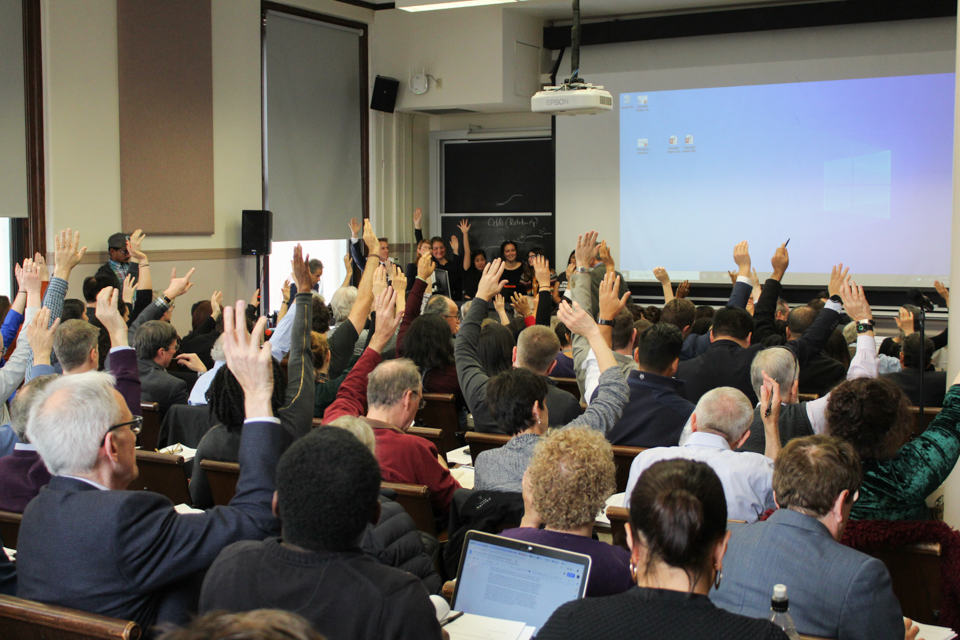 The University Senate passed a resolution to recognize Indigenous Peoples’ Day which will be celebrated annually on the second Monday of October.

In an eventful and historic plenary, the University Senate passed a resolution to recognize Indigenous Peoples’ Day to be celebrated on the second Monday of October every year, while later issuing a special election for the chair of the Executive Committee—nullifying a previous appointment for the first time in Senate history—on Friday afternoon.

The meeting also saw a unanimous decision to extend the tenure clocks of tenure-track faculty who are new parents, allowing faculty with multiple newborn children to extend their leave of absence on parental leave.

The vote to recognize IPD follows a series of student-led movements to pass the initiative, in addition to years of student activism. Last week, Columbia’s Native American Council organized a day-long tabling event in an effort to rally students to pen statements advocating for official recognition to the University Senate. Student leaders in NAC appeared as guest speakers at the Senate meeting, testifying on the importance of recognizing the continued resilience and presence of indigenous people.

“It's a day of recognition of indigenous presence and solidarity. It is a day for indigenous people across the continent to celebrate their continuous existence and their indigeneity,” political chair of NAC Kellian Staggers, CC ’22, said. She added that Indigenous Peoples’ Day is currently officially recognized by more than 100 cities, states, and universities. Columbia’s recognition of Indigenous People’s Day follows that of four of its Ivy League peers, including Harvard and Princeton.

Community chair of NAC, Abigail Hickman, CC ‘21, noted the importance of the University's recognition of IPD in sending a message to indigenous students across the nation.

During the discussion of the resolution, Law School professor Andrzej Rapaczynski proposed an amendment to concurrently recognize Columbus Day with the recognition of Indigenous Peoples’ Day in “appreciation of the deep ethnic and cultural diversity underlying the history of the United States.”

In response, various presenters and Senators spoke on their opposition, citing Columbus’s legacy as a violent and hostile figure to many communities, on campus and beyond.

“There is no way to recognize the history of indigenous people without the presence of the violence committed upon them by Christopher Columbus, so I find it deeply disturbing that they have to compromise even further from the initial statement that they made,” she said.

“I must say that as a member of the Senate, I would be very much opposed to any resolution passed by the Senate that has any kind of celebration of the Christopher Columbus day. That should never be the case, it's not something to be celebrated,” added Neslihan Senocak, a professor in the History department.

Ultimately, the resolution was passed with 68 in favor and six abstentions. Rapaczynski’s amendment was not included.

At the meeting, the Election Commission also announced their decision to nullify the results of the recent vote for chair of the executive committee, now occupied by Jeanine D’Armiento, Columbia University Medical Center professor and a long-serving member of the committee, which sets the agenda for each plenary meeting and works closely to communicate Senate matters to Columbia’s board of trustees.

The Election Commission’s announcement followed a complaint submitted by former executive committee chair Sharyn O’Halloran, who held the position for close to a decade before getting voted out in September. During the last Senate plenary, O’Halloran stood to not approve the roster of the Senate as stated, citing irregularities during the election process, instead motioning to vacate the election.

Standing chair D'Armiento stated that the election had already been challenged in front of the Elections Commission, and emphasized that until the Commission rendered a decision, the Senate should proceed with business. The motion to approve the roster was approved by a vote of 49 to three to five.

O’Halloran once again stated the necessity of integrity and transparency in the elections process.

“It is absolutely clear that we needed to change our policies and procedures to allow for the expandage of suffrage and the inclusion of what is absolutely important, which is every vote in the University Senate is represented. The chair of the Executive Committee represents everyone, not just the tenured faculty.”

Her statement received pushback from senators, who spoke to the fact that the nature of the election processes has always remained the same over the years, while the only distinguishing factor of this year’s results was O’Halloran’s departure as chair. Andre Hsu, GSAS Senator, also questioned why the complaint regarding Senate voting representation did not arise until September, when there were two candidates running. Tsu's comments were applauded by various members of the Senate.

In response to Tsu, O’Halloran emphasized that she has made a personal effort to have the faculty caucus nominate and elect the chair instead of just tenured faculty in the executive committee.

James Applegate, executive committee member and faculty senator who has served for over two decades, noted that he personally ran a number of elections incorrectly when he was in the role. He dispelled any notion that there were intentions of disenfranchising people in the election process.

“I can confess to you that I did not look at the elections code to figure out how to run elections, I simply assumed the people who had run the entire committee following me ... they knew what they were doing and I was just doing what they did,” he said.

Miranda Rehaut, a representative of the Election Commission, added that in the their review of the matter, there was no evidence of intentional malice.

“I want to make it abundantly clear that in our investigation we found absolutely no intentional wrongdoing, and we fully stand behind the senate staff who ran this election and we have full confidence they’ll continue to run elections clearly and competently,” she said.

Also passed during this month’s plenary were the naming of the pharmacology department to the Department of Pharmacology and Therapeutics, a unanimous decision for the extension of tenure clocks for tenure-track faculty who are new parents, and a resolution to encourage voting at Columbia.

The childcare resolution will now lift the two-child limit on extending the tenure clock for parental leave of tenure and tenure-track faculty, meaning that faculty who have more than two children in one birth will be able to take more time off during their parental leave. One faculty senator noted the need for additional monetary support for childcare for faculty with children, and proposed the University create a collective fund to support faculty who have to pay for childcare while away on work-related events.

In the past, faculty have cited various challenges in raising children while also maintaining an academic schedule particularly pointing to insufficient financial support provided by the University for faculty parents.