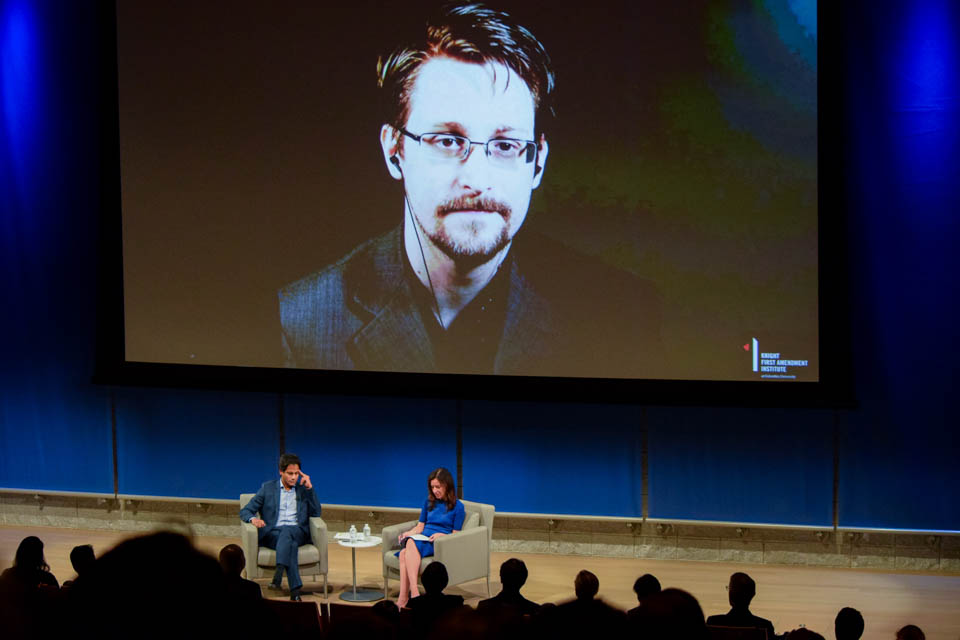 The event centered around Snowden’s perspective on Internet anonymity and the reasoning behind his decision in 2013 to release classified information from the National Security Agency to a group of journalists from The Guardian and the Washington Post.

Former CIA employee and intelligence contractor Edward Snowden spoke on the relationship between mass surveillance, a global Internet, and eroding democratic rights in lieu of systematic protections at an event hosted by Columbia’s Knight First Amendment Institute on Tuesday evening.

Through public programming and education, litigation, and research, the Knight Institute aims to defend freedom of speech and press in the digital age. In 2019, the Institute won a landmark ruling in the Second Circuit Court of Appeals, establishing President Donald Trump’s Twitter account as a public forum and declaring his practice of blocking users unlawful. Director Jameel Jaffer, who previously served as director of the ACLU’s Center for Democracy, was instrumental in the ACLU’s decision to represent Snowden in and directing the organization’s litigation related to NSA surveillance.

Snowden appeared to the audience via video monitor in the Manhattanville campus’ Forum, where he answered questions from Jaffer and the New Yorker staff writer Amy Sorkin from his apartment in Moscow. Knight Institute Litigation Director Alex Abdo, whose previous work at the ACLU related to issues of encryption and online anonymity, introduced the event.

“Snowden’s decision six years ago … raises a number of weighty free speech questions. What’s the proper scope of government secrecy? When, if ever, should we rely on whistleblowers to inform the people of governmental abuses?” Abdo said.

The event centered around Snowden’s perspective on Internet anonymity and the reasoning behind his decision in 2013 to release classified information from the National Security Agency to a group of journalists from The Guardian and the Washington Post. This sparked a cultural discussion around mass surveillance and the lack of structures that are in place to protect the public from covert government action in relation to the Internet.

In regards to experiences that would contribute to his ultimate decision to release classified documents to journalists, Snowden addressed his decision to join the CIA and sign up for the military after 9/11 in the runup to the Iraq War. He attributed the career choice to his misunderstanding of the broader “system,” and a lack of skepticism with regards to the government.

“But the more I became exposed to operations,” Snowden explained, “the more I saw contradictions between the value of what we were doing and the costs of it. And nowhere was this more clear than the human costs of it.”

Snowden said that these first glimpses originated when he began doing service overseas because he had “no choice but to be curious” upon encountering so many foreign perspectives. Ultimately, through working on disparate projects across national surveillance as a contractor with the NSA, he came to learn the bigger picture: that with the development of Internet forums and surveillance technology, the government had slowly expanded surveillance programs to collect information on all members of the public.

However, he also noted that these programs had not been passed through Congress or with involvement of the courts, and were instead retroactively communicated to only a few senior congressional representatives and government officials.

“Now you have a system that affects all of us. … It is [a] structure of power that is entirely controlled in secret, and now the public has no way to understand what’s going on and no way to speak up about it. It is redefining the boundaries of the Constitution—and really, our national processes broadly—and we weren’t asked if this is OK. We weren’t granted a vote,” Snowden said.

In regards to why he gave documents to journalists rather than go through “official” channels to report wrongdoing, Snowden cited the fact that those channels—which require a “whistleblower” to report something to their supervisors—were ineffective. Alternatively, he cited an example where CIA Senior Executive Thomas Drake reported mass surveillance programs to NSA’s legal council, the Inspector General of the Department of Defense, and the House Intelligence Committee, and was ultimately charged with crimes of retaining documents allegedly related to national defense and obstructing justice, among other allegations.

Snowden ultimately warned the audience against becoming a complicit part of the broader systems that allow for violations of fundamental constitutional rights.

In response to audience questions, Snowden encouraged younger generations to participate in reforming the system outside of the system, rather than to allow broader structures—such as the government—to slowly shape optimism into passive cynicism.

“We are never more than one decision away from making the world better,” he said. “It’s not enough to believe in something. You have to stand for something to make a difference.”