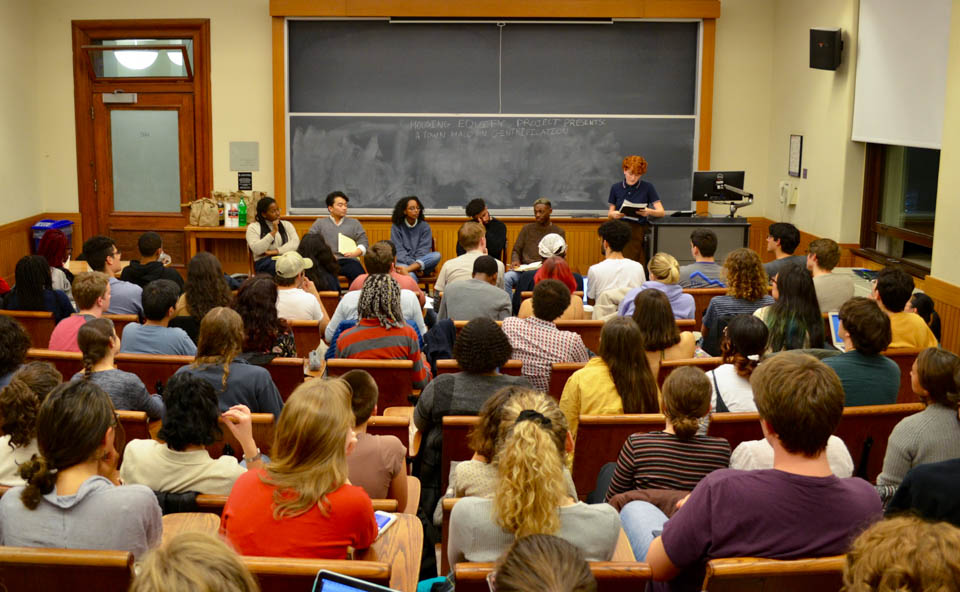 HEP’s panel consisted of a number of students who have looked at Columbia’s history in their own experiences at the University.

The Housing Equity Project (HEP) hosted a paneled town hall on gentrification which incited conversations about Columbia students’ roles in holding Columbia accountable for its Manhattanville expansion, and the impact it has on the community of West Harlem.

HEP is a student advocacy group that aims to utilize volunteerism and community organizing to lessen the impacts of gentrification on West Harlem caused by Columbia’s expansion through the Manhattanville campus.

Columbia’s $6.3 billion Manhattanville expansion acquired 6.8 billion square feet of land in the neighborhood of West Harlem with the aim of providing space for research opportunities for Columbia professors and students. Students and faculty, however, have also pointed to the campus as evidence of Columbia’s responsibility in displacing residents and erasing the culture and history of Harlem.

In an effort to mitigate the University’s impact on the Harlem community, University President Lee Bollinger signed the West Harlem Community Benefits Agreement (CBA), an agreement between the University and the Manhattanville and Harlem communities. The CBA documents a series of commitments the University has made to combat the displacement of the communities living there, by allocating $150 million to provide amenities and community benefits. These benefits include the Affordable Housing Fund, $10 million dedicated to creating affordable housing for individuals displaced by Manhattanville construction, and educational and extracurricular programs for the community’s youth.

The West Harlem Development Corporation, which is tasked with the implementation of the CBA, has listed the Affordable Housing Fund as one of their top priorities in their second third-year report released this year. Despite efforts to obtain affordable housing units, there have been difficulties with establishing deals and resolving questions by vendors.

The conversation opened with a question about the tangible effects of the Harlem expansion on the residents of Harlem. Though the panel did not have any Harlem natives, Campbell spoke about the visible displacement of the homeless population in Morningside Heights.

“There are a bunch of homeless people that live right outside of Morton Williams and the church steps,” Campbell said. “If I give them cash there are only two establishments on Broadway that they can actually spend that cash in. Essentially, it’s forcing them to leave this area and go somewhere else.”

Spruill described that after her first tour at Columbia, she and her mom ate at McDonald’s because it was the only place her mom could afford. After Columbia announced it would redevelop the McDonald’s, Spruill was forced to consider the impact it would have on her family had they been Harlem residents.

“If I lived in New York City and had not gone to Columbia, that’s where my mom and I would be for most of our meals,” Spruill said. “That’s something I would encourage people to do whether you belong to low-income or communities of color—to not forget that that would be you.”

This led to a conversation about Columbia students’ responsibility to use privilege and their position in Columbia to mitigate the effects of gentrification and hold the University accountable for the expansion.

Haile stated that students should not insert their own voices and assumptions into the narratives of Harlem residents who are actively trying to combat gentrification.

“Harlem is not ours,” Haile said. “The best that we can do is amplify their voices and not just take it upon ourselves to save this community. They don’t need saving, they need us to stop meddling with what they have going on.”

Campbell called students to check their intentions and privilege and stated that the University functions as a corporation that students must hold accountable.

“I think in a lot of ways, students forget that Columbia is a corporation and they are masked as a school, and as long as they’re masking as a school students are the lifeline of this institution in every single way,” Campbell said. “We have more power than I think we give ourselves credit for.”

An audience member questioned whether or not pushing back against the Manhattanville expansion would sacrifice the academic standing of Columbia, while competing against other expanding universities. This was met with a discourse of elitism and whether or not Columbia’s academic competitiveness outweighs the displacement of a community.

“We don’t deserve it more than they do,” Haile said. “There’s no way to be neutral—either you’re going to feed into this elitist notion and cycle, or you’re going to help these people who are being displaced by us exploiting them.”

Haile proposed that students must work in conjunction with the people of Harlem and be willing to sacrifice their position in the Columbia community to effectively mitigate gentrification. The panel referenced community resources such as the Schomburg Center for Research in Black Culture and Harlem Grown as ways for students to volunteer.

“No social change has been accomplished without people sacrificing their standing,” Haile said. “We have to put ourselves on the line so that more people aren’t displaced and more people’s lives aren’t taken by gentrification.”