City votes to stop developers from side-stepping community board feedback

City votes to stop developers from side-stepping community board feedback 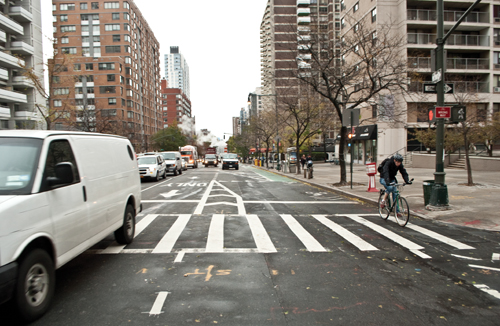 New York City voters approved a ballot measure on Tuesday to give community boards—advisory groups representing neighborhoods throughout the city—more oversight involving developments in their districts.

For developers like Columbia, which stands as one of the largest developers in the community, the new initiative gives community board members more time to review and understand their project proposals.

Though its previous proposals, including past Manhattanville purchases, will not be impacted, new purchases and attempts to change building zoning will be subject to the ballot initiative constraints, said Community Board 9 Chair Barry Weinberg. Community Board 9 is an advisory group representing Morningside Heights and surrounding areas.

This election year, voters decided on five ballot questions that would amend the city’s municipal code, including one that mandates the Department of City Planning to provide a summary of land use proposals—including new developments and projects—to the borough president and board as well as the community board where the project resides 30 days before the application is certified for review by the public.

In addition, community boards will now have 15-30 more days to review proposals submitted in June or July.

The process entails feedback and revisions from the community board, borough board and president, city planning commission, city council, and the mayor. This process takes around seven months, and previously gave community boards 60 days to review project proposals before moving onto the next step.

Previously, developers could submit proposals in June when the community board was on recess, effectively waiting out the 60 day period to avoid presenting to the board.

“I thought the proposal was a really good start at closing some of the loopholes developers use to get around having to present to the community board,” Weinberg said.

Dan Miller, an Open NY organizer, said the ballot initiative will delay housing at a time where the city has fallen short of housing demand.

“Essentially, delay is equivalent to expense,” Miller said. “If you buy a property, you're on the hook for paying for it but you can’t earn any income until you complete the process and start renting it out. That’s rent money that you can’t recoup.”

Laura Friedman, president of the Morningside Heights Community Coalition, an organization in which local stakeholders work to improve Upper West Manhattan, said she supported the ballot because it gives power to community boards who act as a check for the interests of the community and developers.

“[Community boards] look at [proposals] to make sure all the rules and regulations are being followed and that the proposal is good for the community,” Friedman said, “The last thing we need is for developers to take advantage of the community through the administrative process.”