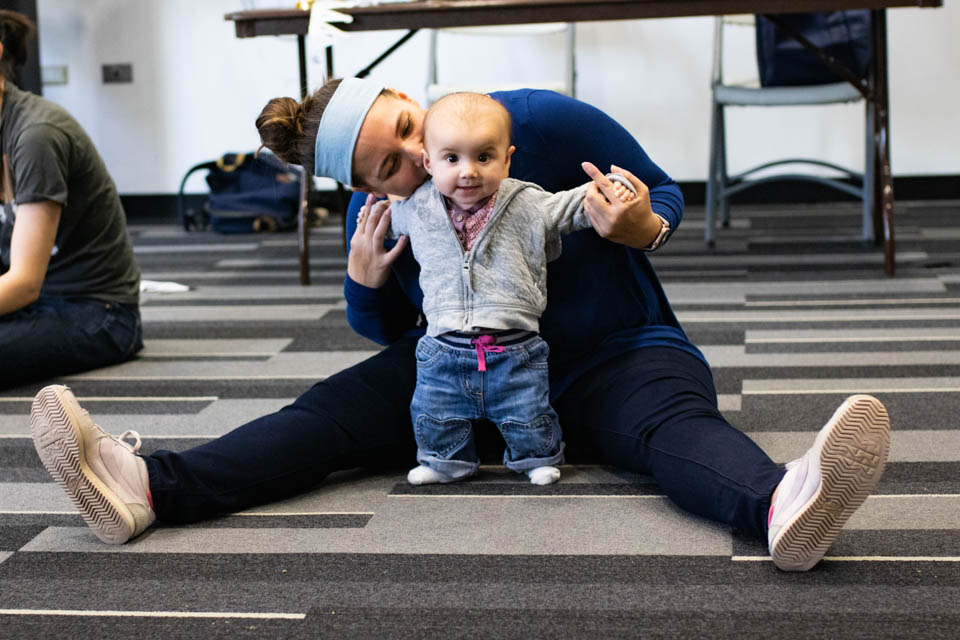 Like many on Columbia’s campus last Friday morning, Violet Krejcie was working hard at learning something new. Her current area of study? High fives.

Student-parents are not a highly visible demographic on campus, in part because they have to dedicate so much time to their children who may not be on campus often outside of classes. But particularly at the School of General Studies, they form a much larger population of the student body than one may assume—a 2015 CUFSN survey of 157 General Studies students found about 50 percent of respondents had children under five, and 20 percent held full-time jobs. Additionally, according to Krejcie, CUFSN has over one thousand students on its mailing list.

CAI was founded by a vote of the SAC in September as part of a push by Law School Senator Tanner Zumwalt, Law ’21, a father. He became co-chair alongside SIPA Senator Jin Han, SIPA ’20, also a father. The Initiative will produce a report for the senate with recommendations on supporting the student-parent community, which sees fewer resources than those at a number of neighboring schools, according to committee members.

“When you have public universities like SUNY [and] CUNY … offering subsidized on-campus childcare and Columbia’s offering nothing, Columbia’s saying that student-parents do not need to apply here. [It’s saying] student-parents who are disproportionately women, single mothers, persons of color, people with incredibly diverse life experiences, you don’t need to come to Columbia,” Zumwalt said at the town hall.

“I want to learn more,” he said. “This is not a one-time conversation, it’s ongoing.”

[Related: Your professors pay more for childcare than you do for tuition. 4 of them explain what this means for their lives, and your education.]

Currently, Columbia offers teaching fellows, doctoral students, postdoctoral students, and students at the Law School limited assistance through Bright Horizons, a nationwide childcare provider. Most eligible student-parents also get 150 hours of backup care per calendar year, for unexpected situations or for care needed outside child care center hours. Law School students receive 60 hours instead, commiserate with most law schools of its caliber. Doctoral student-parents in the Graduate School of Arts and Sciences are also able to receive an annual $2,000 stipend for care.

But no resources offered apply to General Studies or a majority of non-doctoral graduate students, who face obstacles including financial insecurity, missed classes, and barriers to professional opportunities. In addition to not receiving need-blind financial aid, General Studies also sees the highest population of Pell Grant recipients in the Ivy League—constituting over 40 percent of the student body. For father Ceon White, GS ’23, navigating parenthood and his life as a student without strong financial aid has posed a difficult experience—especially as he also works a full-time job.

“As a GS student who’s non-military, that experience is completely different. There’s no allowances for room and boarding or certain things that's allotted, so in most cases you have to work a full-time job, like I work 40-plus hours a week on top of being a full-time student and a parent.”

Meanwhile, student-parents at Columbia are also faced with a twofold setback—not only is childcare vastly more expensive in New York City than elsewhere, Columbia also offers fewer and less extensive resources to student-parents than its peers.

In comparison, Princeton offers yearly grants to eligible graduate student-parents depending on income level, with a maximum of $5,000 awarded. The University of Pennsylvania offers backup care to all full-time non-online students, regardless of graduate or undergraduate status. Similarly, Cornell allows all students to apply for grants to assist with childcare costs.

Columbia’s performance is even surpassed by other universities within New York City. New York University offers all graduate students, not just doctoral students and postdocs, outside of the School of Medicine a $200 a semester stipend. Baruch College offers subsidized childcare near campus, while the Borough of Manhattan Community College offers evening childcare for those taking night classes.

Juggling the needs of a child, their own education, and the costs of living in New York City—notoriously expensive to live in—puts student-parents in tight spots. At worst, some student-parents, such as Zumwalt’s wife, Lauren Jenna Gould, SIPA ’21 and a non-voting member of the Initiative, have had to delay their education in order to care for their children.

“My wife had decided not to pursue an education that year; she was going to stay home with [our son] and she had turned down different job opportunities ... because we realized that we just weren't going to be able to make this childcare thing work,” Zumwalt said.

At the town hall, the Initiative asked attendees whether they would recommend Columbia to other student-parents. The answer was a resounding no. Many, such as Jazgul Kochkorova, SIPA ’21, said they may not have come to Columbia if they knew how little it would do for them.

“It makes me question whether I made the right decision … to have so much debt and not that much support when it comes to back up care [at Columbia].”

Many of these obstacles are exacerbated by the expenses of childcare services, which can cost upwards of $30,000 to $40,000 a year for Columbia’s affiliates. Oh Prema, GS ’20, a single mother of twins, has found the cost of childcare particularly untenable.

"I have a paid internship and I end up paying for a sitter more than I get paid for my internship and so I've taken out a loan to pay for my housing and childcare,” Prema said.

Student-parents also said that available resources such as Barnard Babysitters, which connects Barnard students to parents that need babysitters, is useful, but insufficient. Additionally, it takes three days notice to get an appointment confirmed, insufficient for sudden illnesses or emergencies. The $15 an hour price is significantly higher than Bright Horizons care, which starts at $7 an hour and goes only as high as $12.

Further, even at Columbia-affiliated centers, these services are often not synchronized with the needs of incoming student-parents. While centers have deadlines for applications in December, Columbia acceptances are announced in March or April, meaning that newly-admitted students cannot plan ahead. For Gould, this meant she had to hire a nanny in lieu of the ability to take advantage of subsidized opportunities.

In addition to extending access to Bright Horizons across the University and increasing access to more affordable childcare, student-parents, such as Krejcie, also expressed a desire for a community space they could bring their children on campus. With the growth in enrollment at the University, Columbia has increasingly faced constraints regarding available space on campus both for recreational and academic purposes.

“[What I want] really would be to have a community space … we could go to with our strollers or if we’re running between classes and happen to have our kid with us. A space where we can go and where our kid can be loud or cry. … Having a space for student-parents on campus would be everything for us,” Krejcie said.