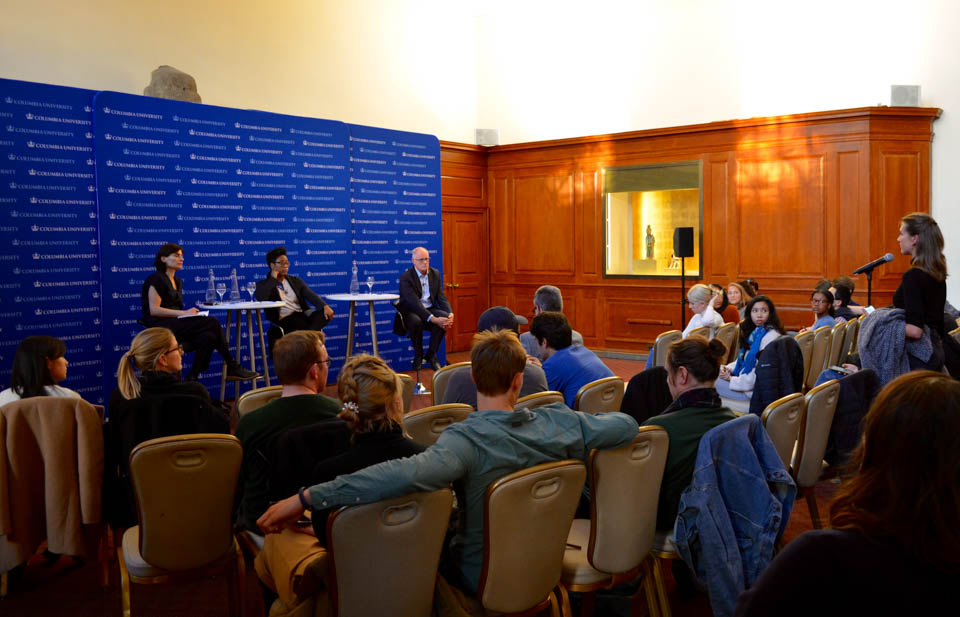 As dozens of students lined up to question members of Columbia’s newly formed Climate Change Task Force at the student town halls this week, many highlighted the urgency for student involvement in conversations around how the University addresses climate change.

At both town halls, faculty and administrators noted potential areas for the University to rise to the forefront of climate conversations, including a “Climate Cafe” for conversations between students and faculty, the establishment of a school dedicated to climate change, and the inclusion of themes of climate justice within Frontiers of Science, a Core Curriculum class mandated for all Columbia College students.

In an email to the student body in September that announced the creation of the task force, University President Lee Bollinger underscored the University's resolve to tackle the global phenomenon of climate change, as Columbia is “one of the leading universities in the world.”

“The sheer magnitude of the problems now facing humanity as a result of climate change has never been greater, and, accordingly, we—as a singularly capable institution in this sphere—have a very serious responsibility to redouble our efforts to advance our knowledge and to help identify solutions and recommend courses of action,” Bollinger said.

In 1996, Columbia affirmed its commitment to sustainability by founding the Earth Institute, an amalgamation of various Columbia departments unified under the goal of educating leaders in sustainability and developing solutions to related issues. In 2017, the University enacted a sustainability plan which outlined goals, including the reduction of all greenhouse gas emissions by 80 percent by 2050 and progression towards a 30 percent carbon intensity reduction. It also expects a second, more comprehensive plan by 2020.

According to Alex Halliday, the chair of the task force and director of the Earth Institute, the newly-created unit will be the main body dedicated to determining how Columbia should respond to climate change. Currently, the task force is comprised of 19 faculty representatives across the schools in Columbia. No students are a part of the task force.

“The idea of the task force, fundamentally, is to figure out what we need to do. The easiest thing to think about is to clean up what we’re doing around the University—decarbonize, introduce people to the subject of climate change through curriculum and courses very quickly,” Halliday said.

When Morgan Margulies, CC ’22, co-director of the Roosevelt Institute’s Energy and Environment Center, first saw the announcement regarding the task force, he set up a meeting with members of the Earth Institute.

“Specifically as an academic and research institution, we can do so much to further the conversation on climate change,” Marguiles said.

However, like other student-activists, Marguilies said he was concerned the University was only focused with broader questions of climate change without addressing its own responsibility in the solution.

“But after this town hall, I’ve been given some optimism that this task force is dealing with the question,” he said.

At the meeting, students said they hoped to see more opportunities to get involved in the University’s task force, interact with faculty and administrators who are close to the decision-making process, and endorse more concrete action by the University to create a sustainable future.

“We need more of a network. There is a Sustainable Leaders Network, but that’s not really accessible to students, especially for Columbia undergrads,” Johanna Klein, SEAS ’21, said. “I think that having an actual network and communication between all students who are interested and advocating and working on climate issues and the University is something that the task force can help us work out.”

Historically, students involved in activism around climate change have held a contentious relationship with the University, culminating in Columbia Divest for Climate Justice’s occupation of Low Library to push Columbia to divest from fossil fuels. This ultimately culminated in Columbia’s decision to divest from thermal coal producers in 2017, the University’s first sweeping divestment from fossil fuels.

The latest iterations of the campaign, the Sunrise Movement at Columbia and Extinction Rebellion, hope to convince the University to sign onto the United Nations’ declaration of a climate emergency and commit to carbon neutrality by 2035. Recent actions of these student activist groups include Extinction Rebellion’s sit-in at Low Library and Sunrise Columbia’s phone banking to call Bollinger, hoping to convince him to support signing the United Nations’ declaration.

At the meeting, a number of students asked task force members whether it would reconsider questions regarding divestment. Committee members emphasized that divestment is an issue that the University has thought about in great capacity.

“But I think there’s a sense where people see a lot of these issues as extremely reasonable and something that we want to do something about,” Halliday said during the town hall on Monday.

In the meantime, the Climate Change Task Force aims to publish a 100-page report on Dec. 1 that aims to summarize the University’s current sustainable practices and provide recommendations to Bollinger on ways that Columbia can become more sustainable, according to Robin Bell, a professor at the Lamont-Doherty Earth Observatory and a member of the task force.

However, students at the town hall noted the absence of action and felt that the University had yet to take significant steps in the fight against climate change—particularly in its plan to reduce its carbon footprint.

In addition to student involvement, others pointed to the fact that involvement from people in the wider Morningside Heights community will be necessary in order to create meaningful change.

“We cannot think about Columbia in the future, or even a climate school in the future, without really thinking about who we are trying to help aid or assist. Any work that actually ends up happening has to reflect the voices of the actual stakeholders in the climate challenge. So you’ve got to look at the young people and communities of color,” Hadia Sheerazi, a SPS graduate student, said.

For Sheerazi, the task force posed a new opportunity for students and administrators to tackle an issue that has historically been a contentious topic.

“A lot of times, there is a sense that there’s an adversarial nature between students and administration, but I think [the task force] is a great way to show this is not the case,” Sheerazi said.