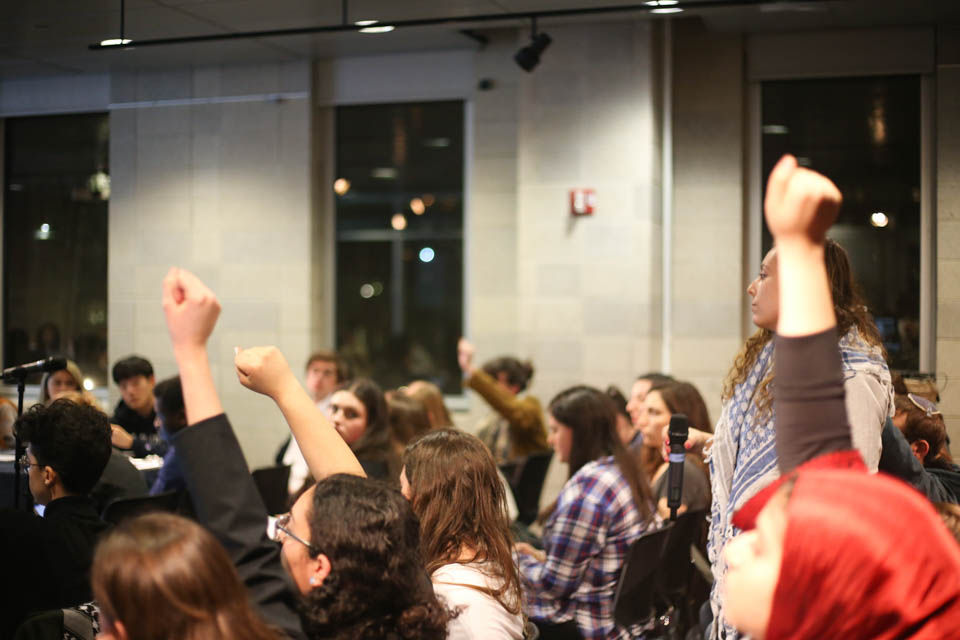 Columbia University Apartheid Divest reintroduced its BDS ballot initiative to support divestment from companies it claims benefit from the occupation of Palestine.

Columbia College Student Council will vote on whether to allow Columbia University Apartheid Divest’s referendum on the Boycott, Divestment, and Sanctions movement in the upcoming election cycle next Sunday.

The referendum, proposed to CCSC again this year after being rejected in both 2017 and earlier this spring, would allow students to indicate if they support or oppose the controversial movement, which is aimed at mobilizing international pressure on Israel in solidarity with Palestinians.

CUAD’s ballot initiative asks CCSC to gauge student support on the question of whether the University should divest “from companies that profit from or engage in the State of Israel’s inhumane acts against Palestinians.” The organization names eight specific companies which it views as contributing to Palestinian human rights violations, alleging that these companies support Israel in supplying equipment used to demolish Palestinian homes and selling weapons used against Palestinian protesters, among other accusations.

If successful, the ballot initiative will result in a referendum on BDS to be presented to the Advisory Committee on Socially Responsible Investing, which evaluates whether community response indicates that the Columbia community is largely in consensus on a given topic, and thus warrants serious discussion on divestment.

CUAD has brought similar initiatives to various student government associations since at least 2016. Over 75 faculty members have signed their names in support of the BDS movement, and in 2018, Barnard students passed a referendum with 64.3 percent of voters in favor of calling on the Student Government Association to write a letter to administrators in support of BDS.

Earlier this year, CCSC voted down the idea of a BDS referendum by secret ballot—20 members voting against it, 17 in support—a slightly closer margin than that in 2017.

After a ballot initiative or referendum is proposed to the council, the language of the proposal is reviewed by both “opponents and proponents” to fine tune and ensure objectivity. CCSC itself will then return with its own version of the proposed referendum, to be voted on this upcoming Sunday. In the mediation prior to Sunday’s election, those who were against the proposed referendum included members of Students Supporting Israel, Aryeh, J Street CU, and Hillel. On the other side were Students for Justice in Palestine and Jewish Voice for Peace, the two main groups whose members constitute CUAD.

Students who oppose the referendum have claimed that it was not nuanced enough and not conducive to productive dialogue. Rather, they fear that it will reduce the entire conversation regarding the relationship between Israel and Palestine to a “yes” or “no” question, especially due to the controversial connotation of the BDS movement. Some J Street members, for example, support some economic restrictions on Israeli-occupied territories, but not on Israel proper.

“It creates a narrative that there are two stances on Israel, which are pro-BDS and anti BDS. And that there is no space for anything like J Street in the middle, because we don’t align with either side,” J Street President Brit Zak, BC ’21, said. “The six people we brought, none of us totally agree with each other on this.”

Further, some pro-Israel activists believe that the debate is not appropriate for a student government setting and could cause the marginalization of Jewish students. President of SSI Ofir Dayan, GS ’21, noted that by leaving the decision to students who may not be fully informed of the history and complexities of the issue, the vote would not be productive.

“At the end of the day, student government is going to vote on something that has vast consequences both for the Jewish community on campus and for people who don’t even know,” she said. “And the fact that we are here sitting 7,000 miles away from these people and making a decision about their future is to me, just insane.”

However, proponents of the referendum argue that students have a right to tell their University where to invest. CUAD cited in its statement of intent the legacy of Columbia Prison Divest, which pressured Columbia to become the first academic institution to divest from the private prison industry in 2015, and Columbia’s divestment from South Africa following student protests in 1985.

“Divestment campaigns don’t target individuals; they don’t target people based on their identity as students of a particular nationality. But it does target companies that are involved in specific practices that I think are outlined really clearly and in my opinion, any person would be hard pressed to stand by,” Nas Abd Elal, CC ’20, said.

“That’s exactly why it’s a campus issue. I think as students, even though we’re only here for a short time, we have a buy-in to this institution. We do benefit from its wealth.”

Pro-Israel activists noted that this was the third time this referendum had been proposed in four years, claiming that it is undemocratic to hold the same election year after year and not abide by its results.

However, CUAD members were adamant that the election was essential to getting the greater Columbia community thinking about the issue at large.

“Columbia is an institution beyond its physical manifestation in New York. It has a name and when it’s involved in practices such as these, across the board, this is something you can’t just ignore,” Ibtihal Malley, BC ’22 and a member of SJP, said.