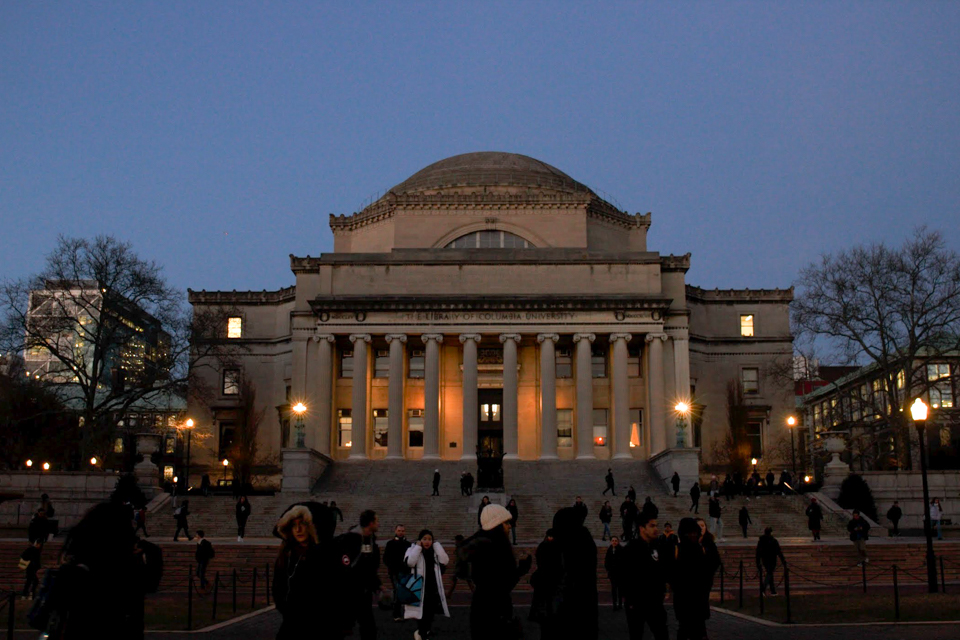 The Alexander Hamilton Medal is awarded to an individual for distinguished service to the College and considered the highest tribute to a member of the college community.

Prior to his announcement, the dinner had already garnered unprecedented $2.35 million to support the College in the areas of financial aid, scientific research, and the Core Curriculum for its centennial anniversary. Prompted by his research background, Yancopoulos dedicated $1.35 million of the sum to support Columbia College students engaged in scientific research.

The Alexander Hamilton Medal is awarded to an individual for distinguished service to the College and considered the highest tribute to a member of the college community. Last year’s event, which honored co-Chair of the University’s Board of Trustees Lisa Carnoy, CC ’89, raised $1.25 million.

Yancopoulos, who is a member of the Irving Medical Center’s Precision Medicine Council and vice-chair of its Board of Advisors, established the Yancopoulos Family Science Fellowship for Columbia College students in 2013. Prior to his professional career, Yancopoulos graduated as valedictorian from Columbia College, where he was a lightweight rower, and the Vagelos College of Physicians and Surgeons as an M.D./Ph.D candidate.

He eventually went on to co-found Regeneron Pharmaceuticals, a biotech company that has developed seven FDA-approved medicines for diseases such as cancer and asthma, as well as one of the main drugs with promise to cure Ebola.

Roy P. Vagelos, PS ’54 and chair of the board of Regeneron, highlighted both Yancopoulos’ scientific talent and his ability to lead. “There are many people who are smart, even very smart ones who come out to Columbia, but he has something very special,” he said.

Citing the “core competencies” of Columbia College, Dean of the College James Valentini spoke to the importance of teamwork and collaboration in Yancopoulos’ approach to his own work, representing the best qualities of a College graduate.

In his acceptance speech, Yancopoulos highlighted the need to be innovative and unified around addressing the “existential challenge to humankind.” He criticized the increased focus on categories of race and sex in contemporary discussion, including at universities, claiming that society’s current overscrutiny of ideas such as white privilege is counterproductive to uniting humanity around real threats. He also condemned universities nationwide for allowing anti-Semitic speakers on campus.

Arguing that humanity has become constrained by labels, Yancopoulos announced a $10 million commitment to creating a new institute around the idea of a “beginner’s mind”—the Buddhist concept of avoiding stereotypes or preconceived ideas that Valentini references in his annual commencement speech. No administrators had been notified of the gift prior to the announcement.

Valentini told Spectator that although he did not know what next steps would be taken with the gift, he would include all undergraduate schools, not just Columbia College, in discussions. He also noted the importance of engaging students.

“I’m stunned and gratified by his commitment to support our propelling way of engaging with the world that I believe is really imperative to the advancement of society,” Valentini said.

James McMenamin Jr., senior associate dean for Columbia College development and senior director of principal gifts, said he was “surprised and delighted at [Yancopoulos’] additional generosity to the college.”

Carnoy added that the contribution was a “really profound” pledge to an important topic.

“I think that it’s a tremendous testament to Dean Jim Valentini and his commitment to beginner’s mind,” she said.

In a later interview with Spectator, Yancopoulos said that he had decided on the commitment earlier in the day when reflecting upon universities’ need to do more in the fight against divisive labels.

“I’m most concerned about the big picture,” he said in response to questions about the specifics of the commitment, such as whether he believed the money should be dedicated to endowing faculty chairs or supporting broader initiatives. “What I am concerned about is taking the best and the brightest minds and teaching them to think outside the box.”

In light of his first-generation Greek background, he credited his family and mentors at Columbia—including faculty and researchers for his undergraduate and graduate careers—for providing him with the perspective and mindset he needed to succeed.

“Today I consider myself the luckiest man on the face of this Earth. As a child, I fell in love with science … and I got to do that and live the American dream, all while being able to give back to the world,” he said.