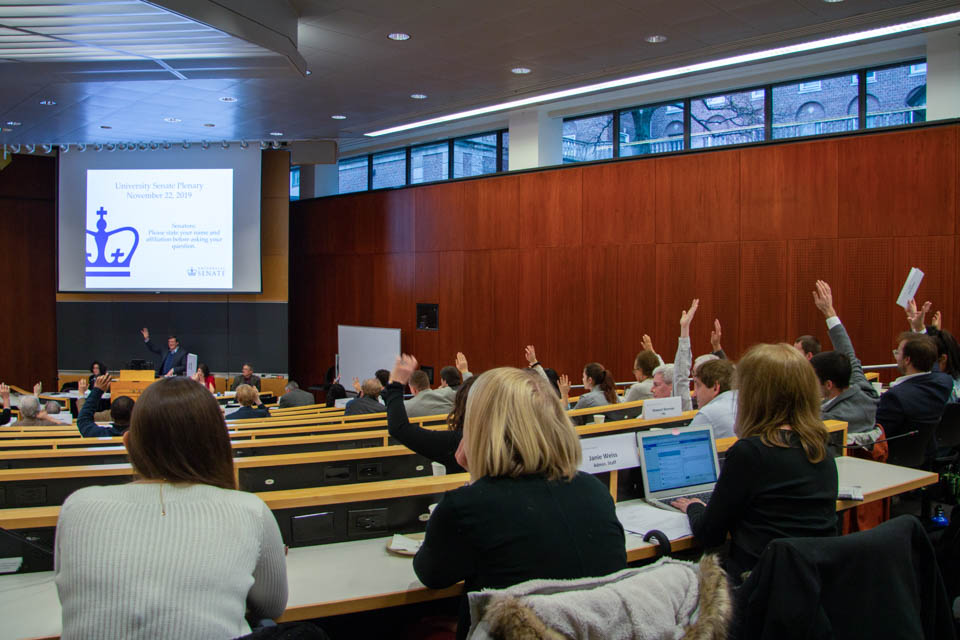 Senators raised concerns surrounding a lack of available campus housing for graduate students and faculty in light of an expanding student body.

Recently, the question of providing more graduate student and faculty housing came to light during discussions about Columbia’s acquisition of the former McDonald’s site at 125th Street. While plans originally outlined the development of a new hotel on the acquired land, senators on the Campus Planning and Space Development Committee raised concerns around the need for more campus housing, and the space has now been dedicated to a multi-purpose high-rise that includes new housing units.

[RELATED: Senate committee on space and development left in the shadows of Manhattanville expansion]

At the plenary, co-Chair of the Senate’s Housing Policy Committee Andreas Hielscher discussed the requirement for Columbia, under agreements made during the Manhattanville expansion, to provide 822 housing units within the uptown campus to support the growing population of residents. However, he noted that the units will not be created for at least five years.

Senator Regina Martuscello, a professional research officer, went on to point out the difficulty that postdoctorate students, and specifically international post-doctorate students, face in finding housing. According to Martuscello, international postdocs often do not have a credit history and are unable to pay with certified checks in U.S. dollars. Postdocs also often do not meet the requirements to rent an apartment in New York City.

In the face of these concerns, the Housing Policy Committee suggested increasing the number of assigned units to postdocs from 420 to 450 and limiting the leases to one year in order to give international postdocs ample time to find alternative solutions and obtain credit history.

The committee also highlighted concerns about housing maintenance, citing the Student Quality of Life Report and Recommendations, a report released by the Student Affairs Committee last year, which analyzed student concerns regarding housing, safety, quality space, and more and worked to address them. In relation to housing, the report suggested improving accessibility for those with disabilities the level of amenities like Wi-Fi and air conditioning.

While discussing lifetime housing policies for professors, some of which guarantee faculty members can stay in their apartments for their entire lives, Senator Mike Ford, GSAS ’21, questioned whether the lifetime guarantee of housing remains if a faculty member is dismissed for research or sexual misconduct.

“That’s a good question, but we can’t answer it,” Executive Committee Chair Jeanine D’Armiento said in response to the question.

An investigation by Spectator earlier this year found that Columbia cannot forcibly revoke housing from tenured professors accused or found guilty of sexual misconduct or harassment, as it is among the rights guaranteed to tenured faculty. In order to do so, Columbia and the faculty must undergo a formal hearing process and multiple rounds of review by University President Lee Bollinger and the board of trustees, a process that has never formally been started.

The meeting also saw a vote to establish the Master of Arts program, which would entail a collaboration between the Graduate School of Arts and Sciences of Columbia and the Aga Khan University Institute for the Study of Muslim Civilisations in London.

The Committee on Education, a subcommittee within the senate tasked with guiding educational innovations from faculty, proposed a five-semester-long program that will allow interested students to study at Columbia for the first two semesters, and then study for a second two at Aga Khan. The proposal comes in light of interest expressed by applicants in Columbia’s existing Master of Arts in Islamic studies program to have a dual program in the field of Islamic studies. Students who participate in the program will spend their fifth semester writing a completion thesis and can reside in either New York or London.

“Both of the master degrees programs are up and running, and its envisioned that this is a relatively small program, roughly five students for years, it is not a tax on the current resources,” co-chair of the Committee on Education James Applegate said.

Also discussed was the difficulty in inter-school communication through emails because of the different cloud continuums that each school within the University has.

“I think this affects the Teachers College and Barnard a lot, but the Google Suite—we are considered out of network for sharing with Columbia which ends up being quite a problem for both of us for sharing stuff across Google,” Senator Oren Ross, TC ’21, said.