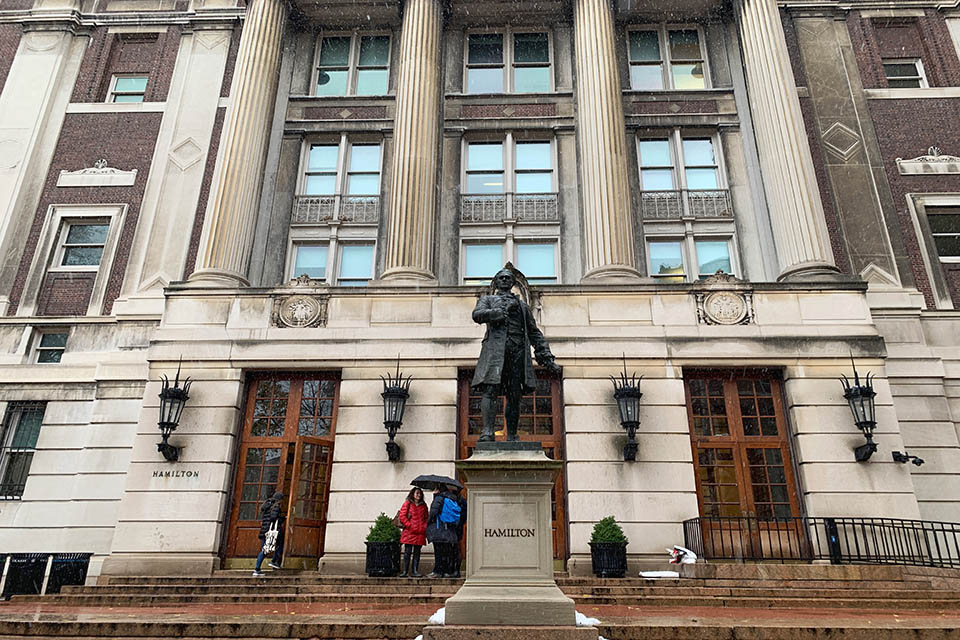 In an effort to integrate the undergraduate communities, a pilot program has been initiated to integrate at least twelve General Studies students into Columbia College sections of Literature Humanities and Contemporary Civilization

For Aaron Stout, GS ’21 and a veteran, Columbia offered a unique opportunity through the School of General Studies to integrate and interact with the larger undergraduate student body both socially and academically, something other universities often do not offer for students in continuing education programs.

When he found out, however, that he would have to take General Studies-only classes for Literature Humanities and Contemporary Civilization—courses advertised as pillars of a Columbia undergraduate education and required for every Columbia College student—Stout felt he was missing out on a critical opportunity.

“This was the one place that was like, ‘You know, we're almost fully integrated.’ So, I wanted to have that experience at Columbia, and it's not to say that I can't have it, but … it’s not exactly the same," he said.

"I don't know too many people that are 18 or 19 or 20, because I myself am 32. I feel like there's something that I could definitely have learned in that class from someone who had a completely different perspective than myself," he added.

According to the Center for the Core Curriculum, the Core is meant to foster an “intellectual and social community.” It is also where “the College realizes most vividly the value of its diversity,” and where conversations “serve as vehicles for individuals from sometimes starkly different backgrounds to experience what it means to see the world through someone else’s eyes.” In light of this mission statement, faculty and administrators have pointed to the value of having General Studies students in Core classrooms due to the diversity of students’ backgrounds.

However, General Studies students have historically been barred from the sections of these Core classes jointly available to students in Columbia College and the School of Engineering and Applied Science. While these students do not have to enroll in Lit Hum or Contemporary Civilization, the courses can fill other general requirements.

For Arina Balako, GS ’19, the separation of Lit Hum and Contemporary Civilization sections resulted in her decision not to take the courses, as she wanted other opportunities to engage fully with other undergraduate communities.

Gregory Brook, GS ’23, who is currently taking a General Studies-only section of Contemporary Civilization, said that the chance to hear the thoughts of students from a different background would be invaluable in academic discussions.

“Seventy percent of my Contemporary Civilization class were in the military so we all kind of understand each other, which is good, but on the same token, I'd like a different perspective as well,” he said.

“When I taught the class last year with CC students, it was always an aim for me to get to that point where we were drawing on our lived experiences or contemporary events ... but it always took a lot of work to do that. ... This year, I'm finding those connections are made much more quickly."

He noted the discrepancy between the Core’s stated objectives and the separation.

To address these gaps, a number of faculty and administrators across both General Studies and Columbia College, including those within the Center for the Core Curriculum as well as the chairs of Lit Hum and Contemporary Civilization, initiated a pilot program to integrate at least twelve General Studies students into Columbia College sections of the two courses. According to Victoria Rosner, General Studies dean of academic affairs and one of those who spearheaded the integration pilot, conversations about integration have gone on for years, but this year felt like the right time to take action in light of the Core Centennial celebration.

“I think that there's a general realization that having the integration of Columbia College students and General Studies students in the same classrooms is of tremendous value to both schools,” she said.

In regard to the intent behind the initiative, Chair of Contemporary Civilization Emmanuelle Saada also highlighted the opportunity for Columbia College students to benefit from increased diversity in dialogue and strengthened community across undergraduate schools through these sections.

“There's a very strong component of the program which is the idea of building a community and so that's why ultimately I think [Columbia College] students and General Studies students in those sections is good,” she said.

For students in integrated classes, such as Mackenzie Collins, GS ’22, the opportunity has made him feel more like a part of a Columbia community in his initial weeks at the University.

"I think it really helps, especially my first semester coming here, to have a class that's so small and be integrated with other students. It helps me feel like this is where I should be. ... It really helps me feel ... kinda like I belong [here]."

Faculty teaching integrated sections also point to that diversity as an asset to the classroom. Michelle Chun, a Core Lecturer who teaches Collins’s section of Contemporary Civilization, spoke about how her experiences teaching an integrated section. She says that the experiences of General Studies students have given them insight into certain claims by authors.

As for what effect the integration has on Columbia College, some students have made friends with their General Studies peers, thereby further integrating the two communities. Speaking on her thoughts about the separation, Sydney Contreras, CC ’23, expressed a desire to see the integration proceed further, calling it a “disservice to students” that nontraditional perspectives are not being included in the classroom.

“We're all teenagers for the most part. We don't really have this very wide view of what's going on, and it sometimes shows in the ways we discuss texts,” Contreras said, adding, “I think having General Studies there could offer more perspectives even on the smaller things in the texts.”

In response to questions about how the pilot may expand class sizes for the two courses, which are stretched thin with a lack of space and instructors, Rosner acknowledged the concern but said that number of General Studies students in the program does not warrant concerns about resource limitations at the moment.

“If that situation changed and we had many, many more [General Studies] students taking these courses, we would need to develop additional sections and that would certainly introduce a question of resources,” Rosner said. “But we're really not even at the point of asking those questions.”

Collins also noted that the definition of General Studies representation within the classroom should be expanded, drawing from his own experience as only one of two General Studies students in his class. According to Rosner, the intent of the pilot was for students to all be taking the same section, the students spread out across various classes to accommodate their schedules.

“If you're gonna do it though, [don’t] just put a handful, one or two GS students in each class—really make it integrated, really make a move to have even class sizes, even rather than just a handful of kids here and there,” he said.

In regards to the future of the program, Rosner said that there are definitive plans to expand into a second year, but that otherwise, nothing had been decided.

“It's really more something that we're trying out with the integrated sections, seeing what the value is, continuing the conversation and taking our guidance from experience.”