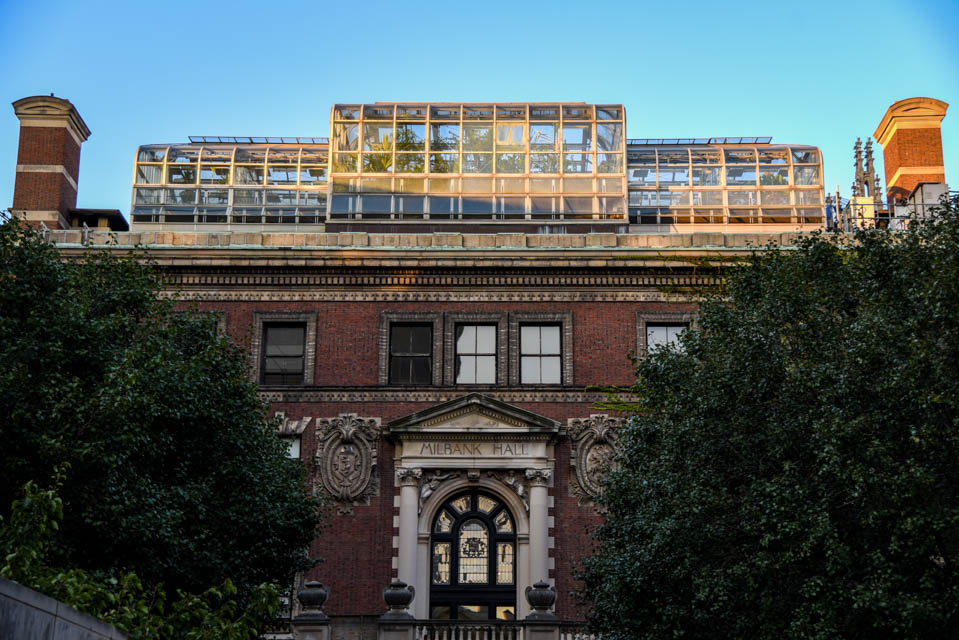 Student activists praised Barnard for taking an active approach to improving sustainability on campus, which they contrasted with Columbia’s proposal to create a climate change school.

Barnard President Sian Beilock announced updates regarding the Climate Action Vision—a number of initiatives to combat climate change on Barnard’s campus—and shared data on the college’s divestment plan in a letter to the Barnard community on Tuesday morning.

Barnard’s Climate Action Vision is the result of a campus-wide effort over the past two years to define Barnard’s strategies for addressing climate change in the areas of academics, finance and government, and campus culture and operations.

“The urgency of this crisis demands action that redefines leadership, crosses disciplinary and intellectual boundaries, and addresses the structural inequalities that contribute to our current global predicament,” Beilock wrote in her introduction to the report. “As a college for women located in New York City, Barnard has a responsibility to address climate change—especially as it relates to issues surrounding gender, income, and race.”

In particular, she also highlighted how the college’s plan of action “prioritizes the role of women, people of color, and low-income communities in defining new paradigms for climate leadership.”

In recent weeks, climate change protesters at Columbia and across the country have called on colleges and universities to play a greater role in taking steps to reduce their carbon footprint and address climate change. Members of Extinction Rebellion completed a weeklong sit-in and hunger strike in Butler Library in November, calling on Columbia to declare a climate emergency, commit to achieving net-zero greenhouse gas emissions by 2025, and divest from fossil fuels.

The announcement of the report follows Barnard’s consistent moves to tackle climate change in the past decade. In 2009, Barnard joined New York City’s Carbon Challenge—a citywide initiative launched to reduce greenhouse gas emissions by 80 percent by 2050—and has reduced greenhouse emissions by 30 percent compared to its 2005 standards. In March of 2017, the college moved to divest from companies that deny climate science following over a year of pressure from student activists.

In Barnard’s report, Beilock again emphasized that the college is committed to incorporating sustainability into its financial decision-making and released the Climate Science List—a 400-page report that evaluates 30 fossil fuel companies and their commitment to climate science and sustainability. The report is based on a number of criteria, including the company’s position on climate science and the measures that the company is taking to reduce its carbon footprint.

In making this list public, the report said, the college hopes “to influence (and provide support for) other institutions’ investment decisions.”

Student groups such as Columbia Divest for Climate Justice have called on Columbia to divest from fossil fuels, and following student protests in 2017, the University announced plans to divest from thermal coal production, a plan it has also publicly released through the Advisory Committee on Socially Responsible Investing. However, the University has not yet released an announcement on its plans for total divestment, leading to continued protests from student groups.

The report highlighted the role of faculty, staff, and students in pursuing creative solutions to address climate change at Barnard, and noted that the college is developing a plan for emissions reductions in its campus operations.

Meanwhile, according to Columbia’s second Sustainable Columbia Annual Progress Report released in 2019, the University had achieved “100 percent zero emissions” in regard to renewable electricity in 2018 and had reduced its carbon emissions by 47 percent. The report also stated that the University would “begin to prepare our roadmap for becoming operationally carbon neutral.”

The report also shared plans to explore the possibility of adding a general education requirement that students take a course on the environment and sustainability.

“I love the idea of having a climate change class in our Core curriculum,” Abby Kleiman, BC ’22 and a member of the Columbia chapter of the Sunrise Movement, said of the proposal. “It’s the most important issue of our generation and everyone at the school should have a solid background in it.”

In October, the Office of Sustainability and Climate Action at Barnard also announced updates to their climate change programming, such as the creation of the Student Climate Change Grant, which aims to allow students to take on new projects or develop existing programming tackling sustainability.

The students noted that their efforts to meet with administrators have found much more success at Barnard than at Columbia. In 2017, the college announced the creation of a new administrative position—director of campus sustainability and climate action—as a response to findings and recommendations from the Barnard Presidential Task Force to Examine Divestment, published in December 2016. Earlier this year, a full-time associate director of campus sustainability was also appointed.

“Barnard has definitely been more receptive and open to working with students,” Kleiman said.

When Kleiman and fellow members of the Sunrise Movement emailed Director of Campus Sustainability and Climate Action Sandra Goldmark, they were able to meet with her a week later.

Kleiman said that Barnard’s approach to divestment is “a step,” but emphasized that the college should ultimately pursue total divestment from all fossil fuels in line with their activism around Columbia. The Sunrise Movement has called on Columbia to reduce its greenhouse gas emissions to net-zero by 2030.

“We should be divesting from fossil fuels, not just [fossil fuel] companies that say they are environmentally conscious. It’s a paradox and in most cases untrue. It’s a step but it’s in no way all that the school should be doing,” Kleiman said.