First-year Barnard student remembered for her energy and passion

First-year Barnard student remembered for her energy and passion 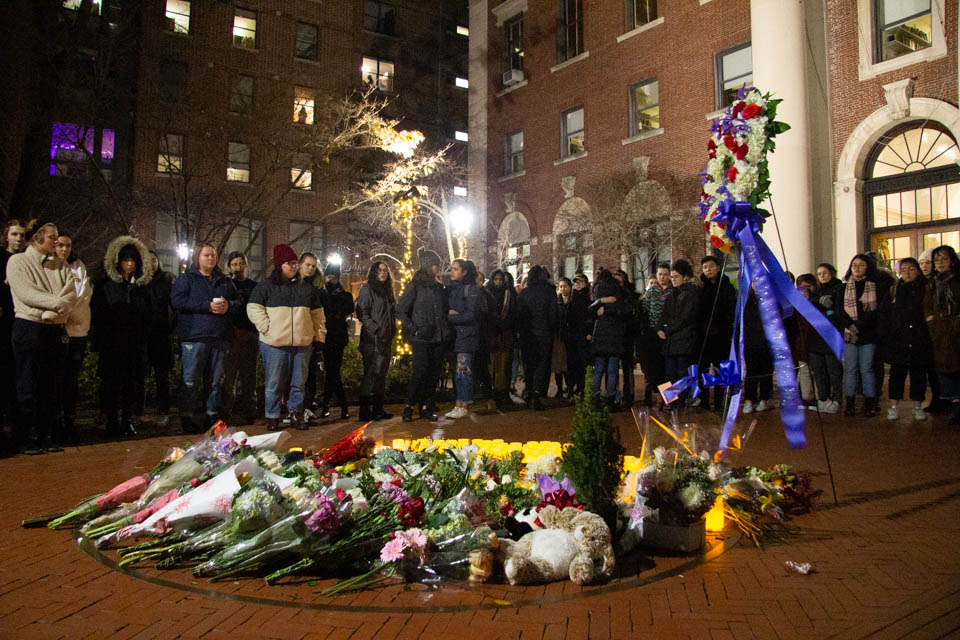 Hundreds of students and faculty mourned the death of Barnard first-year Tessa Majors at a vigil held in her honor on Thursday night.

Across campus, thousands of students, administrators, and community members mourned the death of Tessa Majors, a Barnard first-year, who was described as full of life and love for music at a vigil held in her honor on Thursday.

Hundreds gathered inside and outside of the Diana Center at 7 p.m.—spilling all the way out to the Barnard gates—to honor Majors, who died Wednesday night after sustaining multiple stab wounds during an attempted robbery in Morningside Park. She was 18. Patrol officers have been stationed throughout Morningside Heights in light of the incident.

Community members lined the Barnard crest at the main gates with flowers and candles throughout the afternoon and into the early evening on Thursday. Many paused on their way to and from the vigil to share a moment of silence.

As students, alumni, and administrators continued to enter Diana, the main Event Oval and overflow rooms quickly filled to capacity, leaving hundreds unable to hear speeches from University President Lee Bollinger and Barnard President Sian Beilock. In response to student concerns, Barnard administrators said that they would consider sending out a recording after the event.

Beilock, speaking through tears during her entire speech, highlighted Majors’ work as a musician and student as well as her application to Barnard. In describing her “Why Barnard?” essay, Beilock noted that Majors wanted to attend Barnard because she was a “feminist” and was “invigorated” by stepping outside of her comfort zone and by the difficult courses she took in high school. Beilock cited Majors’ previous experience working on congressional campaigns as part of the way she carried out this work.

In her remarks, Beilock urged members of the campus community to take care of themselves and lean on one another in the coming days. She noted that the Rosemary Furman Counseling Center would be open on Friday until 7 p.m. and over the weekend from 11 a.m. to 2 p.m. She encouraged students who need support to use these and other counseling resources.

Bollinger, who lives just yards away from the Morningside Park entrance where Majors was found after the incident, noted that the 116th Street entrance to the park would forever remind him of the tragedy.

“All of the horror that encompasses this death should not and cannot detract from the appreciation of Tess Majors, the person. Tess must have been extraordinary. I am slowly beginning to get a glimpse of a brilliant young individual. And I am eager to learn more, because Tess will be in my mind, and our collective minds, for a long time to come,” he said.

At the conclusion of the speeches, attendees were encouraged to have a meal from one of the many food stations set up throughout the building in lieu of Barnard’s end-of-semester tradition of Midnight Breakfast.

Among others present at the vigil were a host of Barnard and Columbia administrators, including Chair of Barnard’s Board of Trustees Cheryl Glicker Milstein, Dean of Barnard College Leslie Grinage, the deans of Columbia College and the School of Engineering and Applied Science, and Executive Vice President of University Life Suzanne Goldberg.

Street Corner Resources—a local non-profit centered on improving the quality of life in New York neighborhoods by reducing violence—also held a vigil outside of Morningside Park on Thursday evening, where local residents and SCR members paid their respects to Majors. Representatives, including New York City Councilmember Mark Levine, spoke on the importance of instating new safety measures without creating division in the community.

“Tessa Majors should be alive and back in class today. So we have something to be concerned about: community,” Iesha Sekou, the founder and chief executive officer of SCR, said. “We can’t say ‘Not my child.’ Tessa is all of our child. We can’t say ‘Not my concern.’ It is your concern.”

Students in attendance at the Barnard vigil reflected on Majors’ positive impact on those around her.

Demetrius George, a sophomore at the City University of New York, met Majors exactly one week prior to Thursday during a Columbia party he had been invited to by a mutual friend. The two of them “clicked instantly,” he said.

“She had a level of absolute constant energy,” he said. “She lit up that party. She was great.”

After speaking, the two agreed to start a rock band along with another friend of Majors’, George said. Before they could practice together, however, he found out about her death while reading a newspaper on Thursday morning.

“I broke down in tears. … I only met Tess last week, and we made such good friends the moment we met each other,” George said. “To find out this news was the worst.”

Kira Tsougarakis, BC ’18, never met Majors in person. However, she listened to Majors’ music and said she attended the vigil to honor her memory.

“Listening to her music made me want to know her,” she said. “I’m sad for all the people who didn’t—including me,” Tsougarakis said.