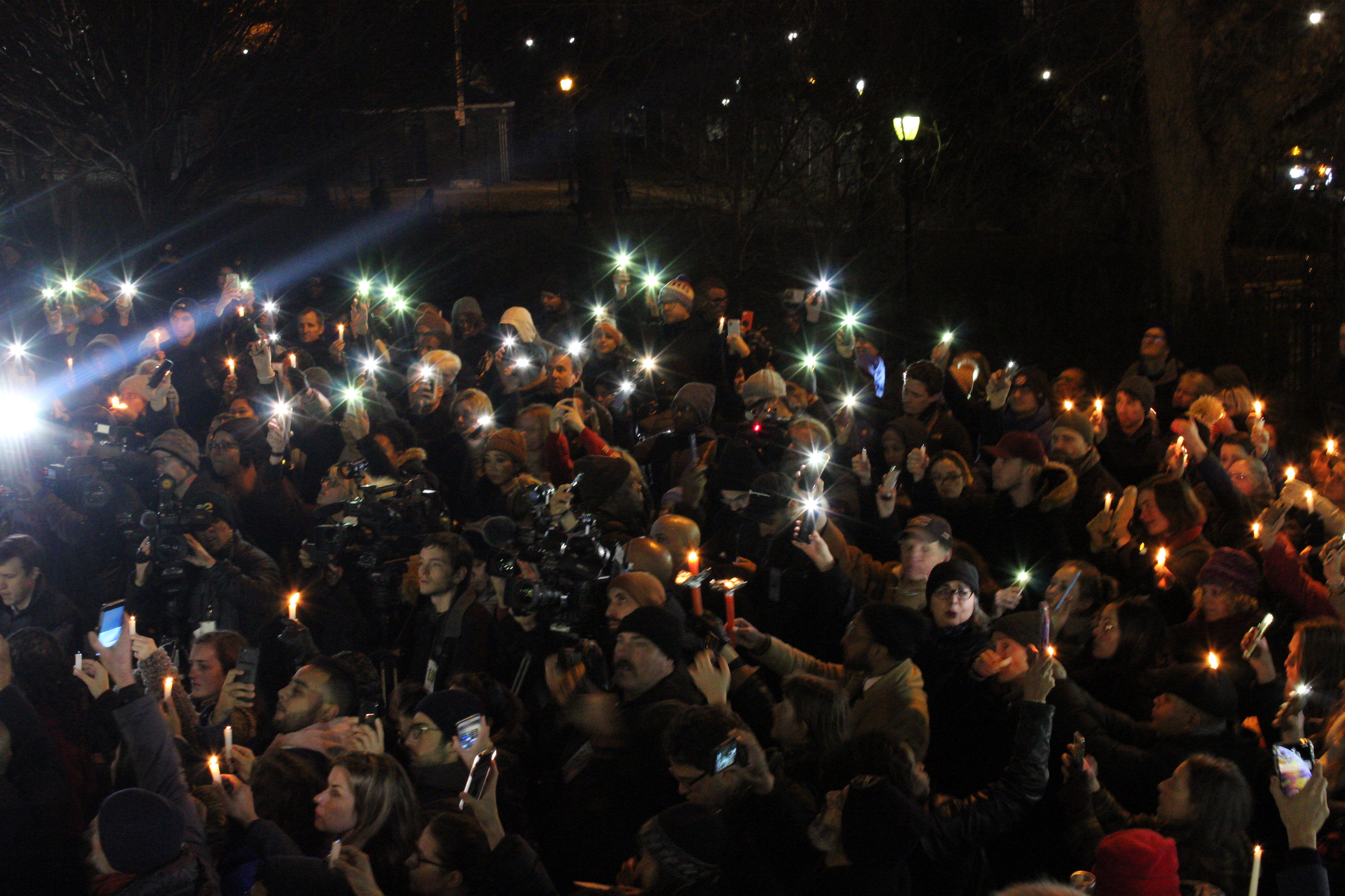 The crowd of students and Harlem and Morningside Heights residents responded verbally to many of the politicians' remarks.

In a series of speeches, representatives including Councilmember Mark Levine and Rep. Adriano Espaillat from the 13th Congressional District proposed different measures to ensure safety in the park, ranging from plans for greater lighting to sustained police presence in the community. Students and community members, however, decried the politicization of Majors’ death, citing the speakers’ push for politically-charged responses without hearing the voices of students or residents.

Sunday’s vigil follows a series of ceremonies held by University administrators and community members in honor of Majors’ life.

Currently, police have reported that the perpetrators of the crime are likely to be within their teens, sparking concerns over due process during the investigation as politicians and community members harken back to injustices in the Central Park Five case. One of the suspects is 13, though no official statement has been made regarding the details that led to his arrest.

A number of politicians used their platforms to advocate for increased patrols in the park. Espaillat described New York’s violent past as a “war zone,” advocating for more stringent policing protocols from previous decades as a possible answer to preventing a return to higher crime rates.

“Police officers walk[ed] the beat. … You knew the police officer by name, he knew the kids in the neighborhood by names, he knew the parents by names. … We need to go back to that,” Espaillat said. A number of attendees cheered for his proposals.

Levine also promoted the presence of patrol officers in Morningside Park on a “permanent basis,” potentially in the form of four Parks Enforcement Patrol officers stationed in the park. PEP officers may not carry firearms, but do carry batons and pepper spray. They have the authority to make arrests.

State Sen. Brian Benjamin agreed with plans to increase patrolling but emphasized the importance of making informed decisions on how to allocate funding toward installing lights and increasing police. Benjamin noted that Columbia, Barnard, and the police should work together in order to increase the safety of the park for both locals and students.

“What we don’t want to do is … just start making decisions without it having be part of a comprehensive plan that actually would make sure students and residents can travel this park safely,” he said.

However, in light of increased police surveillance in the area, tensions between the New York Police Department and residents of the surrounding West Harlem area have heightened over the years. Community Board 9 Chair Barry Weinberg previously acknowledged the need for more safety efforts in Morningside Park but also the need to ensure that “the youth in our community are not improperly treated or harassed in the aftermath of this tragedy” while the officers work to address the incident.

Other city representatives at the vigil addressed the suspects’ potential race and class status, factors that could have contributed to their lack of access to resources, such as educational and recreational programs that have proven to be successful at preventing crime.

According to City Council member Ydanis Rodriguez, the discrepancy in wealth between Columbia and its surroundings in the West Harlem area should prompt people to think about the responsibilities elite institutions have to invest in the communities they occupy.

Levine also mentioned the tragedy of the suspects’ youth.

“Families were destroyed on both sides of this horrible crime. We have failed not just Tess but the families of this community as well,” Levine said.

However, at the vigil, one Harlem resident said she did not feel “healed,” arguing that elected officials leading the event should have offered the microphone to other community members. Members of the crowd declared their agreement as the vigil speakers traded turns at the podium.

When Espaillat spoke to the need for more safety measures within the community, an audience member yelled out, “That’s after school programs!” as an example of an alternative solution to crime prevention that does not involve increased police surveillance. Local anti-violence organizations have long highlighted the role of youth programs, including those like Street Corner Resources, a local nonprofit that aims to address the root of violence by providing young adults with greater access to employment, training, education, and other resources.

“The cure to violence is needed all around the city, not just in a few sites. We need sites in every area where violence has been occurring and to do the prevention work,” Iesha Sekou, the CEO and founder of SRC, said in an interview.

A number of Columbia-affiliates also attended the vigil. Lisa Carnoy, co-chair of the Columbia board of trustees attended on behalf of University President Lee Bollinger and the board. She spoke about Majors, who she called a “feminist, iconoclast, musician, [and] friend.”

"All of the horror that encompasses this death should not and cannot detract from the appreciation of Tessa Majors the person," Carnoy said.

Other Barnard and Columbia students condemned the use of Majors’ death to push policy proposals and political agendas without featuring student or community voice.

Meghan Brophy, BC ’20, said she attended the vigil to pay her respects but was disheartened by the crowd’s response to politicians who advocated for increased policing on behalf of student safety.

“There were people cheering when there were calls for more cops in the park but then getting angry that it was political when [Rodriguez] talked about how we failed the 13-year-old suspect,” Brophy said. “I know myself and a lot of other Barnard students don’t want to see more carceral and policing solutions employed to something that is [as a result of] socioeconomic and political issues.”

Brophy added that had students and members of the community been able to speak, more nuanced perspectives could have been highlighted.

Dominic Walker, a GSAS third-year, said that watching the politicians and audience members cheer for increased policing was like watching “the birth of a real violent streak of violent policing” that harms black and brown communities. He emphasized that such policies do not protect certain Columbia students.

“When people cry out for law and order, I don’t feel safe. I don’t feel safe. I’m a black man. I’m not just a Columbia student—I don’t walk around with ‘Columbia’ written on my head. … When people say ‘We want more police; we want law and order,’ I know what that means,” he said. “That's something that’s part of the history in places like New York City and Baltimore City where I grew up.”