Manhattanville campus plans to make 12th Avenue pedestrian-friendly, but will businesses survive until then?

Manhattanville campus plans to make 12th Avenue pedestrian-friendly, but will businesses survive until then? 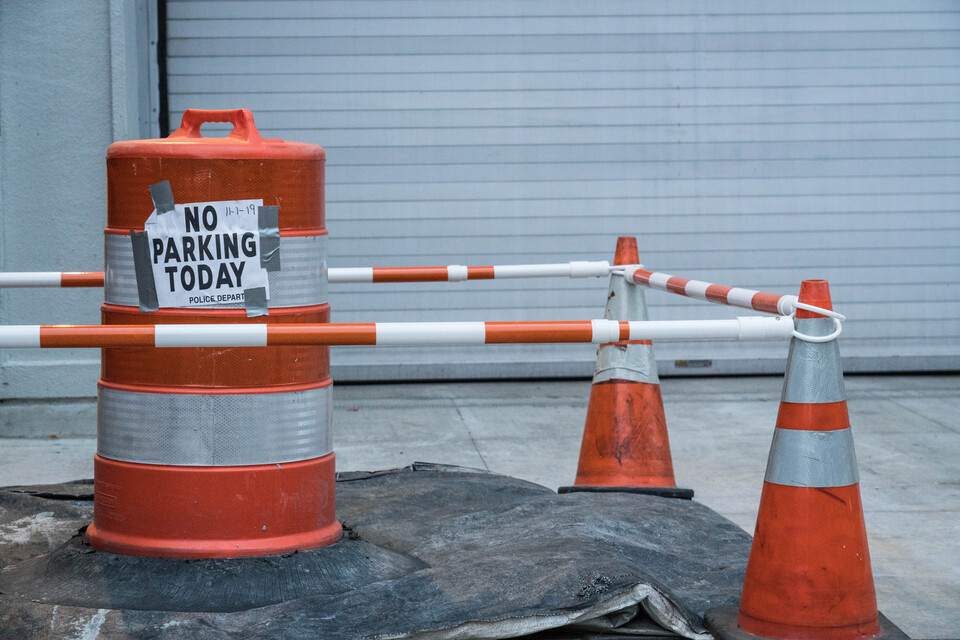 On 12th Avenue, in a once-industrial area that now resides in the shadows of Columbia’s ongoing construction in Manhattanville, business owners largely agree on one factor that has led to a 30 percent decrease in revenue and two closed businesses during 2019: a lack of parking spaces.

On 12th Avenue, in a once-industrial area that now resides in the shadows of Columbia’s ongoing construction in Manhattanville, business owners largely agree on one factor that has led to a 30 percent decrease in revenue and two closed businesses during 2019: a lack of parking spaces.

The 12th Avenue Corridor, which is directly underneath Riverside Drive, is dark, with rust-stained silver arches lining both sides of the street. In an area with little housing, sidewalks mostly lay empty, with few residents who call the Corridor their home.

These businesses have not been located in the Corridor forever and did not move voluntarily. Prior to their relocation, the businesses saw significant traffic from the numerous pedestrians walking on the street, students and residents living in the area, and commuters walking to and from the 1 train—a busy zone uptown.

Starting in the early 2000s, they were pushed from their locations, on Broadway and a different location on 12th Avenue, to make room for Columbia’s 17-acre Manhattanville expansion into West Harlem, a project aimed at creating space for a university in dire need of space to maintain its world-class educational status.

For years after the move, businesses were able to stay open and prosper by changing their identity to become “destination spots,” or places that draw clientele from out of the neighborhood due to their unique style, according to multiple owners and Community Board 9 Chair Barry Weinberg. While the Corridor is not conducive to foot traffic, the area is easily accessible by car, due to its location next to the Henry Hudson Parkway, which allows customers to arrive from other boroughs and New Jersey. 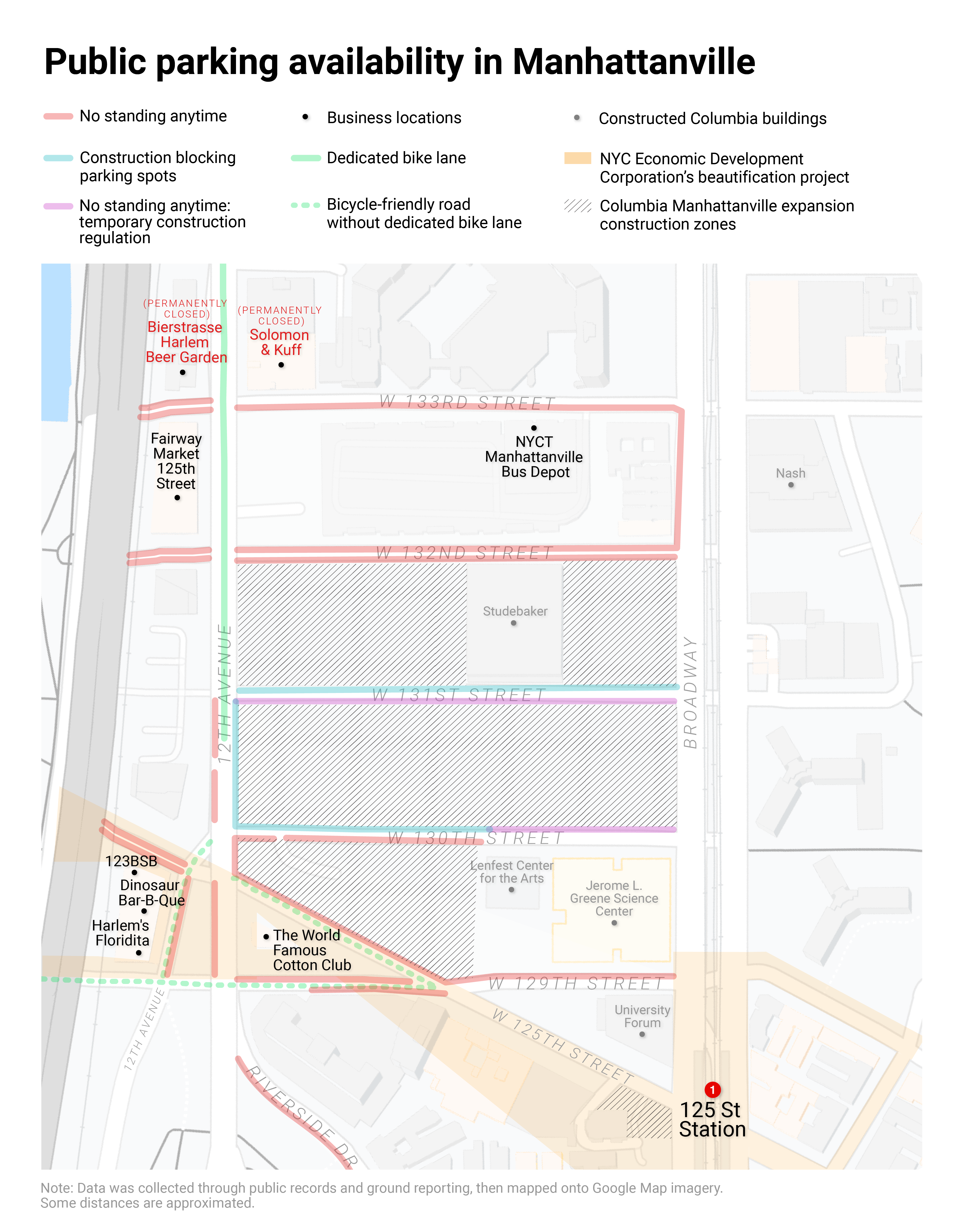 However, in 2015, the New York City Economic Development Corporation installed lighting, seating, planted trees, and removed parking in the area, as part of an effort to revitalize West Harlem and draw more pedestrians to the area. Furthermore, regulations by the New York City Department of Transportation that were imposed because of the construction for the Manhattanville expansion, among a number of other projects, have prevented drivers from parking in much of the area.

For businesses that became dependent on out-of-borough neighborhoods, a lack of parking spaces meant a declining customer base.

“Where we are now is a consequence of this development,” said Ramon Diaz, owner of Harlem’s Floridita, a Cuban restaurant on the Corridor. “We were put here really without much of a choice.”

Columbia did not respond to repeated requests for comment. According to Columbia’s Manhattanville website, future development in the area aims to “revitalize” the Hudson River waterfront park by encouraging pedestrian traffic with better pathways and civic spaces. The University states in its Community Benefits Agreement that it “expects the Project to generate new local jobs and economic opportunities for the benefit of the Local Community.”

Weinberg emphasized that Columbia has continuously attempted to work with the community board to assist local businesses in the area. He also acknowledged that the completion of the University’s Manhattanville expansion along 12th Avenue will result in students and employees frequenting the corridor and will thus increase the appeal to pedestrians.

However, he emphasized that the ultimate vision for the area—which is still years away from completion—will only be accessible if businesses remain alive.

“If this expansion is really supposed to be a win-win for the community and Columbia, then these communities and businesses need to be alive for when that happens,” Weinberg said.

A number of ongoing factors have also contributed to a decrease in parking in recent months. The addition of bike lanes and removal of parking comes in the context of the city’s “War on Cars,” which has aimed to increase safety for pedestrians and decrease residents’ dependency on cars. However, the initiative has had little impact in increasing pedestrian accessibility on the isolated 12th Avenue Corridor, according to businesses and CB9 members, due to construction in the area.

Last Tuesday, a group of neighborhood stakeholders, including business owners and community leaders, met with representatives from the Department of Transportation and Columbia to discuss ways to alleviate parking woes and increase pedestrian access in the corridor, including a name change to attract more visitors. Tricia Shimamura, Columbia’s director of government relations, also said that the University is trying to encourage workers to carpool in an effort to free-up parking.

However, construction of the Manhattanville campus has been an ever-present part of 12th Avenue and has transformed much of the neighborhood into a construction zone, which has decreased pedestrian appeal and further isolated the transit-challenged corridor from the rest of West Harlem.

In addition, the “No Standing Anytime: Temporary Construction Regulation” signs along 130th and 131st Streets that surround Columbia’s construction in Manhattanville led to the loss of parking along several blocks. While these signs are expected to be removed after the expansion is completed, fundraising delays have caused construction on the campus to drag, prolonging the parking shortage.

“We want to make restaurants no longer dependent on parking, but the conditions in the area aren’t conducive to that at the moment. That’s a long term goal, for sure, but we need a solution for now,” Weinberg said.

Diaz said that when his customers can’t find parking, they sometimes cancel their reservations. He said he can lose up to 10 in one weekend.

“In New York, when you’re in a destination spot like this, the only hump is parking,” he said.

In November 2019, Gale Brewer, Manhattan borough president, and Mark Levine, a New York City council member who represents Morningside Heights and surrounding areas, wrote letters to the DOT, alerting them to the challenges created by the lack of parking, as well as urging them to work with construction workers at Columbia’s Manhattanville campus. The few available parking spaces are often taken by construction workers who are not provided parking by their managers, according to city representatives and local business owners.

In response to these letters, DOT commissioner Polly Trottenberg, BC ’86, said the regulations in place were needed to ensure “safe traffic flow.” The DOT also installed parking meters in an effort to increase parking turnover by preventing cars from occupying a spot for more than two hours.

In response, Lizette Lebron, the managing partner of Dinosaur Bar-B-Que, and CB9 members noted that metered parking has still been taken—services like ParkNYC allow drivers to pay for metered parking electronically, so they do not have to move their vehicles.

Diaz expressed the need for cooperation among DOT, EDC, and the University in order to revitalize the Corridor.

“We need cooperation...because we didn’t come here by our own accord,” Diaz said. “We were placed here.”

Correction: An earlier version stated both relocated businesses moved from Broadway Avenue. In fact, only one was originally located on Broadway Avenue