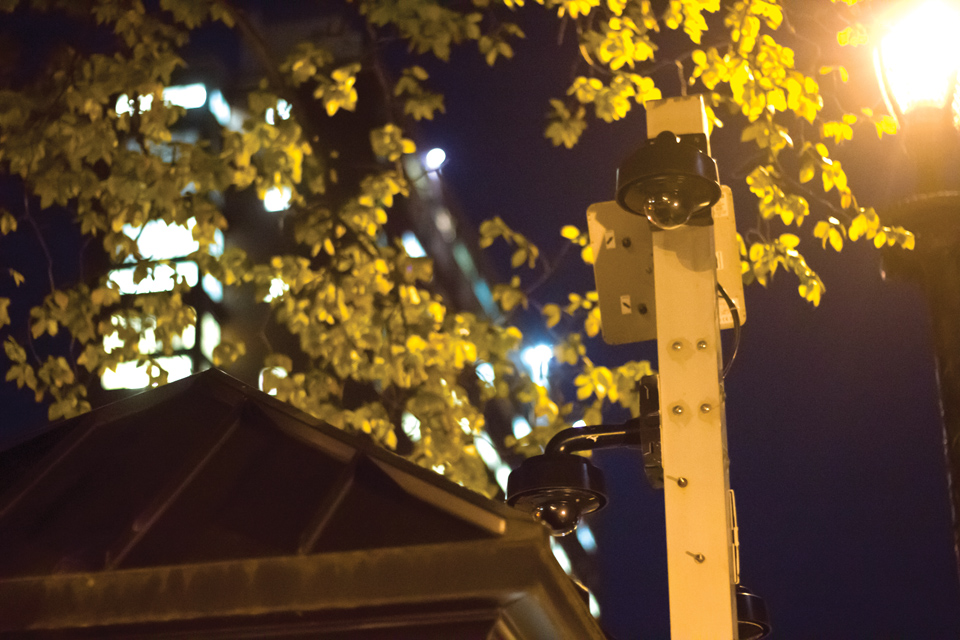 Morningside Park has drawn resident concerns over safety and crime for years.

Riddled with foliage, twisting paths, and dim lights, Morningside Park has drawn concern from residents over safety and crime for years.

The conversation has long been familiar to local residents, community leaders, and nonprofit organizations, which have made repeated requests for park safety efforts ranging from increased patrolling to funding for afterschool youth programs.

Poor sight lines due to the park’s architecture, a lack of consistent patrols, and broken park lights are among the visibility and safety issues, according to Brad Taylor, president of Friends of Morningside Park, a nonprofit started in 1981 by a Columbia College student.

While crime in the last five years has generally decreased, 2019 saw a resurgence in reported crimes with 11 more than in 2018, according to 26th Precinct Commanding Officer Aneudy Castillo.

But for years, city representatives have said that requests for safety improvements would need to be handled out of the borough president’s discretionary funding rather than by the New York City Department of Parks and Recreation.

“When we put in funding requests, they’ll return it with the comment ‘We support this project. However, there’s not enough money in the budget for it,’” said Community Board 9 Chair Barry Weinberg, who is not on the landmarks preservation & parks committee of CB9 but reviews all of the board’s reports. CB9 is a local advisory board representing Morningside Heights and the surrounding area.

This past December, the conversation around safety in the park resurged following the death of Tess Majors, a first-year student at Barnard who was fatally stabbed during an attempted robbery in Morningside Park. Community stakeholders and University affiliates began questioning how to make the park a safer place. Students have long struggled to navigate and understand the significance of the park to the Harlem community, and in the aftermath, some have chosen to reaffirm past fears of the park while others remain unaware of the park’s crime issues.

In a hearing last December, New York Police Department Detective Wilfredo Acevedo testified in a homicide and attempted robbery hearing. Although the detective presented security footage of the incident, the resolution was not adequate enough to incriminate the 13-year-old suspect.

Acevedo said that even though it was already dark, the park lights were not on at the time of the attempted robbery, which would obscure the security footage.

The University has also placed its own security guards around campus and said that it has been in contact with city agencies, though the developments have yet to be specified.

Activists and community members have cited the need to work together to increase resources such as after-school programs for youth violence prevention. While these crimes endanger residents, they also subject families to higher incidences of incarceration. In New York, 146 of every 100,000 youth are detained in juvenile detention centers.

However, Weinberg noted that these changes would take longer because they require readjusting the city budget to add a new expense line, thus requiring conversations between the Department of Transportation, New York City Housing Authority, community organizations, and Columbia. He was optimistic that Wednesday’s conversation brought these groups together for the first time on this topic in recent memory, but he emphasized that conversations were only the beginning.

“This meeting tonight was the first big step in establishing regular dialogue and coordination among these groups and funding will follow that,” Weinberg said. “But it’s easier to get everyone on the same page than to get through the whole budget process, which would need to happen to see some of these longer-term changes.”

Directly after the incident, NYPD assigned additional police officers and placed floodlights along the outside of the park to increase visibility and promote safety, said Anthony Carrion, a co-chair for CB9’s landmarks and parks committee. Carrion led a meeting early this month to discuss park safety on behalf of CB9.

At a precinct community council meeting on Tuesday, Castillo said that 10 to 12 police officers patrol Morningside Park in addition to the park department’s sergeant and six night park-enforcement officers.

“These measures are going to be in place for the foreseeable future; I don’t see them changing anytime soon,” Castillo said.

Community leaders, Columbia administrators, and residents met to discuss safety in Morningside Park at a community forum on Wednesday. While potential solutions were floated, the DOT had already committed in 2012 to begin replacing the high-pressure sodium lighting with LED lighting at every park, a department spokesperson said in a separate interview. 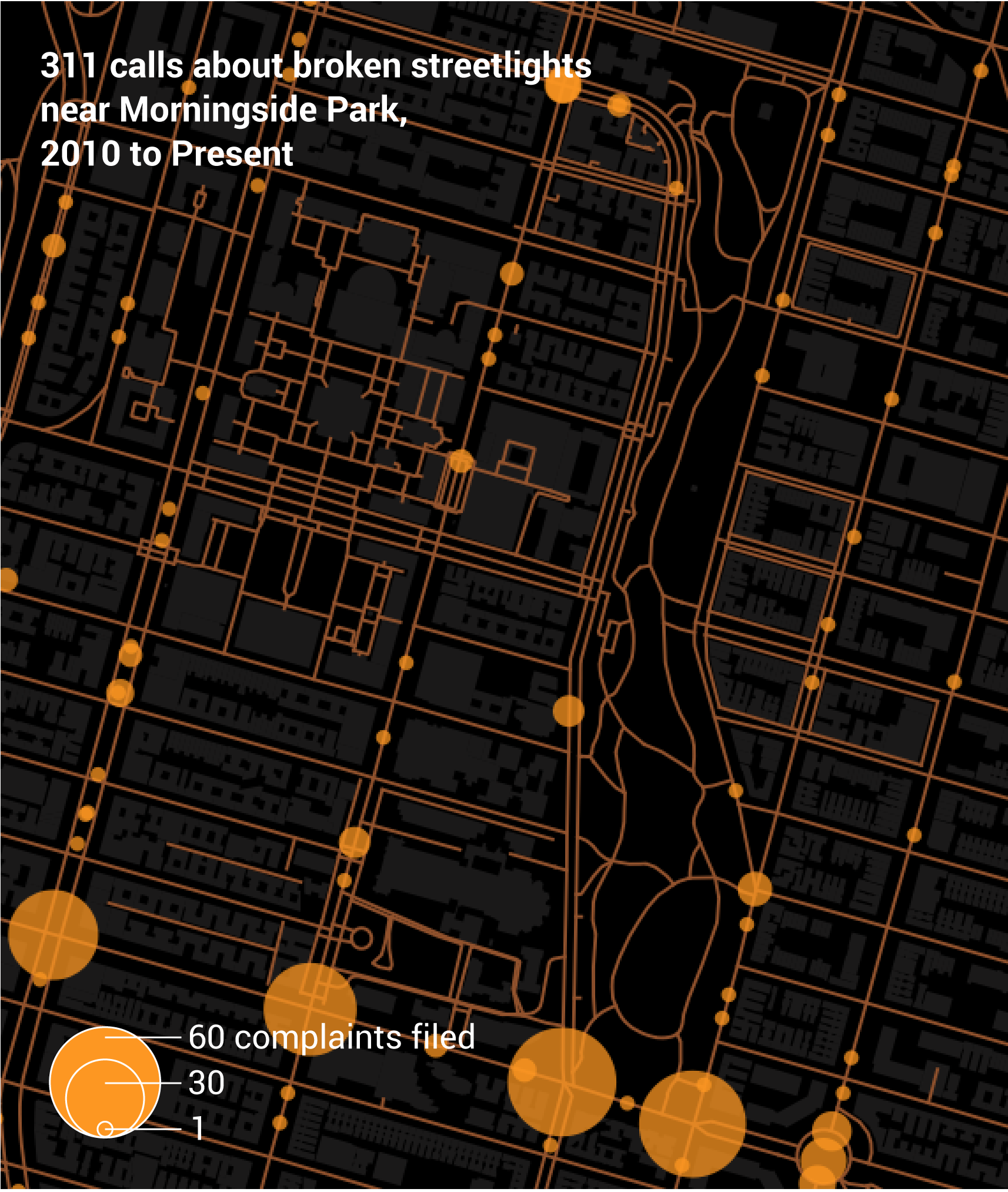 According to data from the DOT, roughly 100 reports of broken lights in the district have been made every year from 2010 to 2019. In 2016, over 150 reports were made, and the number has since decreased steadily to about 60 reports in 2019. The reports, however, are dependent on people sending in feedback on damaged lights.

At the two corners of Morningside Park along 110th Street, a damaged light report was made six times between 2010 to 2016.

Plans are also in place to install six light towers throughout the park, Castillo said.

“We anticipate updating the lighting to LED in Morningside Park this spring, as part of overall park LED lighting enhancements throughout the city,” the DOT spokesperson said. “In Morningside Park, we recently made repairs to existing fixtures and replaced conduit and cables.”

Alessandra Galletti, the vice president of Project for Public Spaces, a New York-based nonprofit for preserving public spaces, said that the LED light installation will be cost-effective and provide more options to both brighten and control the warmth of the lighting.