A space built for the community, the Forum remains inaccessible to local residents

A space built for the community, the Forum remains inaccessible to local residents 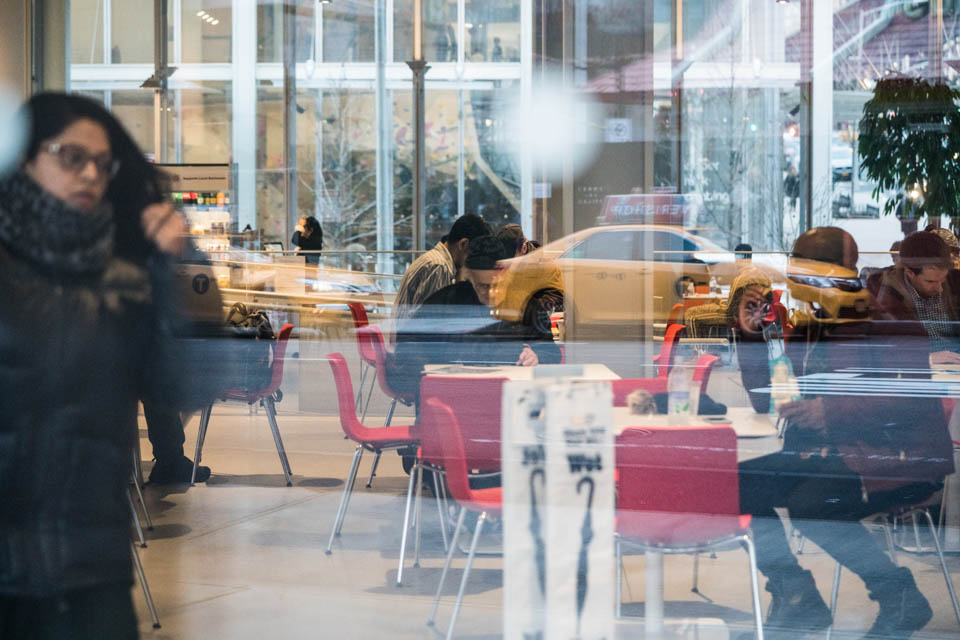 As Aline Estefam, a graduate student in urban planning, approached 125th Street and Broadway, she immediately noticed the contemporary architecture of The Forum at Columbia University. With wide windows and sharp white edges, it stands in stark contrast with the surrounding gradient of brown brick buildings.

As Aline Estefam, a graduate student in urban planning, approached 125th Street and Broadway, she immediately noticed the contemporary architecture of The Forum at Columbia University. With wide windows and sharp white edges, it stands in stark contrast with the surrounding gradient of brown brick buildings.

Estefam, who has been studying community participation and city planning at Columbia, has spent the last five months conducting research on the functions of The Forum to find ways to better situate the building into the West Harlem community. The building’s architectural contrast with neighboring buildings, in addition to its disjointed internal floor plan and indistinct identity, has ultimately led to a disconnect between The Forum and the surrounding community, she found.

Since the beginning of the $6.3 billion, 17-acre Manhattanville expansion into West Harlem, local residents and city officials have pointed to displaced residents, loss of business, and rising rent prices as evidence of the University’s disruption of the community, despite Columbia’s claims that the Manhattanville expansion will bring increased business and economic benefits to the surrounding neighborhood. The University is currently in the process of fulfilling its $150 million commitment to the city under a contract known as the West Harlem Community Benefits Agreement. However, the campus expansion has continued to be a point of contention between residents, local officials, and the University.

Marketed as the “gateway to an urban campus, designed for both academic and civic engagement,” The Forum, which was designed by Renzo Piano, is the third building within the Manhattanville expansion. At the time The Forum was opened, administrators claimed that their aim was to use it as a cornerstone to connect Columbia’s Manhattanville campus, West Harlem residents, and the broader academic community through programming and speaker series.

According to University literature, the Forum was ultimately intended to bolster attempts to create more space for students and professors to research and take advantage of the “cultural, artistic and economic life of adjoining neighborhoods.”

However, in her research, Estefam questions The Forum's accessibility and ability to fulfill the intentions of the CBA fund if it fails to establish itself as space open to University students and community members alike.

Estefam identified the building’s exterior as one of the reasons why it is accessible to non-Columbia affiliates. She said the project did not consider its surroundings, as, the modern and expensive appearance of The Forum stands out among the lack of urban infrastructure and socioeconomic wealth in the area.

“Through the architectural design, it has created a sense of strangeness and not-belongingness, as if the building was designed not for the local population, but to an (intellectual) elite,” Estefam wrote.

After researching The Forum and speaking with community members and organizations, Estefam noted a general confusion about who is allowed to occupy its space.

“They said that there’s a problem of having a Columbia ID,” Estefam said. “Not that you have to use it, but they mentioned that it felt like you had to use it.” 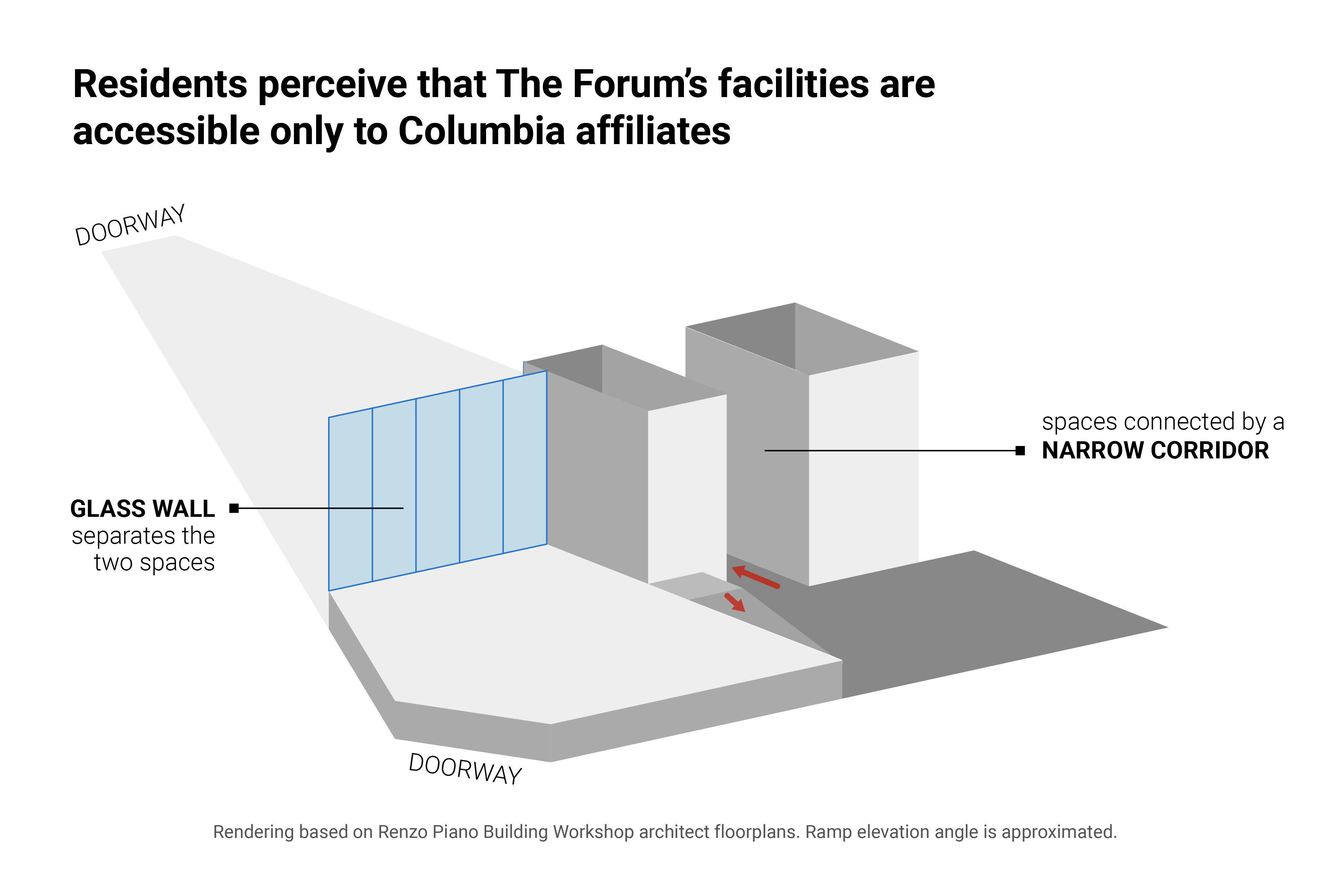 While The Forum is open to University affiliates and nonaffiliates alike, those entering upper levels need swipe access to enter, except during events.

The University has repeatedly emphasized that The Forum has hosted a variety of events such as blood drives, a career expo, and monthly meetings of the Harlem Cultural Collaborative. Several local organizations have also partnered with The Forum to utilize the space for their meetings, such as Pathways to Apprenticeship and the Harlem Local Vendor Program.

But building hours and lack of access to the building have posed obstacles for some of these events. Community Board 9, a local advisory body that represents Morningside Heights and surrounding areas, has held two of its monthly meetings have at The Forum so far. But at its November meeting, the doors to The Forum closed at 8 p.m.—while the meeting was going on.

“We were told the meeting was closed and no one else could come in,” Cohen said at the November meeting. “The Forum does nothing for us if it closes at 8 o’clock; it is an illusion of community output if we really don’t have access to it. The theater ... is a gem that we can look at from afar and attend occasional screenings, but if we want to use it for community use, we can’t.”

Further, residents, who often attend community meetings and events hosted in the Forum, noted that it is difficult to know the purpose of the building. Pointing to the addition of security guards in the middle of the building near the elevators, they said that the building appeared to be exclusive to Columbia affiliates.

“I didn’t know if it was open to the public, so I was kind of surprised we could come in and have certain kinds of meetings,” Kelsey said.

A University spokesperson said it is unclear how the Columbia Public Safety desk discourages pedestrians because it is set away from the pathway and officers often help direct visitors from the entryway.

They also added that the space is often used by Columbia groups and departments to host meetings and highlighted that it offers amenities to the community, such as study spaces with access to free Wi-Fi and a café. The space is open for 12 hours every day.

According to Estefan’s research, the internal design does not promote a sense of openness to the public. She pointed to a glass wall that separates one half of the building from the other, and a security guard desk that sits beside a row of gates that lead to the upper levels, as barriers to entry for community members. From outside, these structures can lead community members to perceive the space as segmented and exclusive.

The University responded that the glass division allows for multiple events to be held simultaneously, and leave space for community members to work.

[Related: Only 8 percent of Manhattanville construction workforce hours go to local residents. One program aims to change that.]

Estefam’s proposal pointed to a need to develop a clear identity for the building—one similar to the arts-specific Lenfest Center for the Arts or the Jerome L. Greene Science Center—which currently holds features that seem to lack a clear purpose to the community, according to her research. She proposes that the building be used for the economic development of the community and that it look more inviting so that local organizations focused on job creation and educational development feel more comfortable using the space.

Her proposal offers additional methods for outreach to the community through events such as children’s career day and a business expo aimed at minorities and women.

Ultimately, Estefam encouraged the University to listen to the needs of the community in order to make The Forum into a proper meeting place for Columbia students and West Harlem residents.

“I think that students, in general, should be more engaged with the community, especially West Harlem, because we are here and Columbia is growing into the neighborhood,” Estefam said. “It’s like a social responsibility.”