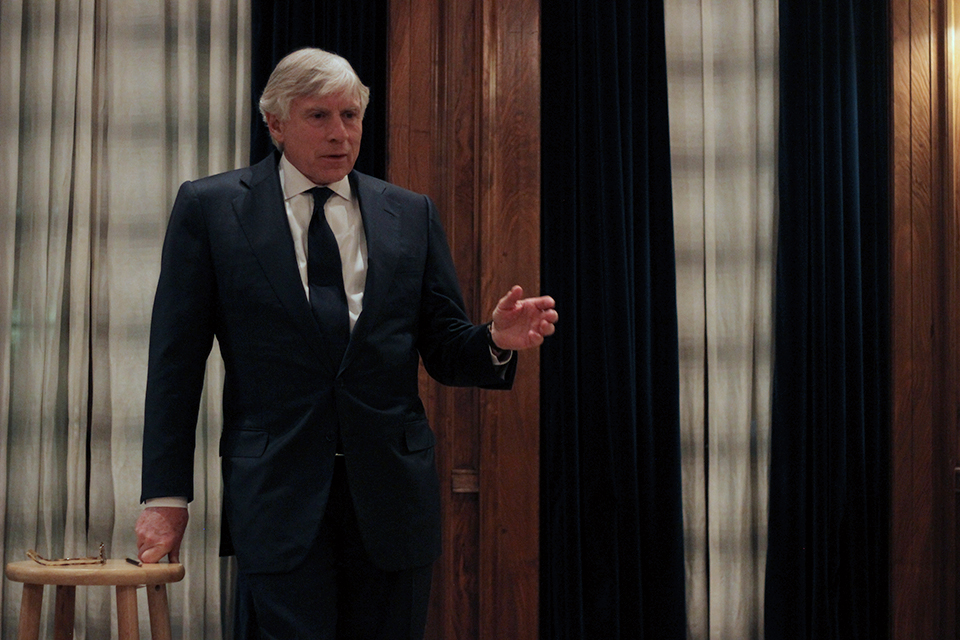 “I would’ve voted for impeachment,” Bollinger said. “I believe the best interpretation of the Constitution is that abuse of power is an impeachable offense.”

University President Lee Bollinger addressed the issue of divestment, the lack of financial aid for international and General Studies students, and his reflections on President Trump’s impeachment trial during his semesterly Fireside Chat on Thursday.

Following the University’s announcement on the creation of a new school dedicated to climate change last week, Bollinger emphasized that Columbia will be moving in the direction towards sustainability and that the University will reflect on its own internal position on its involvement with the issue.

“We’re moving ahead on the school of climate change and that’s a big idea and a big venture and although it hasn’t formally been approved yet; but we’re moving in that direction, so the University has to really think of its own internal position on everything having to do with climate change and reusable energy, and we’re open for ideas,” Bollinger said.

Also during the chat, several students pressed Bollinger about his perspective on the University endowment’s investment. Bollinger responded in regard to the fossil fuel divestment and the boycott, divestment, and sanctions movement, noting that the divestment process is complicated and that he wants to give faculty, trustees, and students in the divestment committee space to think through these issues carefully.

“I think the next big question is the fossil fuel discussion, and I’m sympathetic to the argument that we’ve arrived at a point in the sort of attention that’s needed for climate change and the lack of attention that’s happening, that making symbolic statements is important to consider,” Bollinger said.

In response to student protests around divestment, Bollinger has repeatedly urged students and community members to contact the Advisory Committee on Socially Responsible Investing, a group tasked with advising the Board of Trustees on making ethical investments.

In an email this past week regarding the University’s climate initiative, Bollinger urged the Columbia community to “to take advantage of this efficient and highly effective group” in fossil fuel divestment, citing the group’s role in Columbia’s 2017 announcement to divest from companies deriving more than 35 percent of their revenue from thermal coal production.

However, student groups have repeatedly asked for greater University response in regards to climate justice, with several groups leading protests or raising awareness through theater. Most recently, Sunrise Columbia released a video campaign titled “#NobodyWins” in collaboration with 17 other universities, calling for fossil fuel divestment.

Outside of climate issues, students have raised conversations over a number of initiatives for divestment in the past semester. In November of last year, the Columbia College Student Council voted in favor of a referendum to gauge the student body’s opinion of whether or not to divest “from companies that profit from or engage in the State of Israel’s acts towards Palestinians that, according to CUAD, fall under the United Nations International Convention on the Suppression and Punishment of the Crime of Apartheid acts against Palestinians,” or the BDS movement.

Following the vote, the University also released a statement noting that divestment is decided by ACSRI, not the referendum. In response to questions about BDS at the fireside chat, Bollinger repeated that he would not vote in favor of divestment and cited the lack of consensus on the campus surrounding the topic in question.

One student noted that he finds the inner workings of ACSRI confusing and asked what the University can do to increase student awareness and understanding of the investments.

Bollinger replied that the committee is “receptive.”

“You need a committee that is prepared to test this through a variety of means, not just by having to vote, but by going out and having discussions and interacting with people,” he said.

When asked about what the University would do if there is a majority vote for divestment, Bollinger said, “A majority is not the test that we want to use. The test is ‘Is there a broad consensus,’ and on that, it can’t be just the majority vote.”

“We’re all really focused on this. It is the case that Columbia has struggled with our endowment. It’s a fact of life that our endowment is not in the same ballpark as the other top three or four universities with which we compete,” Bollinger said.

Dean Marlyn Delva brought up the option for international students to apply for employment authorization through Curricular Practical Training, an initiative that went into effect last summer. She announced that it will also be in effect during the fall semester.

On a national level, in the wake of news that the Senate voted to acquit Trump, Bollinger received questions on his thoughts about the impeachment trial.

“I would’ve voted for impeachment,” Bollinger said. “I believe the best interpretation of the Constitution is that abuse of power is an impeachable offense.”