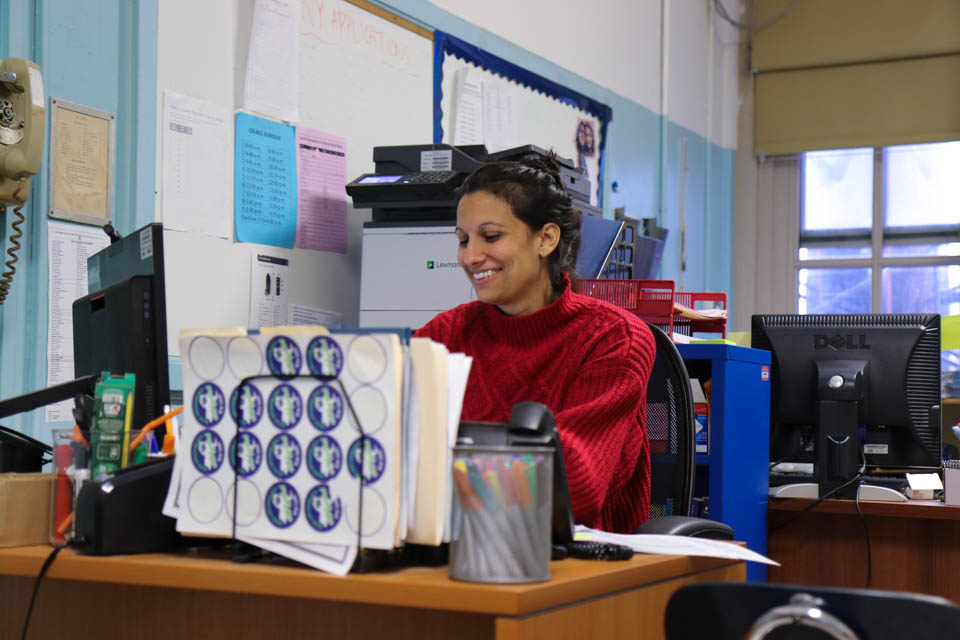 For every student from the eligible Thompson-Muñoz zip codes who attended reputable high schools, there are far more for whom the scholars program was never an option.

Bearing the names of two Harlem-raised Columbia College alumni, the Thompson-Muñoz Scholars program embodies Columbia’s commitment to invest in first-generation and low-income students from local communities. Between 2016 to 2019, only 5 percent of the program’s cohort was accepted into the Columbia College and the School of Engineering and Applied Science from open-admission public schools, according to public data.

Despite dozens of informational visits by the University to under-resourced public schools, Columbia Secondary School, Stuyvesant High School, and the Bronx High School of Science were the only schools to send students to the program all three years, the data also reveals. While thousands battle for only 30 new spots for CSS high school, Bronx Science and Stuyvesant have come under fire for their selectivity which has yielded a 4 and 9 percent black and Latinx population, respectively. On average, 83 percent of Harlem and the Bronx are black and Latinx.

Columbia first named the honors designation after alumni Carlos Muñoz, CC ’57, and Albert Thompson, CC ’54, in 2014, though it has existed without an official title since 2010. The program—which is slated to last until 2033—was started as part of the Community Benefits Agreement, a $150 million commitment signed by Columbia that aims to provide support to the local West Harlem community amid the University’s 17-acre Manhattanville campus expansion. The honors designation does not actively recruit for its annual cohorts, but the CBA broadly promises that Columbia will “undertake a targeted recruitment effort for qualified students from the local community.”

According to the program’s website, recipients are invited to an opening reception and introduced to local leaders and distinguished alumni. Additionally, like all admitted applicants to Columbia College and SEAS, recipients qualify for need-based financial aid, meaning a scholar does not receive any more financial support than any other admitted student.

The 48 Thompson-Muñoz scholars at Columbia this academic year receive over $2.6 million in need-based financial aid. The University’s outreach under the CBA also extends to local programming beyond just college-aged outreach.

Most of the scholars in Columbia’s program, however, were accepted from schools with long reputations of exclusivity on the basis of both socioeconomic status and race in a city with some of the most segregated schools in the nation. While all applicants must reside within the 17 designated zip codes across Harlem, Washington Heights, and the South Bronx, they are not obligated to attend the mostly under-resourced local public schools targeted by the program’s outreach.

Spectator’s analysis of public high school accessibility accounts for specialized, screened (including audition), and open admission schools. Specialized schools require a top-ranking score on the Specialized High Schools Admissions Test, and screened schools require certain criteria—varying from grades, test scores, disabilities, and attendance—to gain admissions. Both of these admissions methods have been criticized for discriminating against accepting black and Latinx students, whose middle schools are too under-resourced to fare well in admissions. Compared to the average New Yorker, Bronx students are 69 percent more likely to attend a non-screened open admissions school.

For every student from the eligible Thompson-Muñoz zip codes who attended reputable high schools, there are far more for whom the scholars program was never an option.

While the intentional local outreach that Columbia outlines as part of the CBA may encourage students in the area to consider the University as a viable option for college, interviews with local high school guidance counselors demonstrate that even targeted recruitment cannot address all of the barriers that prevent high-achieving local students from believing in their importance and belonging at an Ivy League university.

For guidance counselors at open-admission high schools, a consensus was clear: The outreach done in light of the commitment to the neighborhood was not enough to break students’ perception of the University as being an inaccessible space.

Joslie Byrd is the guidance counselor at Mott Hall High School, an open, public high school located at 135th Street and St. Nicholas Avenue. Despite the low number of students that continue on to four-year colleges, Byrd contacted the admissions staff to arrange a campus visit in 2017. Since then, Mott Hall no longer visits Columbia.

“I even felt like we were not good enough, just even as a college tour. Even the person giving the tour was just like [dismissive]. I was just like ‘No, I am not taking my students through this experience again. Ever,’” Byrd said.

David Rivas, another counselor at Mott Hall, agreed with Byrd, saying that the effects of the visit were “disgusting” in the way that it reinforced students’ preconceived notions about Columbia not being a real option for them.

If the high school students felt distant prior to the visit, they felt ostracized after.

“[The experience] was so strong for them, that they actually share[d] it … to the point that the [next class] didn’t want to go. It felt like we don’t belong here, and that’s what we get every day, we don’t belong in the Ivy League, at Columbia,” Rivas said.

The recruitment of these students would represent a drastic difference from the socioeconomic makeup of Columbia students. In 2016, 43.3 percent of residents 18 years or younger in the Thompson-Muñoz-eligible neighborhoods were living below the poverty line. In comparison, the median family income for a Columbia student in 2017 was $150,900, with 62 percent of students coming from the top 20 percent.

The honor designation allowed Yanette Rosario, CC ’18, TC ’22, the invaluable experience of meeting Thompson and Muñoz, two success stories for people of color from Harlem and the Bronx. Her journey to Columbia led her to a two-hour daily commute to Preston High School, the prestigious Catholic school with an extensive college preparation program—Harvard, Yale, and Columbia are among the list of college acceptances.

“It took me about two hours to get there every day, but I won a scholarship, a Catholic school scholarship to attend, and it made it possible for me to go [to Columbia],” Rosario said. “I was privileged to go there, it has a lot of resources, and it managed to get me through the door in order to attend Columbia.”

Students at CSS apply to Columbia and are admitted on an annual basis, empowering high-achieving and engaged students to see the University as a possibility. Rather than asking if their students have the opportunity to attend Columbia, guidance counselors focus more on helping students weigh whether Columbia is “a right fit,” guidance counselor Kiri Patel said.

Much like the honors designation program, CSS was written into the CBA as a partnership school with the University. CSS is made up of mostly local students but bases its admission off of factors like test scores, grades, and attendance.

For those who are admitted, being empowered to apply to Columbia is a real possibility. But, put simply, the high school is extremely selective, counselor Andi Velasquez said.

In middle school, New York students rank 12 of their preferred public high schools. Velasquez doesn’t know where CSS fell on the preferences of applicants, but she knew that “it’s about 4,300 applicants and about 30 spots.”

A. Philip Randolph Campus High School valedictorian Lisyeira Jimenez had envisioned herself attending the University for much of high school, and Columbia’s informational presentation confirmed everything that she had already researched after years of excelling academically to accomplish her dream. University representatives gave an informational presentation to the National Honor Society students at her West Harlem high school. The school uses a screen to record and accommodate students who may have disabilities, but APR opened its doors to all students.

It would have been impossible for Jimenez to predict if she would be accepted, but she was cautiously optimistic that she stood enough of a chance to apply.

“Once you’re a senior, you have the schools that you want to go to, so by the time Columbia did the information session people already knew where they wanted to go. I was encouraged to apply because I already wanted to apply,” Jimenez said. But she was ultimately denied entry to the University.

Although admissions are highly secretive, counselors at open admissions public high schools point to one significant barrier in their students’ access to elite institutions like Columbia. Even if students like Jimenez have high GPAs, many are still missing the SAT scores needed to be a nationally-competitive Columbia applicant, APR counselor Ana Cruz said. Though they are not the only factor in college admissions, SAT scores have come under fire for misrepresenting the college readiness of low-income students, many of whom are unable to afford the expensive test prep or private tutors that are proven to help bump up scores.

Only seven in a school boasting 300 seniors, and 1500 students total, received an SAT score above 1300, according to Cruz; four students scored above a 1370. For Columbia College and SEAS classes of 2023, the middle 50 percent of admitted students scored between 1480 and 1560.

APR is the main partner school at the University’s Double Discovery Center—a program meant to increase overall college readiness among first-generation, low-income youth from Harlem and Washington Heights. In a 2018 interview with Spectator, Dean of Undergraduate Admissions Jessica Marinaccio explained that community outreach programs like the Double Discovery Center and the Tutoring and Learning Center are meant to enrich local high school students. This is distinct from recruitment efforts, where Columbia focuses its efforts toward students who are likely to be competitive.

Victor Edwards is the strategic planning chair and second vice chair of Community Board 9, a local advisory board that represents Morningside Heights and surrounding areas. Edwards said that the heavy recruitment from selective high schools sends a message that “Columbia and other Ivy League schools are often looked at as unattainable to people in that community.”

Health Opportunities High School, a high school in the South Bronx, admits students with a wide range of academic performance. Most of the students come from the South Bronx neighborhoods surrounding the school, counselor Olivia Nieves said.

She said other colleges like SUNY Brockport and Princeton University recently visited and gave informational presentations. Nieves said that these presentations are beneficial in “debunking some of the myths” about the costs and inaccessibility of a college education.

After the Princeton presentation, however, she reported that students’ sentiments toward prestigious colleges had not changed much.

“We don’t have the grades or the money to go to Princeton. It was really like, ‘What’s the point in that?’” Nieves said in observation of students’ reaction to the informational session. “A lot of them didn’t know what … Princeton was, and some of them who did know didn’t think they had a chance to even get in,” Nieves said.

She said that a visit from Columbia would likely evoke a similar reaction. “A lot of our students have the fear of not being able to compete once they get [to Columbia] with the other students who have well-rounded educational backgrounds and the money to pay to be there.”

Columbia’s efforts could not reverse most APR students’ belief that they are better off spending their time applying to less selective colleges.

“If [students] didn’t know [they wanted to go to Columbia], I don’t think it would have pushed them,” Jimenez concluded in reflection of the University’s efforts.