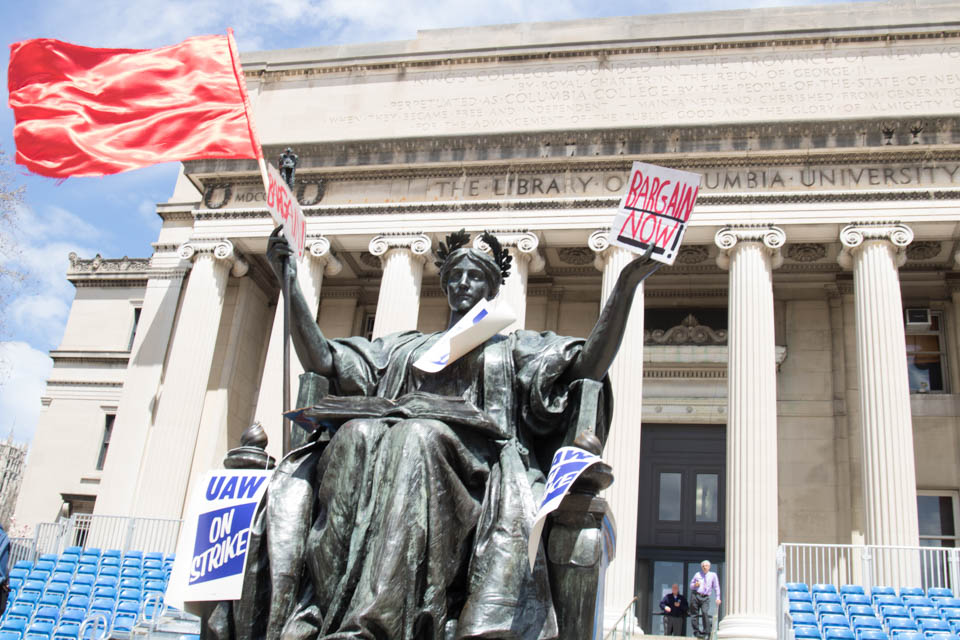 As the University maintains its position on a number of issues, the Graduate Students Union approaches the end of its no-strike-contract on April 6. If two-thirds of the eligible voters vote in favor, the union has confirmed it will strike.

Members of the Graduate Workers of Columbia-United Auto Workers have voted 1,833 to 77 in favor of authorizing a strike in response to what union members have labeled as the University’s unsatisfactory approach to negotiating key bargaining points.

After years of contentious back and forth, the Columbia administration officially recognized GWC-UAW in 2018 and ensured the union’s ability to negotiate. As part of their agreement, both parties agreed on a bargaining framework that delayed a potential strike until after April 6. Earlier this March, weeks ahead of the deadline, the union announced that it would hold a strike authorization vote to push for more progress on these concerns. The potential strike and authorization vote have not yet been discussed at the bargaining table.

Specifically, while Columbia and the union have come to tentative agreements on “Holidays, Workload, and Intellectual Property,” a number of issues were raised on the University’s standstill positions in a statement released by the Union on March 2.

In particular, the union has demanded a reevaluation of the University’s positions on alleged discrimination grievance procedures, the reservation of bargaining rights to only doctoral, salaried workers, the refusal to provide on-demand toxic exposure test for student workers, and the position that the University will only negotiate “non-academic” matters.

According to multiple union members, the drawn-out process of negotiation, combined with a slow response from Columbia on key issues, has left members ready to threaten a strike rather than bargain on issues that the University refused to negotiate. Most recently, union members pointed to Columbia’s decision to deny a third-party arbitrator in grievance decisions for legal concerns, one of the main focuses of GWC-UAW’s bargaining efforts.

“If they can’t pull it together, then we aren’t going to waste any more time,” member of the union and bargaining committee Dominic Walker, TC ’15, GSAS, said.

In light of new restrictions on large gatherings due to the coronavirus outbreak, GWC-UAW and University administrators discussed options for continued negotiations during their bargaining session this past Monday. Bargaining will not stop, however, despite these regulations.

In response to the strike authorization vote earlier this month, Columbia maintained that it is bargaining cooperatively.

"Both sides are working hard at the bargaining table to achieve the goals of the Framework Agreement. Our hope is to reach fair and thoughtful collective bargaining agreements with the GWC-UAW and CPW-UAW during the coming five weeks,” a University spokesperson said in a comment. The University has also repeatedly highlighted the fact that the bargaining framework—pre-agreed upon by GWC-UAW and the University before negotiations—establishes Columbia’s right to maintain sole jurisdiction over academic issues in light of the union’s complaints.

According to former National Labor Relations Board chairman William B. Gould IV, a scholar of labor and discrimination law, the use of a strike authorization vote is a commonplace strategy used by unions to “bring bargaining down to the crunch,” especially when negotiations feel prolonged.

According to Walker, the University has failed to offer alternatives to economic proposals—including improved healthcare and housing stipends. As such, Gould stated that the vote should put pressure on the University to reveal evidence for the looming threat that the increase of expenses for graduate students will result in hikes in the already high and rising tuition costs.

All Columbia graduate and undergraduate students who signed a GWC-UAW authorization card and who are currently, previously, and—in some cases—those who expect to be employed by the University, are eligible to vote starting Monday at various times across all Columbia campuses.

Griffin Jones contributed reporting. He can be contacted at griffin.jones@columbiaspectator.com.