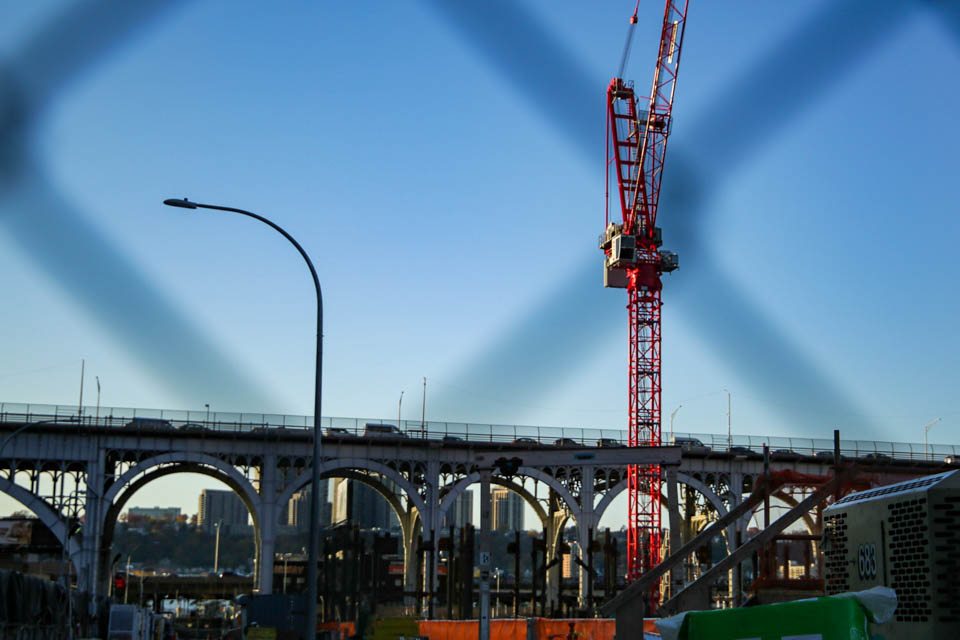 As New York City faces 9,562 deaths and 134,874 confirmed cases of COVID-19 as of April 21, workers have been asked to return to work with enhanced health and safety measures.

During the peak of COVID-19 cases in New York City, Columbia construction workers resumed operations at the Manhattanville campus after an updated state order outlined exceptions to social distancing guidelines on Sunday. However, workers and experts raised concerns over construction workers’ increased risks of contracting COVID-19 and the conditions that place workers at greater risk of injury and make social distancing impossible.

The University mandated that non-essential workers go remote on March 16. It made the same announcement for construction workers 11 days later but only after the state mandated the end of construction. Prior to the state order, workers expressed concerns over having to sacrifice their safety for fear of losing pay.

Now, as New York City faces 9,562 deaths and 134,874 confirmed cases of COVID-19 as of April 21, workers have been asked to return to work with enhanced health and safety measures. Sunday’s state order deemed construction supporting private and public schools essential and included the University’s construction sites on the New York City Department of Buildings map of Essential Active Construction Sites.

According to a University release, all workers will complete a temperature scan and self-assessment before entering the job site for the construction of the new Business School buildings on the Manhattanville campus. Schedules are staggered with different start and end times for subcontractors to reduce the number of people in contact with one another.

Turner Construction, which is managing the project, limited the number of workers on the hoist and designated separate stairs for moving up and down to comply with social distancing guidelines. The company also committed to providing all workers with protective equipment like masks and face coverings while working on site.

In March, the University provided employees with 10 additional paid sick days on top of New York City’s 40 hours of leave. However, independent firms like Turner Construction are not required to provide 10 sick days.

[Related: Paid leave can stop the pandemic. Columbia’s policy lets it contract workers who are not guaranteed any.]

Harvard School of Public Health Professor Glorian Sorensen said workers may also feel pressured to go to work due to a fear of losing their jobs if they are not provided sufficient paid sick leave.

“This pandemic has raised the issue of sick leave to the public consciousness more than in the past,” Sorenson said.

If they are not provided sufficient paid leave, workers have to make a decision with only preliminary data about the time needed to recover and the Centers for Disease Control and Prevention’s guideline to return to work 72 hours after showing no symptoms.

Further, the protocols in place do not mitigate all risks involved for workers on site, experts said.

Construction workers face additional risks due to the revolving nature of their work since workers specialize in specific jobs and move from one project to another, said Jack Dennerlein, a professor at the Harvard School of Public Health.

“There’s a tension between some of the best practices around COVID-19 and doing a job safely,” he said. “The industry really relies on the buddy system as an extra set of eyes, and the social distancing requirements might put them at risk not for the virus but for an injury or accident to occur.”

Sorensen added that social distancing practices are difficult for those working in confined spaces like elevators.

According to Dennerlein and Sorensen, construction workers face higher risks of respiratory issues due to heightened exposure to particulate matter, dust, and chemicals and have the highest rates of current smoking of any occupational group.

The comorbidities from their chronic health diseases put them at higher risk of contracting COVID-19, Sorensen said.

“I can’t say that it’s safe [to resume working], but if they are going back, then [the priority] is making sure these situations are set up to maximize safety, such as regular and consistent breaks, social distancing norms and wearing masks, and having sick leave policies in place,” Sorensen said.

With Morningside Heights featuring the largest income disparity in New York City, according to a 2013 Spectator analysis, many construction workers and low-income essential workers have concerns about commuting to work. According to the New York Times, the Metropolitan Transportation Authority reported over 6,000 transit workers were sick or in quarantine and 41 deaths—leaving commuting construction workers in a precarious situation. The MTA also announced significant service cuts, which has led to potential overcrowding in subway cars.

Dustin Duncan, a Columbia Mailman School of Public Health associate professor of epidemiology, said construction workers would likely have to rely on public transit, putting them at a greater risk of contracting COVID-19.

“Anyone who’s taking the subway could be potentially at increased risk for COVID, interacting with someone who has COVID who may or may not know it,” Duncan said. “In light of the fact that construction workers have poor respiratory health, I imagine them to be a key population of COVID diagnosis compared to people who are perhaps more healthy.”