For some, the canceled Commencement would have been the first in the history of their family

For some, the canceled Commencement would have been the first in the history of their family 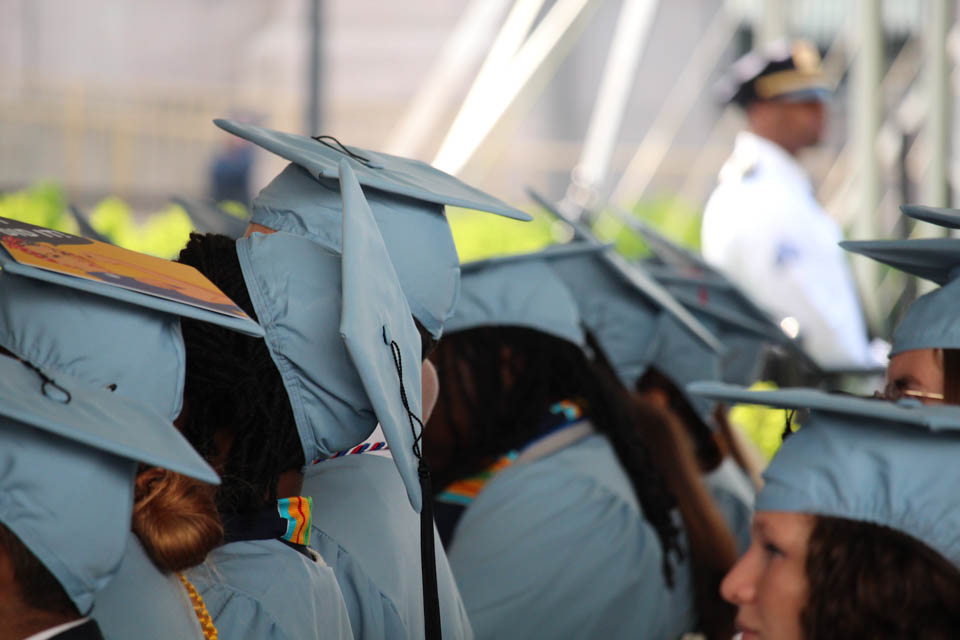 For first-generation, low-income seniors, Commencement is more than getting a degree, it’s a celebration of what they’ve overcome.

Leon’s cap and gown now sit in the corner of her family’s Oklahoma home. She is unsure if they will ever be used.

For Leon, Commencement has a special meaning attached to it. The child of undocumented immigrants, Leon is the first in her low-income family to go to college.

“I think that the conversations around [Commencement] have been kind of frustrating for me because you just see seniors being sad because they don’t have Commencement, but it’s like, you know, your great-grandfather went to Columbia. It’s very different for someone who’s like ... nobody in my family had even gone to like community college or anything like that,” she said.

Leon is one of the many first-generation, low-income students who attend Columbia. For FLI and nontraditional students, Commencement is more than the conferral of a degree; it represents a celebration of family sacrifice and overcoming immense challenges. While the School of General Studies and Columbia College have committed to in-person class days when conditions permit, the University has not confirmed that it will postpone Commencement, though Bollinger said he hopes one will happen. But while students have petitioned for a delayed Commencement ceremony, low-income students have cited challenges that would make attending a delayed in-person graduation difficult for those who find a special meaning in it.

Since her first year at Columbia, Patricia Granda-Malaver, CC ’20, has had the date of Commencement in the back of her mind. To her, it would have been a time to acknowledge all that her parents had sacrificed. In Peru, her father was a lawyer and her mother was a social worker, but upon immigration to the United States, they took low-paying jobs to pay for their children’s education.

“It’s very symbolic for a lot of first-generation low-income students to have their parents there, especially for a lot of us [who] have parents who are immigrants and quite literally gave up everything to come to this country,” Granda-Malaver said. “So all of a sudden to have all of that taken away, I feel like I haven't really coped with it yet.”

Raul de la Espriella, GS ’20, has been dreaming of Commencement for 20 years. A first-generation student, de la Espriella didn’t graduate high school on time and never walked for his community college graduation, which was devastating for his mother. He wanted to cross the stage not just for himself, but for her too.

“[When] I got accepted my first thought, no joke, was graduation. The graduation ceremony and the fact that my mom would be there, and I just keep on thinking ‘I gotta do this’ so that my mom can see me graduate. So [for] four years ... the diploma and the job I get after hasn’t been my number one focus, it’s been having my mom watch me graduate,” he said.

For others, Commencement was not just for themselves and their families, but for their communities. For most of his life, Samer Hassan, GS ’20, was undocumented and unable to attend college. Commencement was going to be a celebration of overcoming 11-years worth of obstacles as a result of his documentation status, FLI background, and sexual orientation. As an activist fighting for legislation that makes higher education more accessible with the advocacy organization Young Invincibles, he wanted Commencement to be a symbol to the undocumented community, which is often unable to pursue higher education because of lack of access to federal financial aid, being forced to pay out-of-state tuition in some states, and anxiety over their documentation status.

“Here I am, told all my life that I couldn’t even go to college and now about to graduate [from] an Ivy League? That’s a big thing—that’s a huge thing for my community, for my people. Neither of my parents even finished high school, even finished their freshman year of high school. I really wanted that day to be for my people,” Hassan said.

Granda-Malaver also saw Commencement as an opportunity to send a message, particularly to her little cousins who were supposed to attend. Granda-Malaver wanted to show them that they belong in elite spaces like Columbia.

“I would have loved them to be there and see not just me but also just other women of color, low-income students, and know that they can also go to an institution as amazing as this, and they can have all these dreams and still be small brown little girls and still have that confidence,” Granda-Malaver said.

However, while holding a delayed in-person Commencement would offer students a chance to celebrate the end of their time at Columbia, low-income students cited unique difficulties that could prevent them from taking advantage of such an opportunity.

For students whose parents work in low-paying jobs, like Leon’s parents, getting time off often requires asking months in advance. Parents would have to request time off in the summer in order to attend a graduation ceremony in the fall, but the uncertainty of the COVID-19 pandemic has prevented administrators from being able to plan so far ahead.

“Asking for future dates I feel like doesn’t take into account the first-gen low-income narrative of ... having to ask for extra days off work. It’s just like a super privileged thing to be able to assume that everyone is going to be able to make a new date or that everyone gets Labor Day weekend off,” Leon said.

The cost of travel is also prohibitive for those who live far from Columbia. New York City, in particular, is especially expensive to visit: three of the five most expensive airports in the United States are in the New York City area. For Granda-Malaver, preparations have to be made months in advance in order to keep the trip affordable. If there is going to be an in-person graduation in the fall, she said, her family would need to know soon in order to afford airfare.

“We couldn’t afford the tickets if we waited last minute, and we’re only coming from Georgia. It’s not like we’re coming from super far away, and still, that’s a toll on our family to buy those tickets,” Granda-Malaver said.

The General Studies Student Council has allocated $29,000 to a travel fund dedicated to helping the GS Class of 2020 come back to campus for a postponed Class Day. However, the General Studies student body has a large share of low-income students, with approximately 44 percent of students receiving Pell Grants, which are allocated to students with financial need, leading to concern that the current size of the travel fund is insufficient to support the travel needs of the class of 2020.

Low-income students also said that a fall graduation would take away important opportunities to save money that would be available in the spring. Garrison Grogan, SEAS ’20, had planned to cut costs by having his family stay in his dorm. However, if COVID-19 subsides by the fall and allows the University to return to in-person classes, dorms will be full of students, forcing families to make alternative accommodation arrangements like staying at hotels. New York City is the second most expensive city in the United States for hotel rooms, presenting another steep cost to students hoping to return.

“I know a lot of families basically do Commencement for cheap by ... having people stay in cleared out dorms, and so that won’t be an option for those families anymore,” he said.

“A future Commencement [is] definitely is a topic that is very privileged, and I hope that Columbia considers all of these FLI students whose parents need to ask off who might not be able to make it if there isn’t financial help,” she said.