As businesses reopen and restrictions begin to loosen, residents and experts alike believe that establishing more Open Streets closer to Columbia’s campus would help promote social distancing, as the neighborhood has a higher percentage of walk-to-work commuters compared to New York City at large.

Outside of Costas Ieromonahos’ iconic Tom’s Restaurant in Morningside Heights, all but two of the tables he had set up on the sidewalk for the lunchtime rush stand are empty. A few pedestrians make their way down Broadway in the July heat, ensuring there is a 6-foot bubble of space between them and passersby. Those who venture outside are met with the discordant sound of tires cruising across the pavement.

But just a mile away, children play in the middle of a shaded residential street, dashing through the shower from a fire hydrant. Their parents follow behind with water guns while everyone enjoys conversation over a birthday cake—having bonded over dance parties, pilates, wine tasting, and a brand-new community fridge over the summer.

While this scene looks like something out of a pre-pandemic summer camp, it is taking place on West 120th Street in Harlem. In between barricades on either end of the street, all the participants are wearing masks and staying a safe distance from each other.

“It’s definitely giving us a lot of relief,” resident Angelo Guainacci said as he watched his two young kids play in the hydrant’s spray. 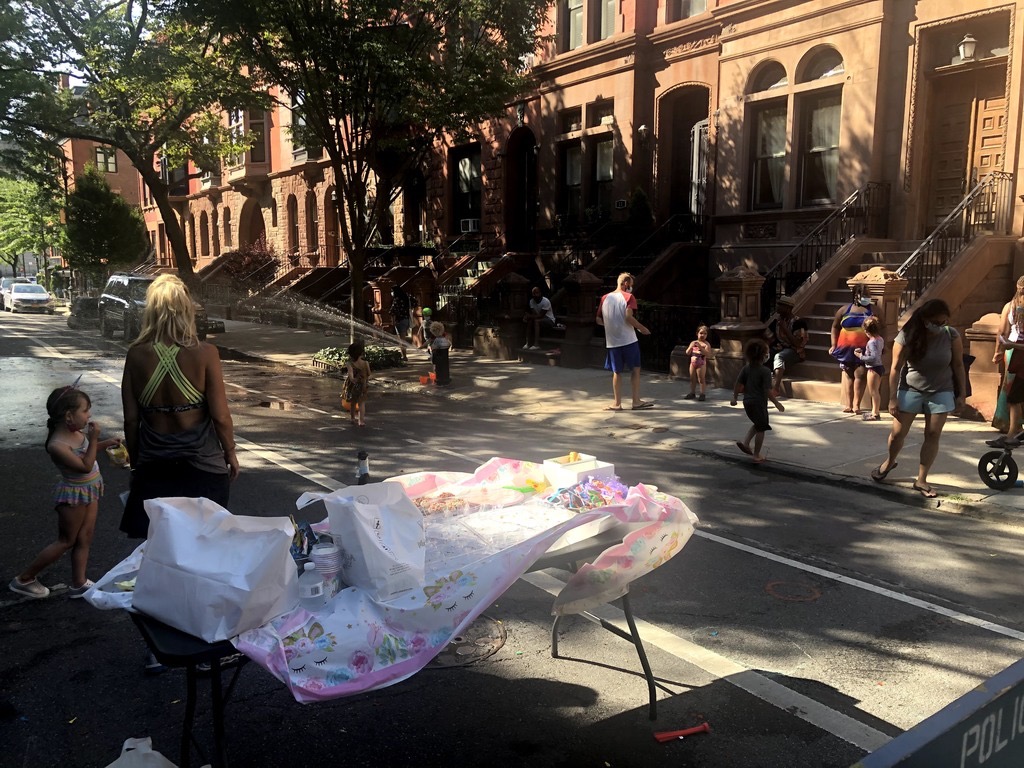 Katherine Nessel
Children play in the middle of a shaded residential street, dashing through the shower from a fire hydrant. Their parents follow behind with water guns while everyone enjoys conversation over a birthday cake—having bonded over dance parties, pilates, wine tasting, and a brand-new community fridge over the summer.

West 120th Street is one of 208 streets that are currently barricaded off as part of New York City’s Open Streets program. The program was introduced by New York Mayor Bill de Blasio in April to facilitate social distancing, which had proven difficult for those in neighborhoods with crowded parks and sidewalks as narrow as 3 feet, such as Harlem. Open Streets, streets closed to most car traffic and opened for pedestrians and bicyclists to use, gave many New Yorkers space to safely get some fresh air and momentarily escape the isolation of quarantine by rediscovering their local communities.

After a less-than-successful trial run, the Open Streets program was officially launched on May 4, initially dedicating 40 miles of streets for pedestrian and bicycle use with additional streets open for restaurant use on weekends. Over the past three months, the New York City Department of Transportation has expanded the program to include a target of 100 miles of Open Streets.

As businesses reopen and restrictions begin to loosen, residents and experts alike believe that establishing more Open Streets closer to Columbia’s campus would help promote social distancing, as the neighborhood has a higher percentage of walk-to-work commuters compared to New York City at large.

“In many ways we are fortunate … because we do have a campus right where individuals are at least able to be outdoors safely. I think there are other places that don’t have the luxury of having the quad, you know, that open space,” Dr. Wafaa el-Sadr, professor of epidemiology and medicine at the Mailman School of Public Health, said. “Having more open spaces would be very useful.”

While the West 120th Open Street has become the site of vibrant community activity, other neighborhoods across the city face challenges with inconsistent management and implementation of the Open Street program as well as insufficient funding. The management and enforcement of an Open Street have been left to resident volunteers who must dedicate their own funds and time in order to meet and maintain safety measures.

Neighborhoods like West Harlem that have higher populations of low-income, Black residents also have larger populations of essential workers who have had to continue working throughout the pandemic. This has left residents with less time to voluntarily enforce Open Streets. For the Open Streets in Harlem, the New York Police Department is in charge of enforcement for all but two streets.

Spectator reporters traveled to each Open Street south of 135th Street in Manhattan twice across four separate days. According to data collected by Spectator, the efficacy of the Open Streets program is correlated to the presence of community organizations. Management of the current Open Streets is split between the NYPD, Business Improvement Districts, and community-led organizations.

On West 117th Street, which is also designated as an Open Street, all of the barricades lay graffitied and dismembered on the ground, with nobody except drivers on the road. Without barricades to redirect automobile traffic away from the Open Street, cars dominate the street while pedestrians stick to the sidewalks. The NYPD is tasked with managing this street, but across four separate visits last week, it did not.

With thousands of Columbia students expected to return to campus in the upcoming month, finding space for community building while observing social distance measures is key. In June, the Morningside Heights Community Coalition wrote an address to University administration asking it to consider the potential impacts of reopening campus on the surrounding community.

“Nobody said nothing about this space only supposed to be for bikes,” resident James Brown said when asked about West 117th Street. “It seems like [the city does not] take social distance at heart.” 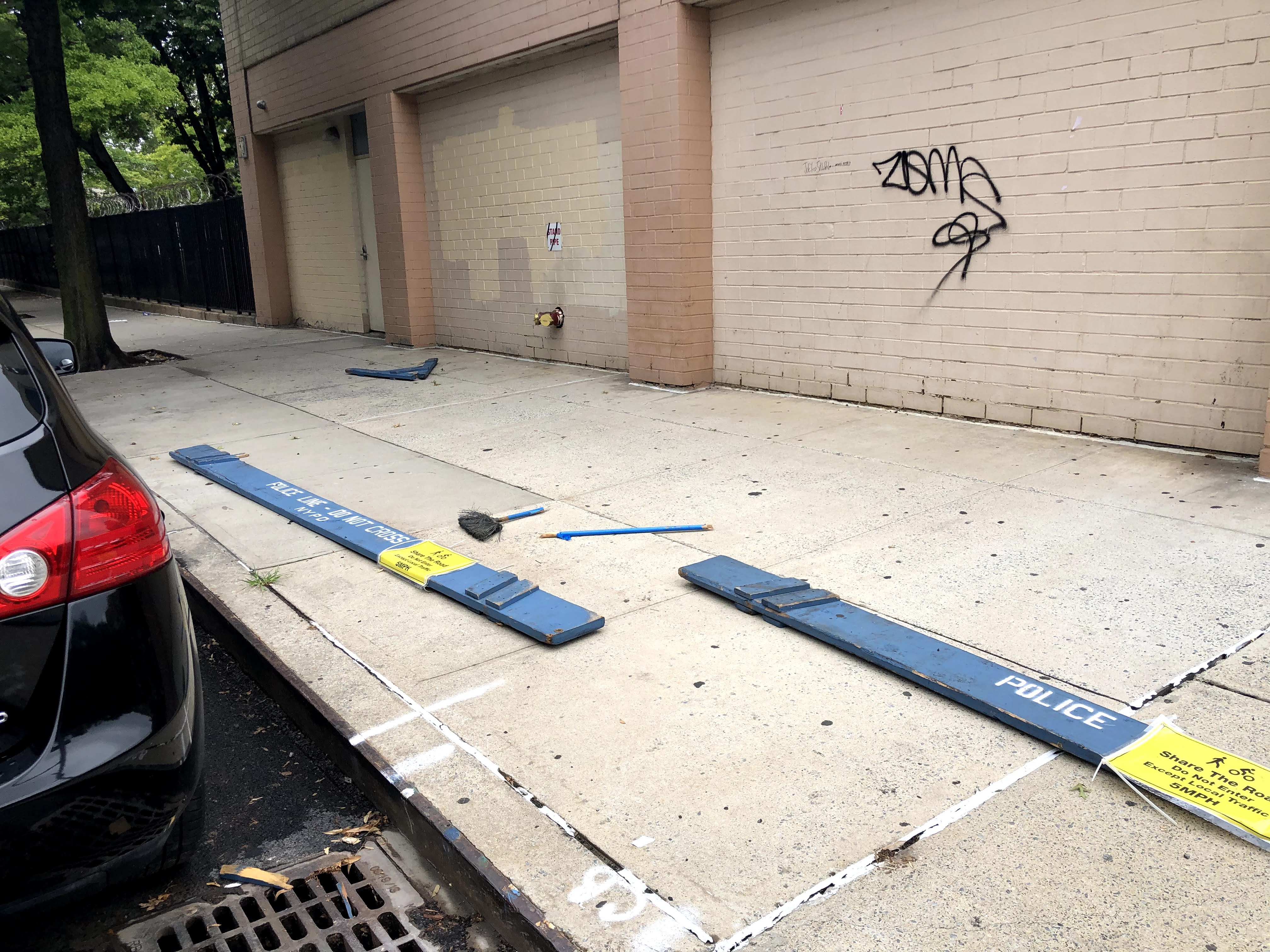 Katherine Nessel
On West 117th Street, which is also designated as an Open Street, all of the barricades lay graffitied and dismembered on the ground, with nobody except drivers on the road.

Further downtown, many businesses and BIDs have jointly taken charge of running and maintaining Open Streets in business districts. Doyers Street, which is managed by the Chinatown BID came back to life with restaurants utilizing the entire width of the street for dining.

“It felt like the soul of this neighborhood had just been vanquished,” Eddy Buckingham, co-owner of Peachy’s, said referring to the peak of the pandemic in the spring. “With Open Streets and Open Restaurants, there’s at least some return to the energy and spirit and culture of the neighborhood.” 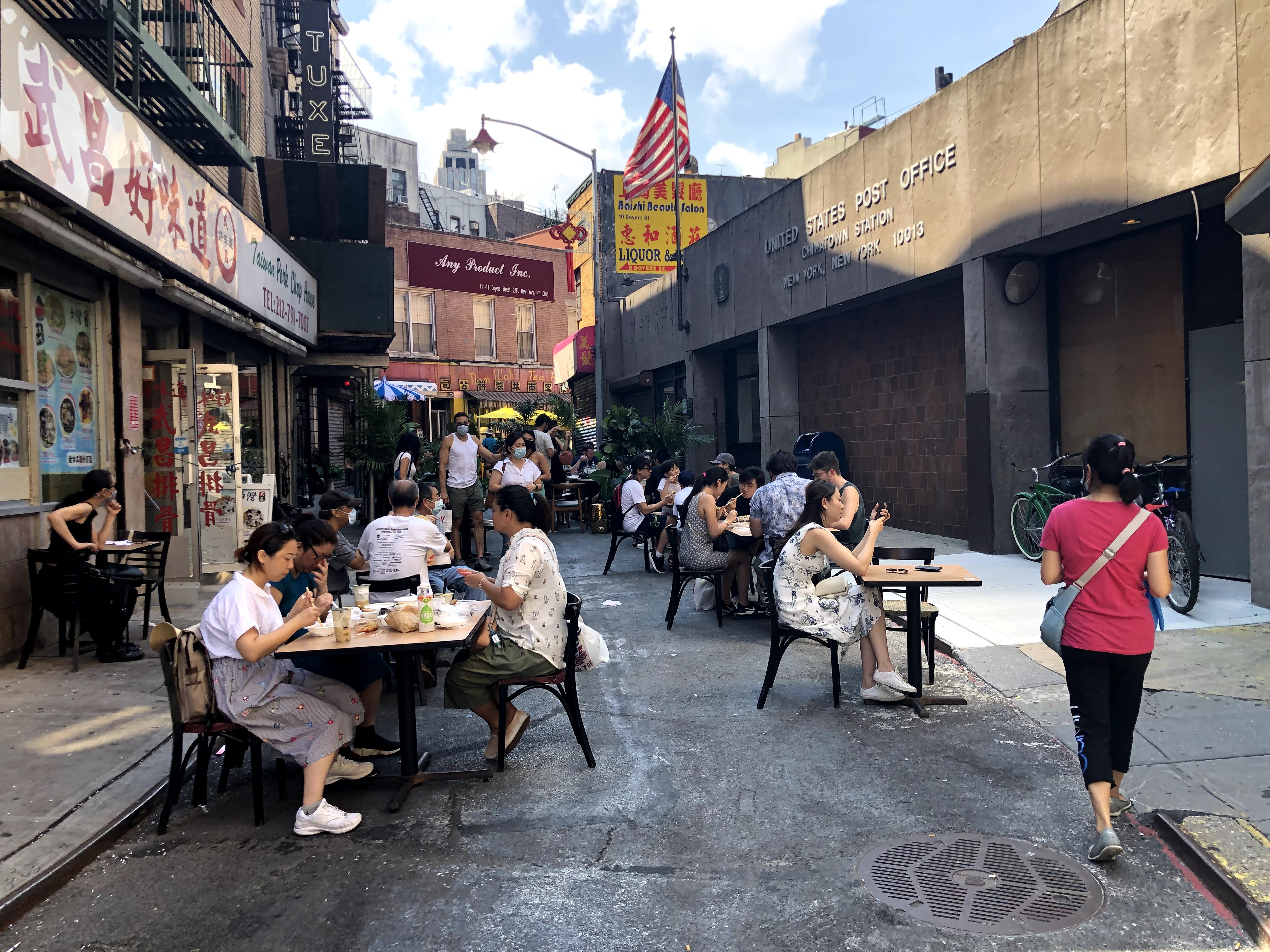 Katherine Nessel
According to data collected by Spectator, the efficacy of the Open Streets program is correlated to the presence of community organizations.

While Bryant keeps city officials and the NYPD informed of her efforts, she herself is responsible for putting up and taking down the barricades each day. Though she described her block association as “anemic” prior to the implementation of the Open Street, Bryant has seen increased involvement among her neighbors as a result of her initiative.

Bryant did not receive financial support from the city government; apart from the barricades, which are provided by the NYPD, her efforts are largely independent and funded by the community.

Similarly, since late June, West Harlem community group 120 Marcus Meets Malcolm has collected just over $1,500 in donations, a sum that falls short of its $5,000 fundraising goal.

Additional viable outdoor spaces are essential to businesses’ reopening efforts, as many restaurants in Morningside Heights seek creative solutions to the challenges of maintaining social distancing in order to welcome students, who make up as much as 75 percent of local restaurants’ clientele, back safely.

“Whether it’s doing maybe tables and chairs in the [Broadway] corridor, letting students dine outside, whether it’s doing better packaging, get students to kind of come into the space,” Wu + Nussbaum co-owner Jonah Fellow said, “what I think first and foremost, you have to figure out how to get students back.”

As the DOT continues to expand the program, community organizers who have managed successful Open Streets advocate for broad community engagement.

“It’s everybody’s space,” 120 Marcus Meets Malcolm organizer Georgia Boothe said. “You have to have somebody who’s willing to just sit down and just figure out things behind the scenes.”

“If you don’t follow the common sense, what can I tell you?” Ieromonahos said.