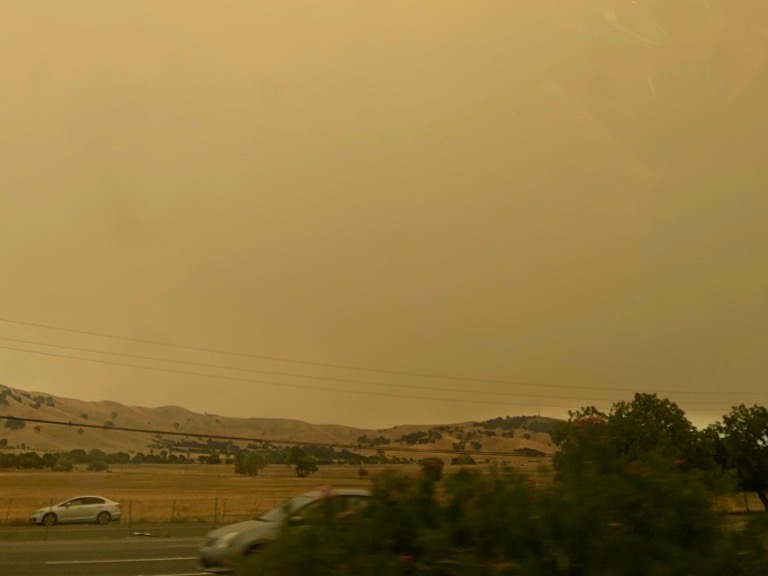 For three Columbia first-years, the start of online classes meant not only accepting a new college life that was entirely devoid of campus life, but also the fear of power outages, missing classes, and being forced to evacuate.

As Columbia students prepared for another virtual semester in the midst of a global pandemic, many in California shouldered an extra burden: destructive, all-consuming wildfires that have ravaged over four million acres of land since the beginning of the year. And while natural disasters have turned innumerable lives upside down in the past year, wildfires have made an already confusing first year of college even more so for the class of 2024.

For three Columbia first-years, the start of online classes meant not only accepting a new college life that was entirely devoid of campus life, but also the fear of power outages, missing classes, and being forced to evacuate.

This year, California has seen its largest wildfire season in recorded history, with several infernos devastating the state this past summer. Among the record-setting wildfires, the LNU Lightning Complex fire—sparked in Northern California by a series of lightning strikes on Aug. 17—has ravaged the surrounding Napa, Yolo, and Sonoma counties as well as three other counties. While the LNU wildfires have since been contained, the ongoing wildfires have continued to displace hundreds of Californians and claimed five lives.

Unlike his peers who spent their first days navigating Zoom and shopping classes, Antonio Carrillo, CC ’24, from Sonoma instead spent his time concerned that his lack of electricity would interfere with some of his first Columbia interactions.

“Electricity lines can rupture and start new fires and so to remedy that problem [PG&E] does something called a rolling blackout where a part of the power grid is just shut off,” Carrillo said. “And so one of my very first classes, I couldn’t get [online].”

Left to sit in silence and fret about the lecture he wasn’t attending, Carrillo’s anxieties were at an all-time high. On top of everything else, repeated Internet difficulties increased the already untold mental obstacles that could prevent a smooth transition into his first year.

Having dealt with month-long power outages in the past, Napa resident Dominic Lee’s family, CC ’24, purchased a generator several years ago, and now sees it as a necessity. And though fortunately not in the immediate path of the fires, in the back of Lee’s mind was always the looming threat of evacuation.

“You [wouldn’t] really have time for school,” Lee said. “It wouldn’t be possible, especially with online school and Zoom.”

Elaje Lopez, CC ’24, similarly found that balancing her evacuation fears and her classes was incredibly stressful. Coursework became just another pressure. Lopez had lived through wildfires before, but this experience was by far the most devastating.

Every day she wondered if and when she might get the dreaded notification to pack up the essentials and leave her home, possibly for the last time. At the start of the semester when the fires were at their peak, a copy of the “Iliad” was a necessity.

Lopez recalled the thick smoke and seeing distant flames from inside her house. She was enduring the worst experience with wildfires of her life while simultaneously juggling her first week of classes.

“There were weeklong stretches where I wouldn’t go out at all … I would literally not leave the house,” Lopez said. “It’s honestly terrifying … It was just apocalyptic.”

Even those on the periphery of the wildfires' destruction faced severe consequences. Lee didn’t face evacuation and yet struggled with suffocatingly toxic air quality and permanently smoky skies.

At its worst, the air quality index was nearly double the number deemed unhealthy. Even when the fires died down, Lee woke up to a haze and the familiar smell of lingering smoke.

“It gets really bad, especially in the mornings,” Lee said. “You can’t even really see across the street a lot of the time.”

But perhaps a more significant burden than the smoke was the endlessly enduring threat of the unknown. While Lopez' family had yet to receive evacuation orders, residents in the nearby city of Vacaville had been evacuated, sparking tense speculation. Lee felt similar stress.

The many difficulties brought on by California’s wildfires only compounded those already created by the COVID-19 pandemic. For example, while exercising outdoors was used by some as an antidote for prolonged isolation, extremely poor air quality eliminated any such possibility.

“You can’t go on a run, you can’t go on a walk. You’re even more confined to your home than before,” Carrillo said. “Even the fires that are out-of-state or many miles away from us … the smoke drifts down and makes going outside or opening your window impossible.”

Even after her many trials of 2020—an upended high school senior year, COVID-19 lockdowns, a grossly incomplete first-year experience, and wildfires—Lopez tried to maintain a positive outlook, noting that her family is safe and together during this time. She also went on to say that, at least to some extent, the introduction of coursework into her life has offered a much needed change of pace.

“The added stress from the classes [themselves] didn’t negatively affect me necessarily, it just added a way to stay busy,” Lopez said. “I guess it offered a distraction … a way to not be thinking about how depressing it was to stay inside.”

In a recent interview, Lopez couldn’t help herself from laughing.