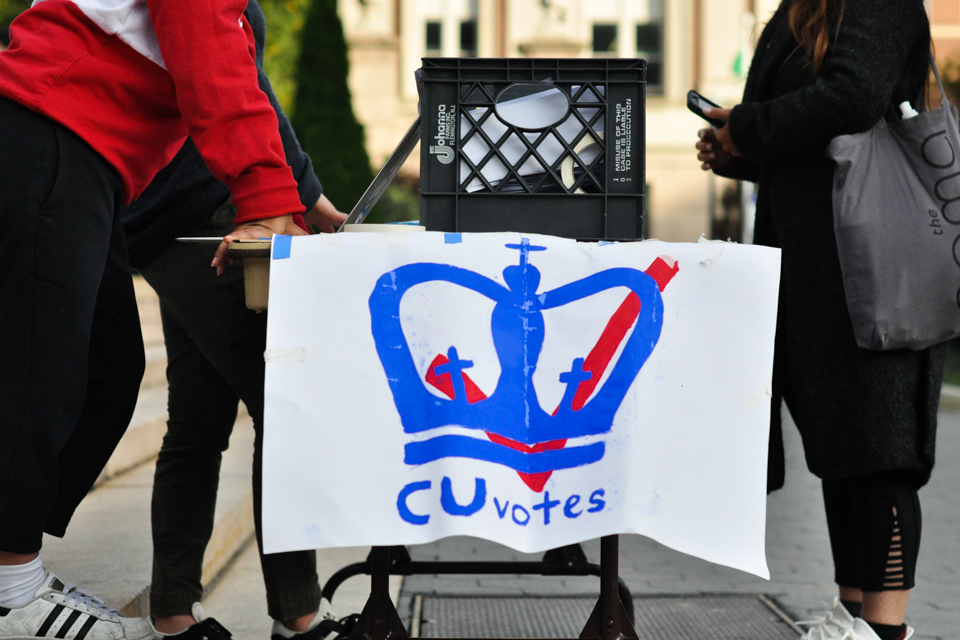 The Forum and the Russ Berrie Medical Science Pavilion will both serve as early voting locations from Saturday, Oct. 24 to Sunday, Nov. 1. This is the first time Columbia will provide early voting sites for a presidential election.

The Forum and the Russ Berrie Medical Science Pavilion will both serve as early voting locations from Saturday, Oct. 24 to Sunday, Nov. 1. This is the first time Columbia will provide early voting sites for a presidential election. The Forum will also serve as a poll worker training site before early voting begins.

In 2019, the New York City Board of Elections was criticized for failing to create enough early voting sites despite receiving a $75 million dollar pledge from the city budget to fund them. Behind New York’s perception of progressiveness, the city has a long history of voter suppression, and, until 2018, it was one of just 12 states without early voting. According to research, early voting has been shown to relieve congestion at polling places, reduce the burden on Election Day poll workers, and foster voter turnout, particularly among traditionally underrepresented voters.

This is New York’s first presidential election to feature early voting, and the BOE has added 27 early voting sites since the 2019 election. Each election, the BOE determines catchment areas around early polling locations to distribute voting populations, meaning each voter is assigned an early and Election Day polling place based on location.

During the primary election in June, Columbia designated Wien Hall as an early voting site at the BOE’s request, which served Morningside Heights and Manhattanville voters. Columbia moved the site to The Forum for the general election, citing the building’s accessibility, vacancy, and proximity to West Harlem, according to Tricia Shimamura, Director of Government Relations in the Office of Government and Community Affairs at Columbia. The BOE rearranged the catchment area for The Forum, assigning early voters living between approximately 116th St. and 141st St. to the site.

“For our local community in West Harlem, it’s a real benefit because it’s centrally located,” Shimamura said. “At Wien, you had to walk into campus, and it felt a little harder to find.”

Of the 88 early voting locations in New York City this election, 16 are in Manhattan, and five of those—including the two on the Manhattanville and Columbia University Irving Medical Center campuses—are above 125th St. The BOE must provide at least one early voting site per 50,000 registered voters.

Experts agree that early voting can facilitate fair elections by addressing voter suppression, and in 2019, when legislation first passed allowing early voting in New York, Mayor Bill de Blasio called it “a chance for us to reinvigorate our democracy.” Disparities in voting accessibility is especially relevant in West Harlem; data on voter participation by census tract shows that in 2019, Manhattanville’s rate of voter participation was half that of Morningside Heights'. The same year, only two of Manhattan’s nine early voting locations were above 125th St., and neither were in West Harlem.

A 2013 Spectator analysis showed that across New York City’s neighborhoods, Morningside Heights and Hamilton Heights have the highest income disparity. That year, the top fifth of the population made more than 30 times that of the lowest fifth. Research also shows that eligible voters with annual family incomes under $10,000 vote at a rate almost half that of eligible voters with annual incomes over $150,000.

“When you ease voting, you get higher rates, particularly in terms of class and race,” Henig said.

As a result, placing more polling centers in locations often accessed by underrepresented communities may increase turnout for those populations. However, if locations for polling sites and resources are not carefully chosen, they may not be as effective.

“Familiarity and comfort are also important: a polling place in a new location that isn’t a community’s normal school or church might breed some discomfort,” Henig said.

Though University administrators unveiled the Forum as a hub to foster connections between the Columbia’s academic community and West Harlem residents, residents have pointed to the building’s starkly different architectural design in addition to the visible presence of Columbia security guards as signs that the space isn’t intended to be accessible for locals.

“I’ve been thinking a lot about ways to expand our civic engagement work beyond the school. We’ve been really focusing on getting undergrads to vote…but The Forum is designed to serve the broader West Harlem community, and it’s important that it’s there.”

Marti Cummings, a member of Community Board 9, a local advisory board representing West Harlem and surrounding areas, as well as a 2021 candidate for New York City Council District 7, said that these new polling places are especially important during a pandemic when people are less likely to travel a far distance to vote.

“Voter suppression is a very real thing, and the more polling locations we have, the more people can participate in our democracy,” Cummings said.