Outside Columbia’s gates on 116th Street and Broadway stand a couple of inflatable rats, put up by representatives from the New York City District Council of Carpenters’ “Why the Rat?” campaign, who say that the rodents are staying up until the council’s demands for higher wages and better treatment of Columbia workers on the Manhattanville project are met.

Citing wages below area standards, insufficient health benefits, and the University’s refusal to participate in state apprenticeship programs, the New York City District Council of Carpenters has taken up in protest against Columbia to demand fair labor practices for nonunionized construction workers at Manhattanville.

For a little over a month, NYCDCC members set up large, inflatable rats outside Columbia’s gates on 116th Street and Broadway as a part of the citywide “Why the Rat?” campaign to protest Columbia’s labor conditions for the construction of its new Manhattanville campus, which resumed on April 19.

They were taken down on Wednesday, according to James Smith, who oversees workers' protections and labor practices for the NYCDCC Area Standards Department and coordinated the campaign, after the University agreed to schedule a meeting with the protest’s representatives to talk over their demands for fair labor practices.

In the months following the start of the COVID-19 outbreak, universities have come under greater scrutiny for lack of regulations around the working conditions of subcontracted workers. Earlier this March, subcontracted workers at Harvard University protested that they did not receive emergency paid leave Harvard granted to direct-hire employees. Most universities, including Columbia, regularly hire subcontracted workers to perform essential tasks, such as Public Safety and construction work. These workers receive benefits and comply with policies as set by their independent contractors and unions, which are not required to provide the same benefits offered to University employees.

As a result, the NYCDCC has criticized Columbia’s decision to contract two firms, Mamais Contracting Corp. and Trident General Contracting, who have both faced lawsuits for underpaying workers and racial discrimination, respectively. While Mamais does not provide construction workers for the dormitories on 125th Street, Columbia works with the firm to fill other construction needs for the Manhattanville project, specifically set aside for nonunion firms.

In a statement to Spectator, a University spokesperson said that the dorms on 125th Street are an “open shop” construction in which multiple firms bid against each other for a contract with Columbia. Bids for the Manhattanville construction project are evaluated by the construction manager on a variety of factors, such as specialty, financial capacity, insurance requirements, safety and ethical record, and performance. Before receiving the award, firms must also pass a third-party integrity check, conducted by the University’s procurement team with a focus on ethical practices.

However, citing the history of Mamais and Trident General Contracting, as well as relatively low wages of construction workers at the 125th Street dorms, NYCDCC members have questioned the efficacy of Columbia’s background checks.

Unlike the rest of Manhattanville construction, the dormitories are also open to nonunion labor, in part with the aim of hiring more local workers, the Columbia spokesperson said. Despite its commitment to local labor in the CBA, local workers only complete 8 percent of total work hours on the Manhattanville site.

The Community Benefits Agreement, which pledged to invest resources into the West Harlem community in light of Columbia’s 17-acre Manhattanville expansion, requires that the University “make reasonable efforts to encourage” service providers, including nonunion construction firms, to pay their employees a “living wage.” However, it does not state specific requirements for the labor practices of contractors hired by the University.

One main concern, according to Smith, is that workers' wages are below New York City averages for comparable construction work, and do not provide sufficient health insurance benefits. To spread word about the council’s demands to the University, he has been posting regular video updates and worker testimonies to the protest’s Instagram page.

“I personally interviewed some of the workers who are demolishing the site right now, and they’re not making good money,” Smith said. “The contractors [should] pay the workers a livable wage, you know: Give them health insurance, retirement benefits, so they don’t have to work until they’re dead.” 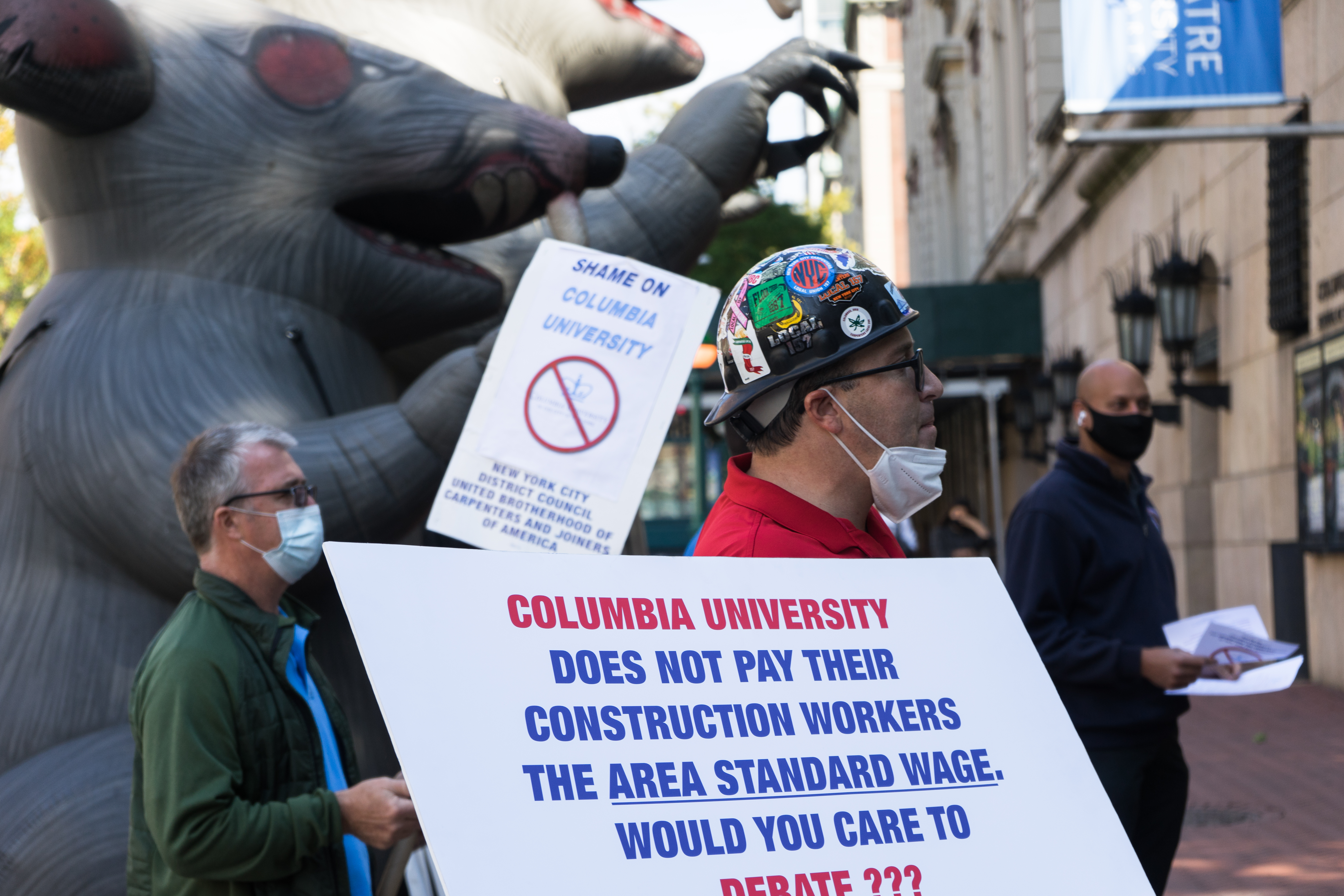 Paul Hanna
For a little over a month, NYCDCC members set up large, inflatable rats outside Columbia’s gates on 116th Street and Broadway as a part of the citywide “Why the Rat?” campaign to protest Columbia’s labor conditions for the construction of its new Manhattanville campus, which resumed on April 19.

As of Oct. 21, NYCDCC has organized two other rat-based protests around the city, which Smith said have been especially effective during the pandemic, when social distancing precautions discourage people from passing around flyers and attending rallies.

Smith said he hopes that the University will uphold its commitment to the CBA and look to the precedent set by previous construction work on the Manhattanville campus.

“The answer is already there—it’s right across the street,” Smith said. “[Columbia is] a big property owner in the area, so it’d be nice to see that they’re being a little more socially responsible with their buildings.”