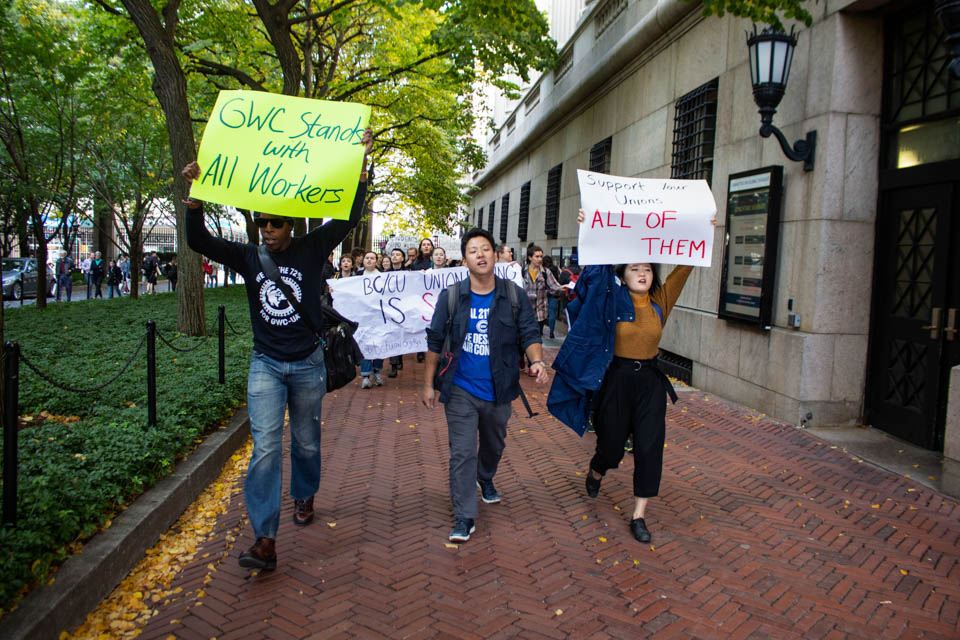 Graduate student workers engaged in a strike against the University in the spring of 2020 in response to failed attempt to bargain. In recent years, moments of political activism on Columbia's campus have become more frequent and less centralized.

During the infamous 1968 student protests, 1,000 protestors flooded Columbia’s campus, occupied five buildings, and were part of one of the largest mass arrests in New York City history. Over 50 years later, however, modern student activism rarely seems to rally the same momentum it drew in past generations.

In recent years, moments of political activism on Columbia’s campus have become more frequent and less centralized. This, combined with the creation of the University Senate, a platform for students to discuss concerns, has led to a trend of smaller, contained campus protests more likely to focus on current political or University issues, as opposed to large demonstrations calling for broader societal changes, like racial equality like in the 1960s.

A study done at Tufts University determined that the 2020 presidential election had the highest youth turnout in history and resulted in a win for the Democratic Party. Following the police killing of George Floyd, which was captured on video, posts flooding Facebook, Twitter, and Instagram have since focused public attention on systemic racism and its consequences. One study shows that social media posts have spurred almost a quarter of adults in the US to reevaluate their views on an issue.

Nevertheless, experts say that the rise of social media activism among younger populations does not mark a return to the “activist-era” of the 1960s. In particular, the digital activism that defines today’s youth activism has largely overlooked the local in-person organizing and grassroots efforts that drove the success of historical movements for civil rights.

During protests during the late 1960s and 70s, many activist groups framed their ideals around works by critical theorists and Black scholars. In fact, many academics cited by today’s Black Lives Matter activists—including Angela Davis and Frank Wilderson—began their research organizing during that era. However, Adrienne Dixson, a professor of gender and women’s studies and education policy at the University of Illinois at Urbana-Champaign, said that present progressive media frequently uses terms from critical theory while ignoring the depth and significance behind those ideas, effectively reducing them to buzzwords.

For example, Dixson pointed to how publications now freely cite intersectionality—the framework which analyzes the many layers of a person’s identities and experiences in order to understand their human experience to the fullest extent—without engaging with the permanence of racism in America, a critical idea explored in the same body of literature.

“We’re socialized to believe that America is this place where everybody can be where they want to be, right?” Dixson said. “For the people [who live there], the reality of America is very different and to name it as the oppression and disparities as related to racism is something that’s very difficult for people to accept, and that it will always be there,” Dixson said.

Michael Miller, assistant professor of political science at Barnard, said online activism—when many share posts and infographics to garner political support—usually seems more effective than it actually has the potential to be.

“There’s a growing concern in our field that too many people focus too much energy on forms of activists that are not really activists,” Miller said. “So you make a post on social media and you feel like you’ve done something, but that doesn’t really move the needle.”

Miller said that although this college generation is politically engaged, they fail to “harness energy” into major policy wins for their causes, like the recent Black Lives Matter protests. A major problem, Miller continued, is that young people underestimate their ability to influence local politics.

“I think people should be aware for the need for tedious involvement in the community, and I think the best thing that people can do is get involved in their local political party if they’re partisan—go to those meetings, do that work, let them put you to work based on the skills that you have,” Miller said.

Dixson said that people fail to recognize the specific skill set it takes to organize successful political protests. When teaching on famous historical events from the civil rights movement, like the 1956 Montgomery bus boycott initiated by Rosa Parks, schools fail to emphasize the complex planning and networking that go into designing such a demonstration.

“We don’t have that necessarily now because people don’t necessarily have that knowledge, and there are some, but even the notion of organizing nationally is kind of hampered,” Dixson said. “Local actions tend to just be marches to particular locations and singing and dancing and that kind of passes as protest, really the change that we saw [in the civil rights movement], the protest was just one piece of it, but it was designed to do something.”

Katie Petersen, BC ’21, and president of ColumbiaVotes, a group focused on registering students to vote and encouraging civic engagement, said that today, college campus activism has become more popular and therefore more institutionalized. Since 1968, the creation of the University Senate and multiple student councils has provided more direct channels for students to communicate with administrators through the institution itself.

“One thing we did see [this presidential election] was youth turnout, so I think that’s really exciting,” Petersen said. “I think in terms of the work we’re doing we have a lot of partner organizations that help us, I’m able to learn from what other schools are doing ... so I think it’s really becoming more institutionalized, and those networks are growing and expanding.”

Ultimately, Dixson said the key drivers of larger political movements are likely not college students—especially those attending more selective schools where students may be disconnected from local struggles.

“So college students ... have their own set of issues on campuses; they in many cases begin to get exposed to events and theories and ideas, so they’re inspired, but people on the ground are experiencing it directly,” Dixson said.