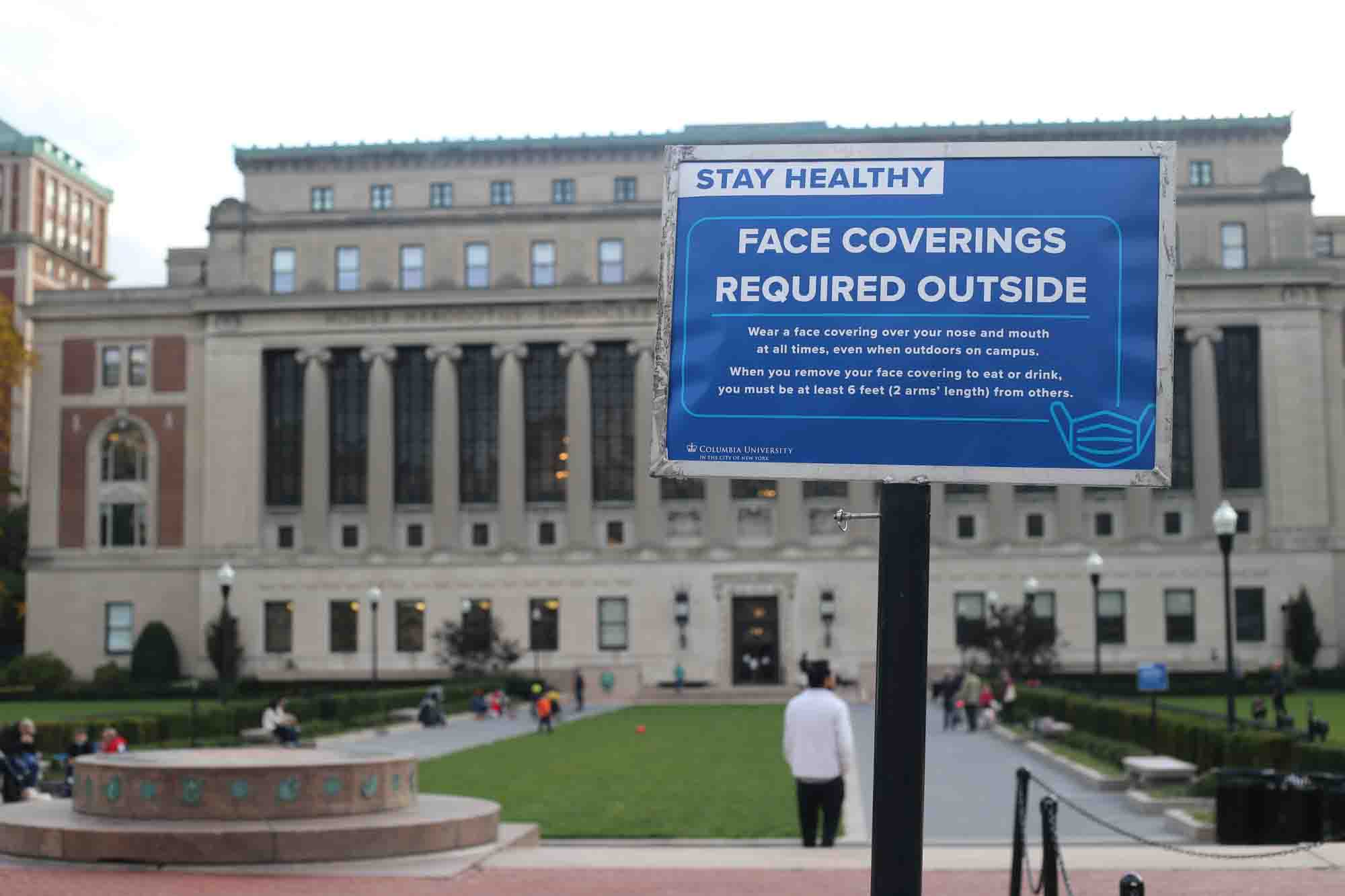 As COVID-19 cases spike across New York City, the positivity rate has reached 4.53 percent, and 127 people have died due to COVID-19 complications in the past 7 days. As the country returns to wide-spread lockdown orders, working-class people of color are again bearing the brunt of the pandemic.

The low positivity rates on campus can be traced in part to Columbia’s rigorous testing program, in which all University affiliates who live on campus are required to undergo weekly testing. Erick Zent, CC ’24 and first-year class president, says the testing is very accessible for Columbia affiliates who wish to use it.

“It’s actually really easy to get the test,” Zent said. “All you have to do is go to the Columbia University Health corner portal and then make an appointment.”

Zent, who is currently living on campus, said that he believes it is a mixture of the weekly testing and the “stringent” enforcement of rules laid out in the Columbia Community Health Compact that have accounted for this low positivity rate. In the upcoming semester, undergraduate students living on campus will be required to test twice a week through the University. At Barnard, where a recent email by President Sian Beilock revealed that residential living will be at about 30 percent capacity, students will be required to test twice a week.

[Related: Columbia asked students to pledge to ensure a campus safe from COVID-19. Not everyone is on board]

While this is good news for Columbia and Barnard affiliates, a far different story exists outside the University’s gates for West Harlem residents, who have been disproportionately affected by the pandemic. Residents in the West Harlem area are especially vulnerable to the effects of COVID-19, due to a significant immunocompromised population, a large proportion of essential workers, greater vulnerability to high rates of air pollution, and limited access to treatment and testing.

Elsia Vasquez, the founder of tenants rights advocacy group PA’LANTE Harlem, works on behalf of low-income residents, who she describes as “majority Black and brown.”

“I would say that 50 to 55 percent of our clients have contracted the virus,” Vasquez said. “Thank God most of them have survived, but the double down and triple down in one apartment being incurred upon definitely has an impact.”

Edwin Torres, a co-chair of the Health and Environment committee on Community Board 9 and a nurse practitioner at Montefiore Medical Center, believes the high COVID-19 rates in West Harlem ZIP codes are due in large part to a lack of access to community resources for testing.

[Related: A COVID-19 vaccine is on its way, but a majority of West Harlem residents won’t see it anytime soon]

While there are multiple hospitals in Community District 9, including Mount Sinai Morningside and NewYork-Presbyterian Hospital, Torres said residents are wary of accessing these resources, as they recall the state of disarray the hospitals were in when the virus first hit in early spring. Low-income Black New Yorkers have long suffered from a shortage of hospitals; 24 hospitals in New York City have closed since 2000, most of them in low-income Black neighborhoods.

“We know that hospitals are doing a great job at providing some of these resources, but we also need to understand the fear that the community has,” Torres said. “If you build it, and they don't come, then you build it for nothing.”

As such, to accommodate the community’s skepticism toward hospitals at the moment, other CB9 members have monthly meetings with the Department of Health and continue to push for more resources directly in the community.

He described the popularity of the City MD located on 146th and Broadway as an example of the efficacy of testing centers available locally.

“There’s a huge line every day,” Torres said. “People prefer to go to places like that because they just feel that this is a safer place than attending a hospital.”

But these community testing sites are rare in the West Harlem area. There are currently no community testing centers in the 10031 ZIP code despite the fact that the population’s COVID-19 positivity rate is greater than 4 percent.

“We absolutely do need a testing center in the community,” Torres said.

Research has shown that high COVID-19 positivity rates directly correlate with areas with high populations of low-income residents as well as lower rates of testing. Wil Lieberman-Cribbin, Public Health ’25, studying environmental health sciences, analyzed data from the New York State Department of Health from the first recorded month of the pandemic and noted the disparities in testing along racial and socioeconomic lines.

“We were really interested in investigating if testing was performed in areas that were proportional to need,” Lieberman-Cribbin said.

Lieberman-Cribbin’s research team studied the distribution of testing and positive test results across 177 ZIP code tabulation areas. They then calculated a Socioeconomic Score, which he described as a “weighted measure of multiple variables such as household income, rent amount, whether the population lives in apartments, education, unemployment, and crowdedness of area,” among other factors.

While his initial research may have only been centered around the data recorded from March 2 to April 6, Lieberman-Cribbin’s team is still noticing a disproportionate lack of testing in low-SES areas.

“We still found that there were more tests regardless in more well off areas like Manhattan compared to central Queens and that the opposite was true for positive results,” Lieberman-Cribbin said.

Community organizations have helped local residents disproportionately affected by the pandemic get the resources they need to protect themselves. Although PA'LANTE has historically been centered around tenant advocacy, Vasquez’s organization adjusted to the COVID-19 crisis to best support the communities it serves. This has meant opening the office seven days a week and adding services that provide much-needed personal protective equipment for tenants in all different boroughs.

Her service in providing necessities like masks and hand sanitizer to these populations has led her to work with the mayor’s and governor’s offices to gather more resources, as well as with the residents themselves to help distribute the resources.

“We have a lot of tenants’ associations in Morningside Heights and West Harlem,” Vasquez said. “[For] the tenants’ organizations that we’ve already built in the community, we get the leaders involved, and when it comes to the different buildings that we know are in the community, we just go there.”