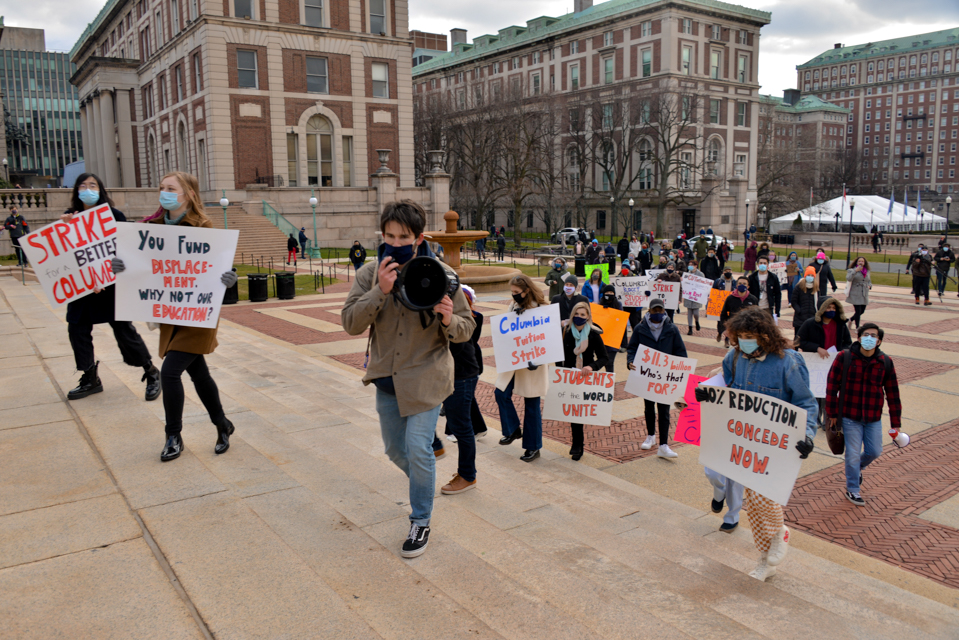 Willem Morris, CC ’21, leads a group of student organizers, politicians, and rally participants up Low Steps, chanting and bearing posters emblazoned with the demands of the tuition strike.

In front of an array of posters emblazoned with red and black slogans, the Columbia-Barnard Young Democratic Socialists of America mounted a rally in support of its tuition strike. The rally began with a press conference in front of University President Lee Bollinger’s 60 West Morningside Drive home and culminated in a march to the steps of Low Library.

A movement that began last summer and one that has now amassed more than 4,000 student supporters, the YDSA strike has expanded on its initial tuition reduction messaging—which at first included a 10 percent reduction in tuition and a 10 percent increase in financial aid allocation. To create a larger platform to support social justice issues, the new demands include the recognition of the graduate student workers’ union, a police defunding effort, divestment from fossil fuels, and an investment in affordable housing. Local political candidates have joined Columbia student groups with a range of diverse goals to build a coalition for more collective action.

“We wanted to have a show of support,” Willem Morris, CC ’21, a YDSA organizer said. “And have some New York City politicians who have supported the campaign come out and endorse us in person.”

Christian Flores, CC ’22, who is also a YDSA organizer, kicked off the press conference portion of the rally with an opening argument for tuition reduction. He cited the University’s $310 million increase in endowment worth last year, $8 billion in unrestricted assets, and nearly $974 million in liquid assets as evidence of Columbia’s ability to meet YDSA’s demands. 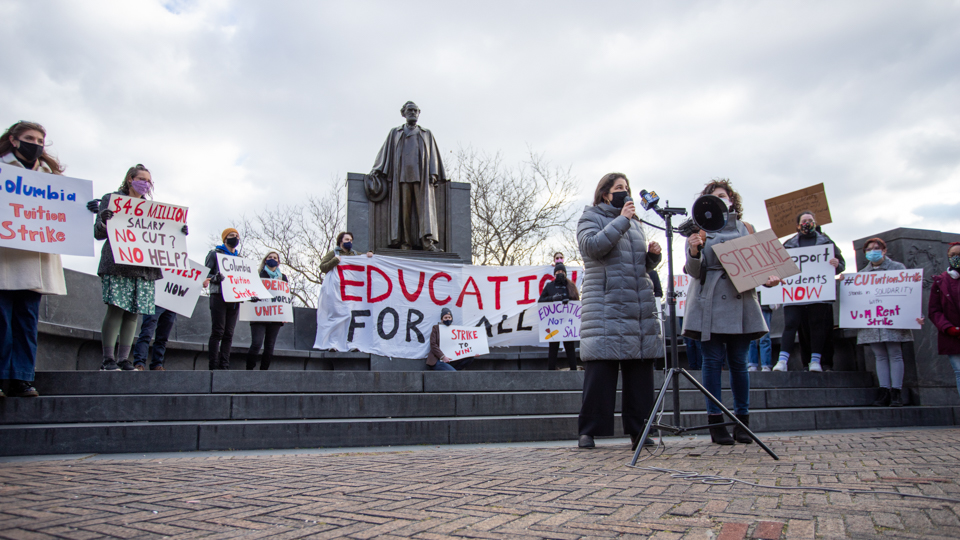 Columbia legally cannot spend a majority of the $310 million made from returns on its investments. In addition to the required use of endowment funds for its donor-designated purposes, the Uniform Prudent Management of Institutional Funds Act mandates the implementation of an endowment spending policy. This means the University can only utilize a stated percentage of the market value of the endowment each year, in accordance with the spending policy and the law.

Columbia-Barnard YDSA pointed to Bollinger’s reported 2018 salary as a sign of the administration’s inequitable allocation of resources. Bollinger—who made $4.6 million in 2018 as the highest-paid Ivy League president that year—took a pay freeze this year while the Barnard administration took pay cuts, which includes a 20 percent reduction in President Sian Beilock’s salary.

While the specific tuition reduction demands anchored the event, other local candidates for public office spoke on broader policy issues of affordable education and Columbia’s role as a powerful institution within New York City.

The rising cost of tuition—and thus, the greater need for students to take out loans—has long been a discussion on Columbia’s campus. Arthur Schwartz, CC ’74 and a candidate for New York City Council District 3 representative, spoke during the rally about his frustration that today’s student movements are making the same demands his peers made when he was still an undergraduate. Back then, students tried to push back against a $50 increase from the then-tuition rate of $1,000. Now, with the tuition for Columbia College at $58,920, he was more than ready to show his support for a new generation of student activists.

“Shame is a word that we should be using. It’s been 50 years and you’re still here making the same demands,” Schwartz said.

Maria Ordoñez, one of the original founders of the Columbia-Barnard YDSA and a candidate for New York City Council District 7 representative, gave a speech in front of the crowd that also advocated for tuition cancellation.

“We need to cancel tuition now. We need to invest in West Harlem. We need to make these demands now,” she said. “The people in power are making a profit out of working-class New Yorkers and Harlem, for the sake of making a profit, for the elite institution. Politicians need to listen to the community.”

Ordoñez emphasized the importance of ensuring that if Columbia continues to expand into West Harlem, it needs to make sure that it provides affordable housing for locals, not just wealthy New Yorkers who might want to move to the neighborhood.

Since 2009, when Columbia purchased 6.8 million square feet of land in West Harlem for $6.3 billion, it has faced criticism from West Harlem residents for its use of eminent domain, heightened surveillance of the community members and cooperation with law enforcement, and a lack of support for long-term community initiatives.

Despite being one of the biggest landowners in New York City, Columbia only pays property taxes on a subset of its holdings, including vacant lots and spaces, some housing assets, and commercial spaces. New York state law exempts most property taxes for private universities, colleges, and hospitals, costing the city roughly $1 billion in revenue each year. Dianne Morales, SSW ’93 and a candidate for mayor of New York City, highlighted this discrepancy in her speech to rally attendees.

“Quite frankly, the first thing that I’d like to see Columbia do is to actually pay its fair share. The fact that they are exempt from property tax among many other things is just absurd to me. They need to reinvest in the community that they have pillaged over their existence, and that is one very easy way to start,” Morales said.

While Morales is correct that universities and hospitals are property tax exempt, the exemption is not absolute, as Columbia pays yearly property taxes on its land holdings beyond that of its undergraduate campus and medical center. Even though it is unlikely that Columbia would be required to pay property taxes for all of its land, Morales thinks that if leaders like Bollinger “were to become aware that there is a conversation about having them pay taxes” there could eventually be more pressure for the University to invest in the community.

“There are deeply rooted structural and systemic issues that we actually need to have the courage and commitment to address in order to stop the tide of poverty and criminalization of poverty, and the inequities and disparities of this country,” Morales said.

Coalition building within and beyond Columbia 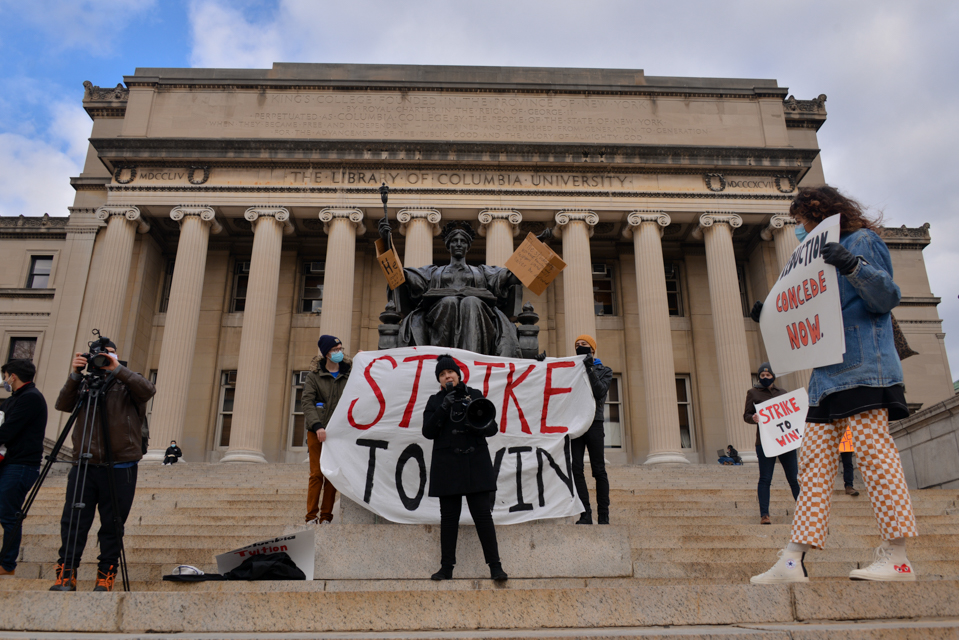 Kathy Fang
City Council candidate and Columbia student Maria Ordoñez, CC ’21, appeals to a crowd of over 50 students and community members gathered on Low Steps to rally for the student-organized tuition strike, which is the largest in history.

“This is a moment when an active reappraisal of the status quo is understandable, and we expect nothing less from our students,” a University spokesperson said in response to the rally. “Their voices are heard by Columbia’s leadership, and their views on strengthening the University are welcomed.”

YDSA organizer Matthew Gamero, CC ’23, stated that the University’s response to today’s events was a “typical liberal response, in the sense of recognizing the institutional structures yet not changing anything about it.”

According to its student leaders, YDSA seeks to build a coalition not just with politicians, but with other social justice-centered organizations on campus such as Mobilized African Diaspora and Students for Justice in Palestine in hopes of finding commonalities between their respective movements.

Morris, who was instrumental in planning the rally, is currently organizing to build a rapport with members of the West Harlem community to “discuss more about how students and members of the Harlem community can work together in leveraging their power to make change.” They plan to utilize Community Board 9 meetings and Ordoñez’s connections to West Harlem to inform their demands regarding the treatment of the community.

“It’s important for the tuition strike,” Morris said. “Not just to build this solidarity for spring semester 2021, but to have a larger platform for each of these groups, and to work together in the future, because all of our struggles are connected.”

Rachael Su, BC ’22, was an observer at the rally who felt that the University is not upholding the “progressive values” that it claims to have as an institution at the “forefront of education.”

“Columbia’s responsibility, if it wants to keep claiming such things, is to its students and to its faculty and to its workers to actually uphold what it says it believes in, which I don’t think it’s doing at the moment,” she said.

As Morris and other leaders will be graduating in the spring, their goal with the rally and the student tuition strike overall is to set up foundations for more groups of students in the years to come.

“This is about much more than just this tuition strike,” Morris said. “This is about building a larger student platform and educating students about these issues for the long-term future.”