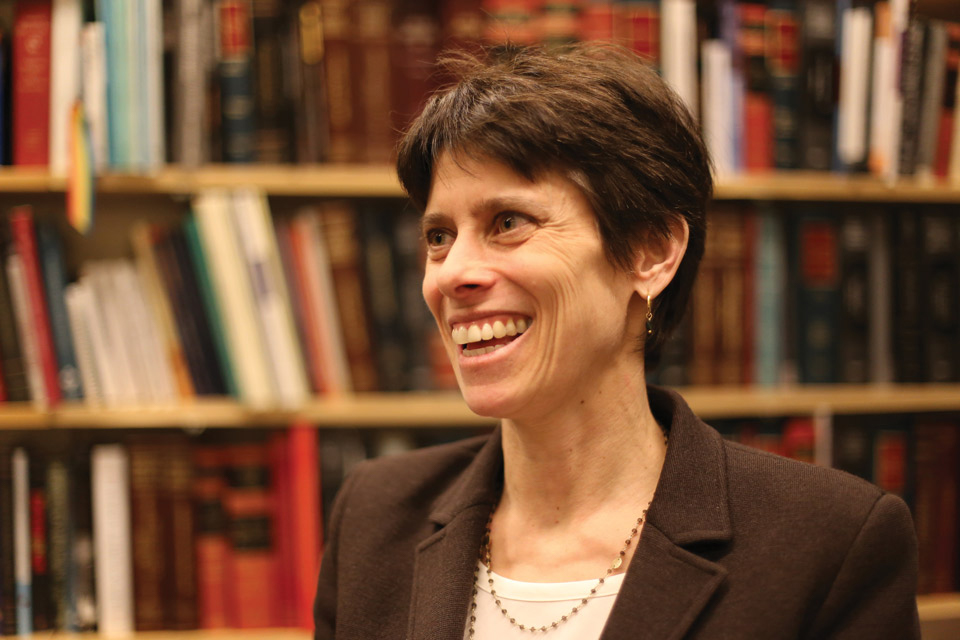 Former Executive Vice President for University Life and rules administrator Suzanne Goldberg has been appointed Deputy Assistant Secretary for Strategic Operations and Outreach of the Office of Civil Rights under the Biden administration.

After a tumultuous term marked by student protests, contentious lawsuits, and national controversies, former Executive Vice President for University Life and rules administrator Suzanne Goldberg has been appointed Deputy Assistant Secretary for Strategic Operations and Outreach of the Office of Civil Rights under the Biden administration. As part of her new role, she will be responsible for overseeing national investigations into discrimination on the basis of race, skin color, national origin, sex, disability, or age.

Goldberg served for six years as Columbia’s first EVP of University Life and for seven years as a special advisor to the University president on sexual assault prevention and response. Throughout her tenure, Goldberg repeatedly came under fire for her handling of Title IX policies and cases of gender-based misconduct, and the University was the subject of numerous Title IX-related OCR investigations. Experts and former colleagues believe Goldberg’s firsthand experience with Title IX on college campuses will help usher in a new era of Title IX policies, but students who filed complaints under Columbia’s Gender-Based Misconduct Policy remain hesitant about what those policies might entail.

Specifically, Trump officials revoked the Obama administration’s “Dear Colleague” Letter on transgender rights in 2017 and issued numerous other regulations and rules to reverse Obama-era policies. These changes caused widespread confusion on college campuses about how to handle Title IX investigations.

According to Peter Lake, a Title IX expert and Stetson University professor of law, Goldberg’s main focus in the OCR will be to bridge the gap between the diverging Title IX policies of the Trump and Biden administrations and to clarify federal guidelines that colleges will follow moving forward.

“Job number one is to try to figure out how the Biden administration’s objectives translate into connecting with prior OCR guidance and dealing with the Trump administration’s regulations, commentary, and then of course, the litigation that has gone on out there [and] trying to make sense of it all,” Lake said. “From a legal point of view, it’s a Herculean task.”

In an interview with Spectator in November 2018 when the DeVos rule was first leaked, Goldberg said that she had anticipated conflicts between the Trump administration’s regulations and the University’s standing policies, which were ultimately forced to change. In response to the requirement of cross-examination in sexual assault cases, she also wrote an op-ed for the Chronicle of Higher Education criticizing the practice and arguing that it “would undermine, not enhance, the fair and impartial treatment that all students deserve.” Though these rules are still in effect, President Joe Biden promised to overturn DeVos’ regulations last May.

In 2016, Goldberg defended a new University policy that prohibited those involved in Title IX investigations from recording meetings with investigators or copying documents by citing that such recordings would have a “chilling” effect on investigations. This discouraged individuals from speaking out in fear of legal retribution. In response, students and organizations like No Red Tape started an online petition that pressured the University to repeal the policy. One former student criticized this policy in what became a viral essay, where she discussed the disparity between what was discussed during her interview and what was in the University’s report; she was able to point out these differences by recordingall of her meetings. In January 2017, Columbia stopped enforcing this policy.

One year later, students disrupted one of Goldberg’s classes in protest of her alleged failure to comply with Title IX guidelines. She was teaching an undergraduate seminar, Topics in Sexuality and Gender Law, when eight students entered her classroom with signs that included phrases like “You shouldn’t be teaching this class.”

Amelia Roskin-Frazee, CC ’20 and one of the students at the 2017 protest, cites the University’s mishandling of her reports of rape as her cause for concern that one of Goldberg’s new responsibilites is overseeing Title IX.

In 2017, Roskin-Frazee filed a high-profile lawsuit against the University after informing Goldberg and her office that she had been raped. 11 days after her initial assault—which Goldberg did not report—Roskin-Frazee was allegedly assaulted again. Though she informed Goldberg about the first incident in December 2015, the University did not investigate either incident until September 2016. Roskin-Frazee claimed that Columbia’s handling of her case “created a culture of sexual hostility on campus and [the University] acted with deliberate indifference.”

“I’m very concerned that she now has a higher-up position at the office that has been used to investigate her in the past,” Roskin-Frazee said.

Goldberg has previously faced criticism for holding positions that created conflicts of interest: In 2015, in addition to becoming the first EVP of University Life, Goldberg was also appointed rules administrator, a position that allowed her to determine whether a student accused of violating the rules would be adjudicated. As rules administrator, Goldberg could determine whether a student protesting her handling of Title IX cases would be disciplined by the University, giving her oversight over student criticism of University Life.

In her new role at the OCR, Goldberg is expected to, among other responsibilities, oversee federal implementation and investigations of Title IX guidelines, a job that Lake says will be strongly informed by her “operational experience” as a college administrator.

“One of the things I like about her in this role is that she has been under fire, and she knows what it’s like to get sued, be criticized, and to have people attack your positions,” Lake said. “This is the operational reality and she brings an understanding of that.”

Katherine Franke, the James L. Dohr Professor of Law at Columbia, founded Columbia’s Center for Gender and Sexuality Law with Goldberg as her co-director in 2006. In reference to Goldberg’s time at Columbia and those who filed Title IX forms during her tenure, Franke said, “To be honest, no matter what she had done she would have gotten criticism from ... many angles.”

In addition to sorting out Trump-era Title IX regulations, Goldberg is expected to redefine campus culture around gender-based misconduct prevention, a responsibility that she has exercised in her past positions. According to Lake, Goldberg’s work at Columbia has been centered around creating a more supportive campus culture to prevent sexual misconduct and encouraging survivors to report their cases.

“Goldberg is famous for promoting [sexual respect] culture, climate type work,” Lake said. “I would assume that among the things that she’ll be working on is figuring out how that work and OCR attunes with potential grants or other federal opportunities to go out and try to improve the culture on college campuses.”

Rosie Ryan, BC ’20, spent her time at Barnard as an advocate for sexual safety on college campuses and pushed the administration to better support sexual assault survivors. As the co-president of Take Back the Night, Ryan helped organize marches and protests to bring awareness to gender-based misconduct and to create a community around sexual advocacy.

Ryan found that the administration failed to listen to student voices and often prioritized accommodating faculty or protecting the reputation of the University.

The culture that her policies created was one of the other points that many students criticized Goldberg for, despite her previous legal work surrounding equality. She came to Columbia after launching her legal career at Lambda Legal, the country’s first and largest legal organization focused on achieving full equality for LGBTQ people. At Lambda Legal, she was a part of two cases that became cornerstone gay rights victories at the U.S. Supreme Court: Lawrence v. Texas, the landmark decision that struck down Texas’s sodomy law, and Romer v. Evans, which overturned an anti-gay Colorado constitutional amendment.

Though her previous record signals more representation of LGBTQ activists and voices in the federal government, Roskin-Frazee argued that Goldberg’s actions as a Columbia administrator have expressed ambivalent support of protections for LGBTQ students. The University did not explicitly prohibit outing someone as transgender or gender-nonconforming as a form of gender-based misconduct until 2017, when Goldberg and the University implemented new protections for trans or gender-nonconforming students, though students were still forced to out themselves to the administration in order to report a case.

Despite some student opposition toward Goldberg’s appointment, former colleagues like Franke point to her extensive and diverse experience as a win for Title IX in a post-Trump era.

“She [Goldberg] has both a worm’s eye and bird’s eye view of what Title IX is supposed to do to protect students, print and protect an equal educational environment at a place like Columbia,” Franke said.

Still, Goldberg’s appointment has left students with questions about what her time in Washington will mean for universities across the country. For some, her new appointment highlights a disconnect between the perspectives of administrators and the students they serve.

“The OCR should have talked to students and the people who have worked within the system with her and not people from the outside just watching things go down, because it looks very different if you’re not the one dealing with it,” Roskin-Frazee said.