NYCHA maintenance issues have skyrocketed since the pandemic. How can residents hold NYCHA accountable?

NYCHA maintenance issues have skyrocketed since the pandemic. How can residents hold NYCHA accountable? 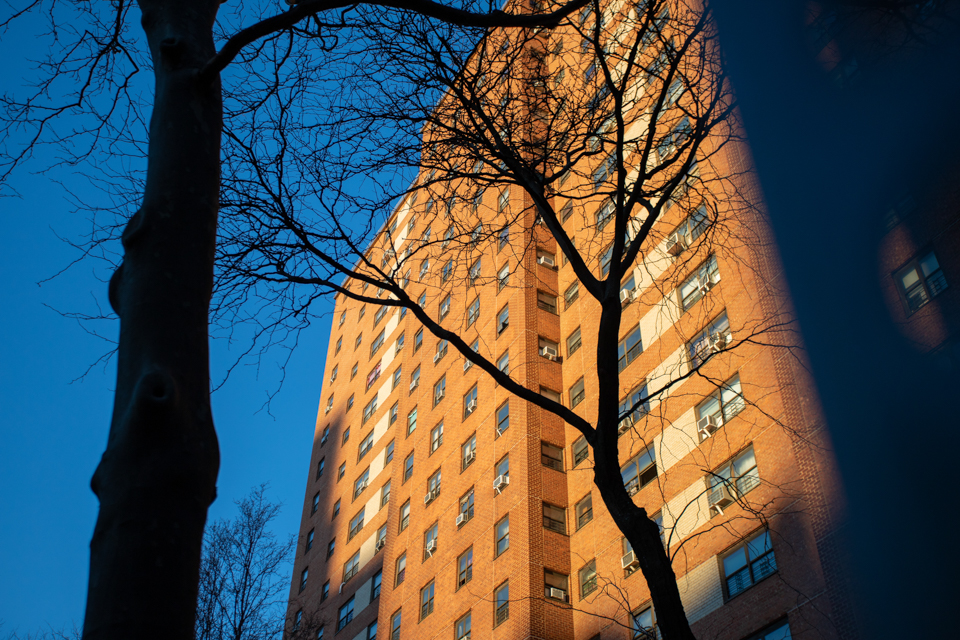 Open work orders at the Grant Houses, pictured above, have risen 25 percent year-over-year.

Across the city, open work orders for maintenance issues in the Grant Houses of the New York City Housing Authority development in Morningside Heights requiring attention skyrocketed 40 percent from 344,960 in December 2019 to 483,240 in December 2020. This drastic increase can likely be attributed to the pause on some maintenance work in the early months of the pandemic and decreased funding as the city faces a financial crisis, compounded with the longstanding lack of agency within NYCHA.

These maintenance issues, predominantly regarding paint, walls, and lead, have drastically impacted the quality of life for many residents.

“We have a problem with the elevators,” Moses Sistrik, a Grant Houses resident, said. “We have two of them, but a lot of the time one of them is out or skipping floors.” Another resident mentioned a severe rat problem throughout the complex. 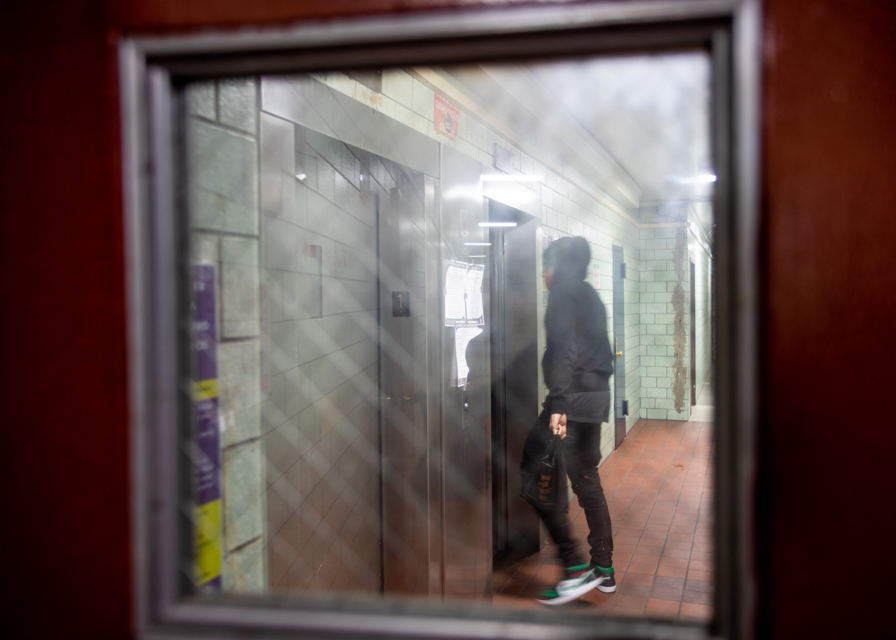 Even when maintenance is undertaken, it usually takes extended periods of time and disrupts the living environment.

“They’re doing the repair of the gas,” resident Reina Breha said. “It’s been like two months … it makes a lot of noise, very annoying.”

Within the walls of the decades-old buildings, the issues worsen. Lighting is sporadic due to burnt out fixtures. Moreover, structural cracks line the graffiti and soot covered hallways and chipped paint pieces lie scattered on the ground. 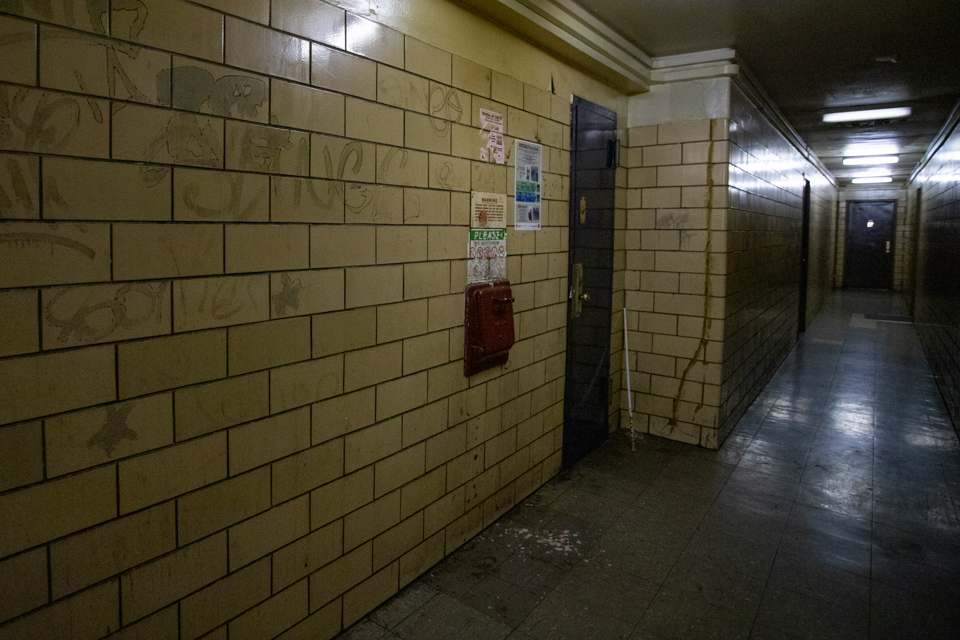 Rommel Nunez
Hallways inside the buildings are poorly maintained and poorly lit.

Paint and lead issues have proven consistent issues throughout West Harlem along with NYCHA in general.

“COVID, with more than valid reason, is the biggest elephant in the room, but it’s not like these other health disparities disappear,” Edwin Torres, the Manhattan Community Board 9 Health & Environment Committee co-chair, said during the Feb. 1 meeting. “We remember that lead was all over the news with the NYCHA buildings, but March started and we had the pandemic picking up steam…”

The dangers of lead in NYCHA housing remains high. A recent investigation found that lead posed a risk to children under the age of six living across 9,000 NYCHA units. The Grant Houses are no exception, with 449 open work orders regarding lead at the end of December.

For young children, lead can induce permanent brain damage at even the slightest exposure; the Centers for Disease Control and Prevention has declared no level of lead exposure as safe for children. The behavioral and learning issues caused by lead poisoning leave low-income children of color at a disadvantage compared to their peers who live in better-maintained living environments, perpetuating income inequality and racial inequity. Other housing deficiencies, such as peeling paint, can lead to severe health issues, including high rates of childhood asthma.

“We’ve been very effective in organizing tenants to submit letters of complaints,” Stan Morse, lead organizer with the Justice for All Coalition and candidate for Queens borough president, said. “The more leverage we have collectively becomes the foundation of a lawsuit.”

The Justice for All Coalition has used this strategy in NYCHA housing developments across the city to expedite gas, elevator, grounds, and other types of repairs. The Coalition also depends on gaining the support of resident associations, required under the Housing and Urban Development Act of 1968 that outlines conditions for federal funding. Each association is tasked with democratically representing the development and advocating for residents’ needs to ensure an adequate living situation.

Morse said that it is easier for the Coalition to be able to talk about the development when resident association presidents are active. However, often, tenant associations “say they represent residents, but the reality of it is that very few residents come to their meetings,” he added.

While the Grant Houses Resident Association has handed out masks and provided food for residents during the pandemic, there has not been any recent public pressure on NYCHA to improve living conditions. Outside advocacy groups have not recently been involved with the Grant Houses to a large extent, leaving residents without the organizing network other NYCHA developments have built.

A lack of proactiveness and agency within NYCHA has also led to deteriorating conditions.

“It seems to me [that NYCHA] is giving these maintenance workers an excuse to be lazy,” Mike Jones, former maintenance worker himself and co-founder of the OneNYCHA podcast, said. Through his work with OneNYCHA, he has interviewed various politicians in the city to push them on public housing concerns and bring awareness to the inadequate treatment NYCHA residents experience. 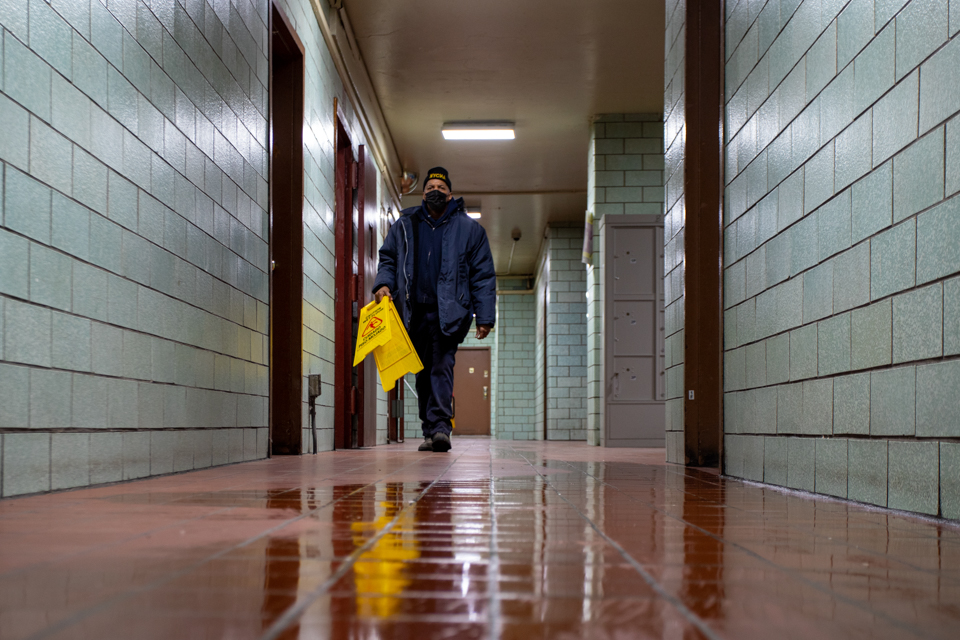 Rommel Nunez
A janitor cleaning in the Grant Houses on Jan. 30.

“We should be able to call somebody in a high position and say ‘this was not getting done’” to hold NYCHA accountable, Jones said.

When reached for comment, NYCHA defended its track record with maintenance following the onset of the pandemic.

“When NYCHA residents lose full or partial income, or receive unemployment benefits, due to COVID-19 or any other circumstance, their rent will decrease and will still always be 30 percent of their income,” Rochel Leah Goldblatt, deputy press secretary, said in a statement. “Although this provision serves as a built-in protection for hundreds of thousands of New Yorkers living in public housing, when large numbers of families have rent decreases—as is happening now with COVID-19—it diminishes NYCHA’s ability to repair and preserve our buildings.”

With the unemployment rate in New York City increasing from 3.4 percent pre-pandemic to 11.4 percent as of December, NYCHA has lost a lot of income from unemployed residents. NYCHA relies on the profit gained from its residents’ rent to fund its preservation efforts.

However, some leaders do not agree with NYCHA that the worsening conditions can be directly attributed to the pandemic.

“I think that they’re using the pandemic as an excuse,” Morse said, “because these problems that these residents are fighting for have existed long before the pandemic, and during that time period they couldn’t get people to come [and fix issues].”

According to local experts, given the issues NYCHA faces, the key to substantively improving maintenance will be increased funding and personnel coupled with new programs to reimagine upkeep and expand access to affordable housing.

“There are all sorts of ways that, on paper, public housing is a fantastic alternative, and honestly in the past it was,” David Robinson, housing lawyer and Executive Committee member of the Morningside Heights Community Coalition, said. “Since then it’s been allowed to deteriorate, mostly through lack of funding and some managerial incompetence.”

One potentially promising initiative that could improve maintenance conditions is localizing maintenance workers and having specialists address different issues.

“They are now initiating a new pilot program where they’re going to have skill workers in the management office directly,” Morse said. “What that’s supposed to be able to do, as a tenant goes and makes a complaint, they would actually be able to get a schedule for a skilled worker to come out, go directly instead of going to some central office.” In theory, a localized maintenance program should improve response time and quality of repairs.

The Skilled Trades Pilot Program, introduced in October at four Queens developments, has improved productivity performance by 18 percent since the program’s start. However, it remains to be seen how effective the program will be at reducing open work orders going forward.

The issues that affect the Grant Houses and all NYCHA developments bear complexity and require a thorough reimagining of how public housing residents are treated.

“I mean, we should have all the opportunities in [public] housing, but we barely have anything,” Jones said. “We could do a better job.”