Housing, natural disasters, and streetscape: the various fronts of environmental racism in Harlem and throughout the city

Housing, natural disasters, and streetscape: the various fronts of environmental racism in Harlem and throughout the city 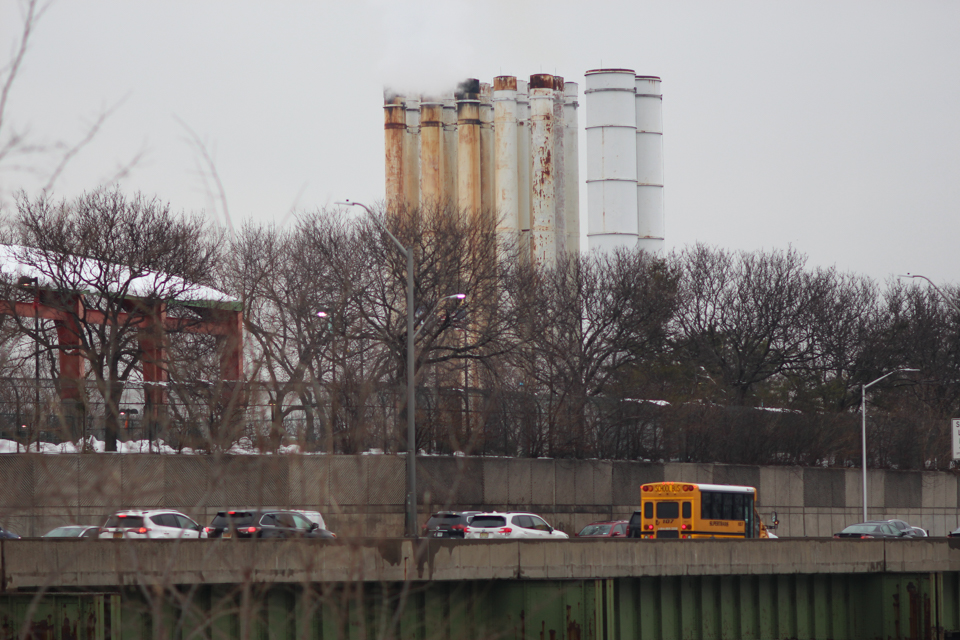 he North River Wastewater Resource Recovery Facility began its operations in 1986. The facility, which treats 170 million gallons of raw sewage and wastewater per day, is located along the Hudson River, between 137th and 145th streets.

High air pollution rates. Toxic waste plants. High temperatures. These are only some of the issues that West Harlem residents face as a result of the ever-worsening climate crisis, coupled with systemic neglect on the part of government officials, the New York City Housing Authority, and the disproportionate number of pollutant-producing entities in the area.

West Harlem, a neighborhood composed of mostly low-income, Black, and Latinx residents, has been disproportionately impacted by environmental issues, climate change, and what experts call “environmental racism.” The term refers to the policies and systemic actions that create disproportionately hazardous living conditions for neighborhoods largely composed of people of color.

The North River Wastewater Resource Recovery Facility began its operations in 1986. The facility, which treats 170 million gallons of raw sewage and wastewater per day, is located along the Hudson River, between 137th and 145th streets—close to West Harlem. As a result, the strong smells of raw sewage and the fumes from the hazardous plant permeate through the West Harlem residential community nearby.

The effects of the toxic waste plant are so damaging that in 2000, the New York Times referred to the surrounding area as a “sewage chernobyl.” 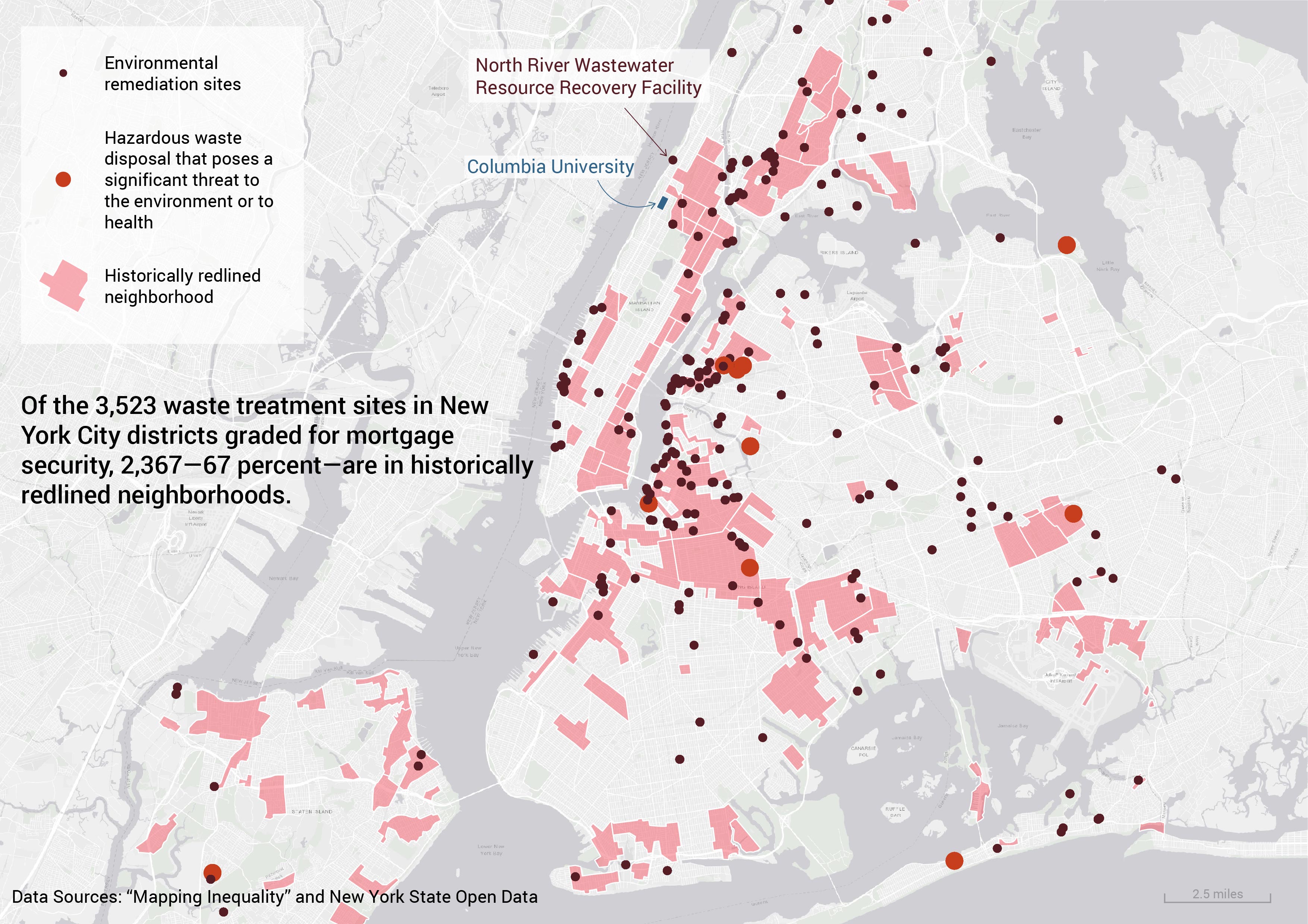 Environmental racism is a prevalent issue throughout New York and disproportionately affects Black and Latinx working-class residents within neighborhoods with lower socioeconomic standings than their white, more affluent counterparts.

Given the lack of green space, communities of color experience higher pollution and temperatures partly because of racial bias in how the government addresses climate resiliency throughout the city.

“We should all be worried that climate change … [brings] winners and losers if it keeps going the way it is,” Thaddeus Pawlowski, managing director of Columbia’s Center for Resilient Cities and Landscapes and former official in the New York City Office of Emergency Management, said. “Winners will be rich, white people, and the losers will be people of color, working-class people.”

As the climate crisis increases the number of natural disasters that occur, marginalized communities are disproportionately affected when disasters strike due to their historic disparities in access to governmental resources.

“Disasters really set different neighborhoods, depending on the position and race and class, into very different trajectories,” Pawlowski said. “Some neighborhoods were able to rebuild right away like … the Rockaway Peninsula.”

The Rockaways, a low-lying portion of Queens known for its beaches, bore the brunt of Superstorm Sandy. Due to historical redlining, the peninsula exists on a race and wealth gradient that increases in whiteness and wealth from east to west, ending in a gated community that is about 95 percent white. The western side of the island has gotten much more attention in resiliency efforts, gaining a new ferry terminal and refurbished facilities at Rockaway Beach. Investments like a $341 million storm-resistant boardwalk, meant to benefit the entire peninsula, have instead contributed to skyrocketing home prices that push lower-income residents of color out of their communities. One neighborhood on the western side, Belle Harbor, saw the median home price increase from $600,000 pre-Sandy to over one million by 2018.

Around the city, more green space and greener ways of getting around are necessary to decrease the urban heat island effect. Extreme heat leads all other extreme weather events to cause an average of 450 emergency room visits each year in New York City, mainly in communities of color with less vegetation to counteract the rise in temperature induced by asphalt. Depending on the exact trajectory of climate change, the death toll from extreme heat is expected to increase from 1,552 to 3,331 deaths annually in New York City by 2080.

Edwin Torres, the health and environment co-chair for Manhattan Community Board 9, noted the necessity of more green spaces within the West Harlem area and more ecological transportation measures, such as charging stations for electric vehicles, in the community.

“We have to create more green spaces; we have to come up with innovative ways on how we’re going to incentivize folks to have greener cars,” Torres said.

Some transportation activists, however, are advocating for fewer cars over greener cars. One method in the process of implementation is to charge a “congestion pricing” fee for all cars entering Manhattan below 60th Street to simultaneously discourage car use and use the funds collected to bolster environmentally-friendly transit service.

“There’s roughly a 38-to-1 ratio … for every one low-income person who may get hurt by congestion pricing, 38 benefit from congestion pricing,” Sam Schwartz, a former New York City traffic commissioner, said, referencing a Community Service Society study.

Schwartz, who has pursued transportation consulting for the last 30 years, has focused on addressing “gridlock,” as he coined it, in the city through measures like congestion pricing. While he has advocated for congestion pricing since the 1970s, it has only gained traction in the past few years and won approval in the 2019 state budget.

According to transportation engineers like Schwartz, protected bike lanes, frequent bus service, reliable subway service, and congestion pricing are key to achieving equity in all other aspects.

“Without good transportation, you’ll have rampant joblessness, inequality, health issues, all of those things,” Schwartz said.

Even in transit-rich New York City, transit deserts exist in communities of color that make jobs harder to reach. The average commute to work for a white New Yorker takes 36 minutes, while it takes an additional 10 minutes for the average Black New Yorker.

Black commuters are also more than twice as likely to get to work using buses, which had an average speed of 6.7 miles per hour pre-pandemic citywide. While New York City Mayor Bill de Blasio’s administration promised to quickly implement 20 miles of new bus lanes and busways this past summer, that goal has not been reached.

“We have to rethink our streets; the streets have been designed for these motor vehicles and larger and larger motor vehicles to move faster and faster,” Schwartz said. “And we’re putting very vulnerable people right next to them.”

The urban fabric of New York’s roads were built around the 1930s policy of  “redlining,” whereby mainly Black and Latinx neighborhoods were designed to not be eligible for loans and mortgages, along with the “urban renewal” movement of the mid-20th century. Planners like Robert Moses, the “master builder” of roads in the city, advocated for highways to bisect predominantly Black and Latinx neighborhoods to get rid of “undesirable” neighborhoods, infusing those communities with air pollution from heavy traffic. “We can’t let minorities dictate that this century-old chore will be put off another generation or finally abandoned,” Moses said in a 1959 speech.

In Harlem, the Robert F. Kennedy Bridge deposits traffic at 125th Street despite spanning from Queens to Manhattan’s Wards Island, which is located more than a mile south. Despite being designed to mainly carry traffic from points south in Manhattan, a more logical landing on the Upper East Side was dismissed, according to a commentator at the time, because of “a combination of regard for the wealthy Upper East Side, disregard for the residents of Harlem, and plain old-fashioned graft.”

Now, the surviving elders and descendants of more than 250,000 New Yorkers—who are predominantly Black and Latinx—have been displaced throughout the 20th century and face high rates of asthma and other airborne illnesses due to the traffic brought into their neighborhoods. The highways earned the moniker “white roads through Black bedrooms,” referring to the influx of white suburban commuters using them to access central business districts and polluting predominantly Black and Latinx inner-city neighborhoods.

“Our efforts as urban planners and urban designers is to take a step back and look at the way that our own profession perpetuated environmental racism,” Pawlowski said. “What we also have to do now is really retool planning and design to be much more allies and advocates for people on the ground.”

Systemic environmental injustice stretches to all facets of life in the city, including the public New York City Housing Authority.

Lead has proven to be a sustained risk for residents; 130,000 of NYCHA’s 175,000 apartment units were painted with lead before it was outlawed in the 1970s and are currently plagued with a lack of proper maintenance. The neurotoxins of prolonged lead exposure can cause behavioral and neurological problems. NYCHA federal monitor Bart Schwartz found that the number of apartments with children under six and had lead exposure was three times higher than NYCHA claimed a couple of years ago.

“We already know there’s lead paint in NYCHA buildings; we’ve known this since they built it,” Charles Callaway, director of organizing and membership for WE ACT for Environmental Justice, said. WE ACT is a nonprofit organization in West Harlem centered around climate activism and environmental justice in New York City. Callaway noted that the locations of bus depots, waste plants, and plumbing facilities in West Harlem are a result of systemic racism that has been prevalent throughout history.

[Related: NYCHA maintenance issues have skyrocketed since the pandemic. How can residents hold NYCHA accountable?]

Lead poisoning is not the only danger abundant in communities of color; asthma disproportionately impacts Black and Latinx neighborhoods. For the Zone Improvement Plan codes covering West Harlem, asthma prevalence per one thousand Medicaid recipients was around 131 in the fiscal year 2012-13, whereas it stood near 110 for the Upper West Side.

“We’re working on climate change to reduce the amount of carbon emissions that are given off by boilers, by air conditioners, by gas stoves,” Callaway said, about the NYCHA Climate Mitigation Roadmap. Among other initiatives, the program aims to electrify residents’ stoves and boilers to reduce pollution risks for residents. One study found a strong correlation between children with gas stoves and asthma, with those children experiencing asthma symptoms at a 42 percent higher rate than their peers with electric stoves.

Torres noted that these disparities are not a result of biological factors, but ones that are completely systemic.

“I don’t think that a kid that is born in West Harlem genetically is very different than a kid who was born in the Upper East Side or in other areas of the city that have a lower rate of asthma,” Torres said.

The issues of higher rates of air pollution, lead poisoning, and lack of access to safe and affordable housing are not things that must inherently impact children in West Harlem.

“These are man-made disparities, and we need to pay attention,” Torres said. “So that they can be fixed and corrected.”

The environmental impacts from inside the house to out on the streets underlie the severity of the problem.