The union plans to stop teaching classes and conducting research until members successfully negotiate with Columbia for their first labor contract.

Standing on the steps of Low Library, graduate and undergraduate student workers of the Graduate Workers of Columbia-United Auto Workers announced on Thursday their intention to strike on March 15. Union members plan to stop teaching classes and conducting research until they successfully negotiate with Columbia for their first labor contract.

Student-workers of GWC voted 1,833 to 77 last March to authorize the strike. The union’s ten-person bargaining committee, which is made up of elected representatives who represent each jurisdiction of the unit, called the strike. For the past two weeks, the bargaining committee has been meeting twice a week with Bernie Plum, the University’s outside counsel, and various deans and administrators for hours-long bargaining sessions.

The rally falls on the two-year anniversary of initial bargaining discussions. The delay in reaching an agreement is a result of the complexity of discussions and decision-making behind the issues of union recognition, University finances, and students’ rights, like health benefits and recourse for harassment and discrimination. 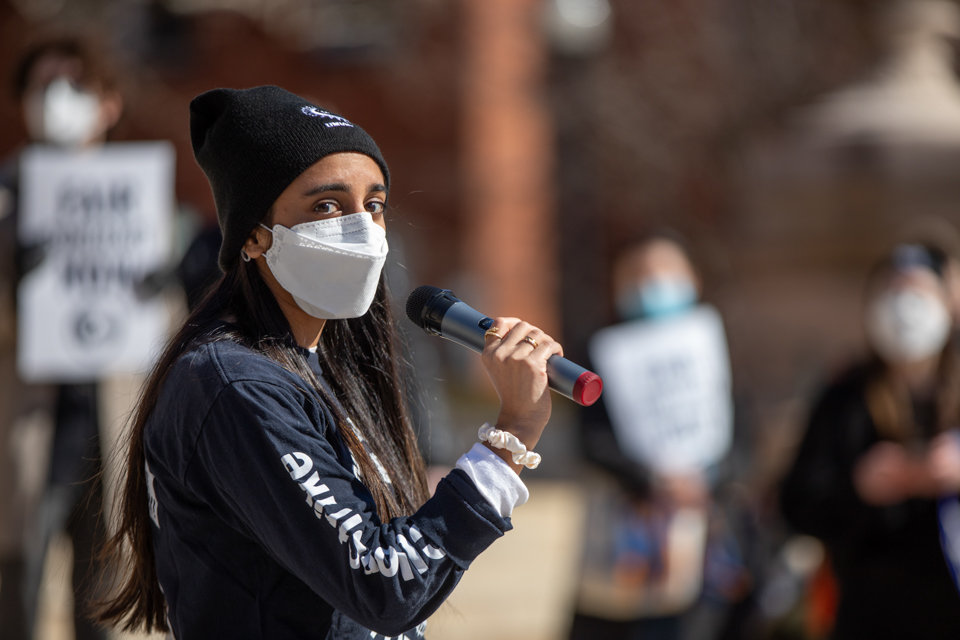 “The University has left us with no choice,” GWC bargaining member Kinnari Shah said to the crowd. “We are committed to securing a contract that improves working conditions, including our right to adequate health care and protections from discrimination and harassment. We will not settle for less. Today, after two years of bargaining, we set a deadline for strike.”

Lauren Moseley, a third-year doctoral candidate in the department of earth and environmental sciences, has been a member of the bargaining committee since fall 2019. She hopes the rally not only gave a platform for union workers and advocates to share their stories but that the strike announcement will further pressure the University to reach a fair contract.

“We’re excited to come together and not only announce our strike deadline but have folks speak out about what the past two years have been like for them––both at the bargaining table, as organizers, local politicians from the New York state area––and speak to the strength of organizing and the importance of union and union protections,” Moseley said. 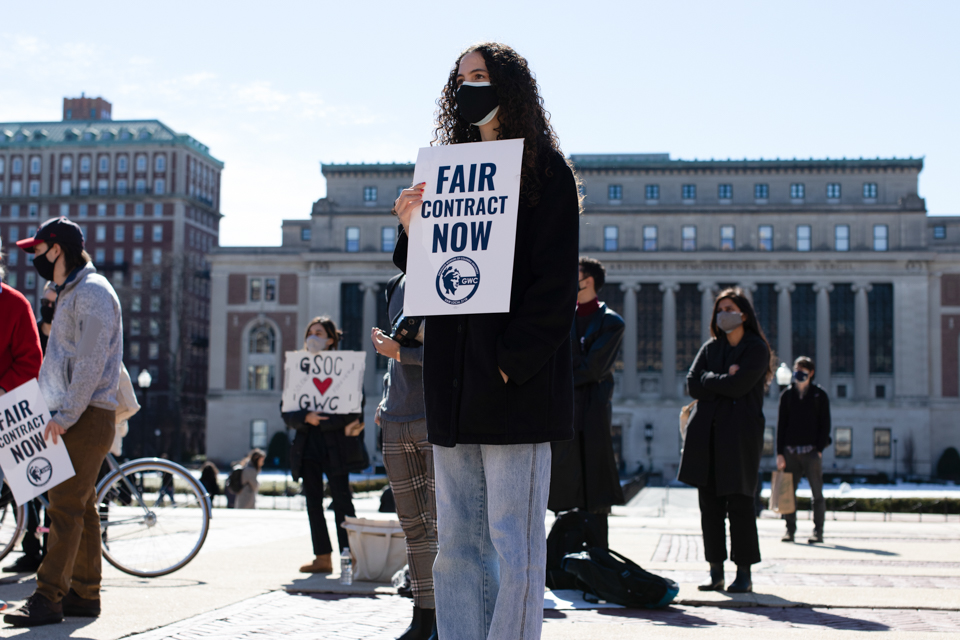 Even before issues of policy, the central point of contention between GWC and Columbia is union recognition. Currently, the University only recognizes fully-funded doctoral students as members of the union. The union, on the other hand, also recognizes master’s students and undergraduate teaching assistants.

Although master’s students may teach the same courses or work in the same labs as doctoral students, they differ in one significant sector: finances. Depending on the program year and area of study, doctoral candidates receive funding from the University or external grants to pursue their degrees. Master’s students, however, do not receive such funding and pay tuition like undergraduate students.

Written into the 2018 framework agreement that allowed bargaining to start, Columbia said it would recognize the union as certified by the National Labor Relations Board. The NLRB, which in a landmark case overturned the law to allow Columbia student workers to unionize in 2016, has upheld that doctoral, master’s, and undergraduate students are eligible members of the union. The union says Columbia is now reneging on its written commitment to recognize the entirety of the bargaining unit.

In previous court filings, Columbia established the position that work was an educational experience, not employment, for master’s students. It has since softened that stance but maintains a proposal that excludes master’s students and undergraduates from the bargaining unit.

“We are pleased with the progress being made in our negotiations with the union, and we look forward to resolving the outstanding issues and reaching a full and fair agreement,” a University spokesperson said.

The consequence of this impasse is that some bargaining agreements are held back by a singular difference in terminology. For example, on issues of child care and sick leave, both sides have come to a general agreement on policy, but not on who will benefit from them. The union hopes to reach a contract that will benefit all of the approximately 3,600 student workers it represents. 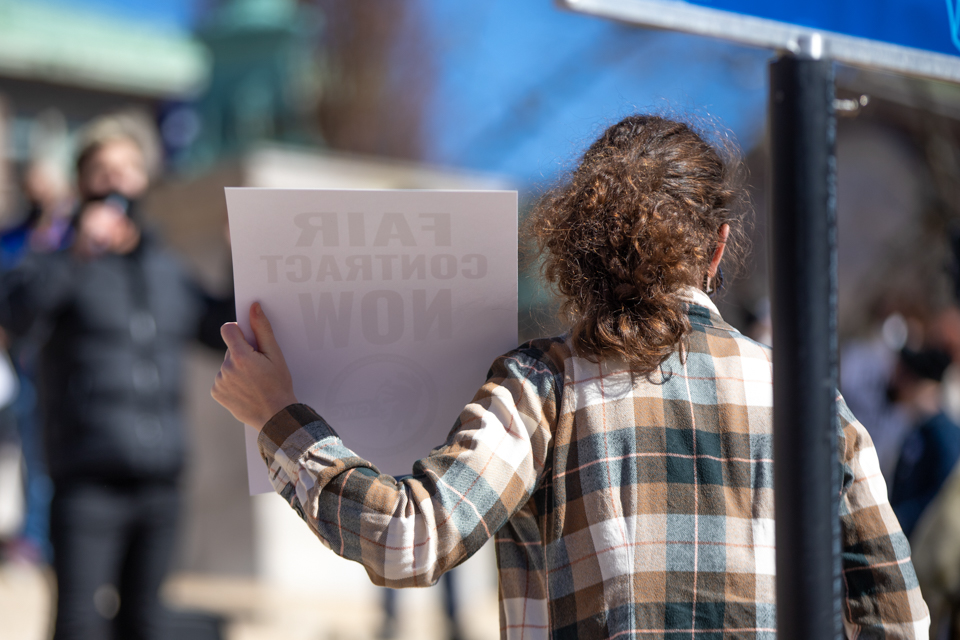 Steven Lazickas, a bargaining committee member and second-year master’s student at the School of International and Public Affairs, said the exact language is what determines whether students in the bargaining unit have access to the rights won for other members.

“Those few words determine whether or not I can get leave, whether I’m sick or ill or a family member is ill,” Lazickas said. “If it’s restricted to Ph.D. students, then, for example, if my partner gets sick, I would be unable to take the time I need to take care of them. Immune systems don’t exactly vary depending on academic standings, so neither should these article items.”

The union is proposing sweeping health benefits for its workers, including improved dental care, vision coverage, and better funds for emergency services. Bargaining members are hoping in part to make up for the loss of Columbia’s 100 Plan in August 2019, which provided quality health insurance for students, especially those with chronic illnesses.

Union members argue that the 100 Plan was unfairly rescinded because bargaining was ongoing. The University claimed that because the health care plan was for students, the decision did not fall under the purview of the workers’ union. With the ongoing pandemic, however, health care remains a top priority for striking students.

“When they dropped the 100 Plan, between higher copays and the higher prescription costs, I ended up having to pay an extra $1,500 to $2,000 a year just based on the copays and prescriptions filling up. … The current plan is just not sufficient for people who have chronic health conditions,” Ty Janoski, a fourth-year Ph.D. student in the earth and environmental science department, said. “I almost feel that it is discriminatory––none of these conditions are my fault, but I have to pay significantly more money.”

Yarran Hominh, a fifth-year Ph.D. student in the philosophy department, said the agreement is encouraging, but child care is only one complexity for a parent living in New York.

“Especially with the pandemic, child care has been the big issue, and we’ve made some advances on that front with negotiations recently, but child care in New York City costs upwards of $20,000,” Hominh said. “A $4,000 subsidy is a step in the right direction, but it’s not enough for a family on a graduate worker stipend when you have children. That’s a big concern for me.” 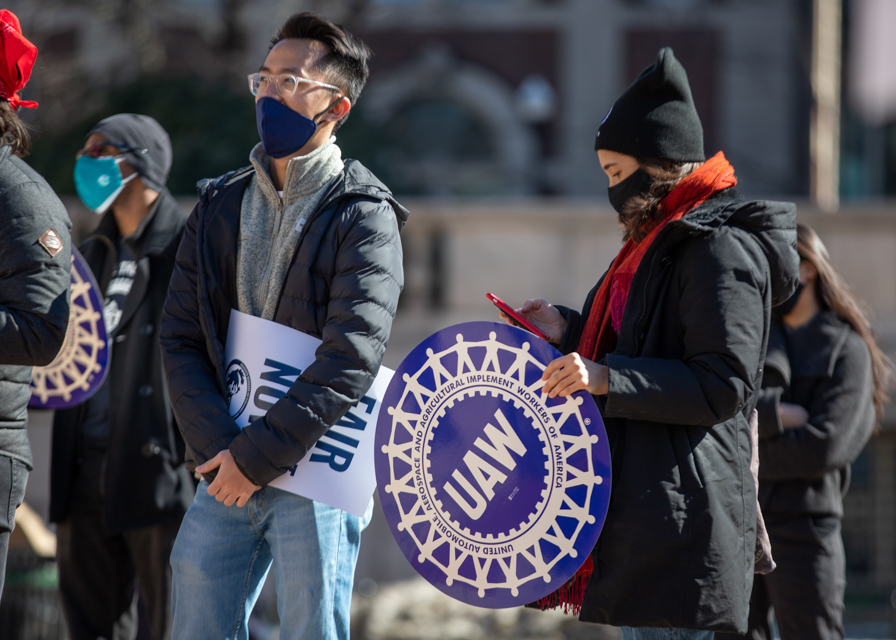 Another way GWC hopes to mitigate the effects of the pandemic for its workers is a one-year extension for Ph.D. students. With a guaranteed extra year of appointments, bargaining committee members argue that they are providing an easy mechanism to make sure no student is overlooked.

Sophia Mo, a fourth-year Ph.D. student in the French department, was planning to conduct research in Algeria, Tunisia, and France for her dissertation last summer. Her funding was pulled when Columbia-related travel was suspended, and with limited access to libraries and archives, she believes she has lost a year of research.

“I don’t actually know if I can write the dissertation that I planned on writing, the dissertation that I’ve already submitted a prospectus for,” Mo said. “Because international travel has not been possible, I would be more reassured in my ability to do so if we could get promises from Columbia regarding funding extensions.”

Columbia administrators do not support the one-size-fits-all approach for appointment guarantees. Graduate School of Arts and Sciences Dean Carlos J. Alonso said during open-door bargaining meetings that the University prefers for each department to contact Ph.D. students directly and identify what kind of help they need. The University has also suggested that extra appointments are outside of the purview of the bargaining agreement, as the issue relates to a student seeking a degree completion instead of an employee seeking a right from an employer. 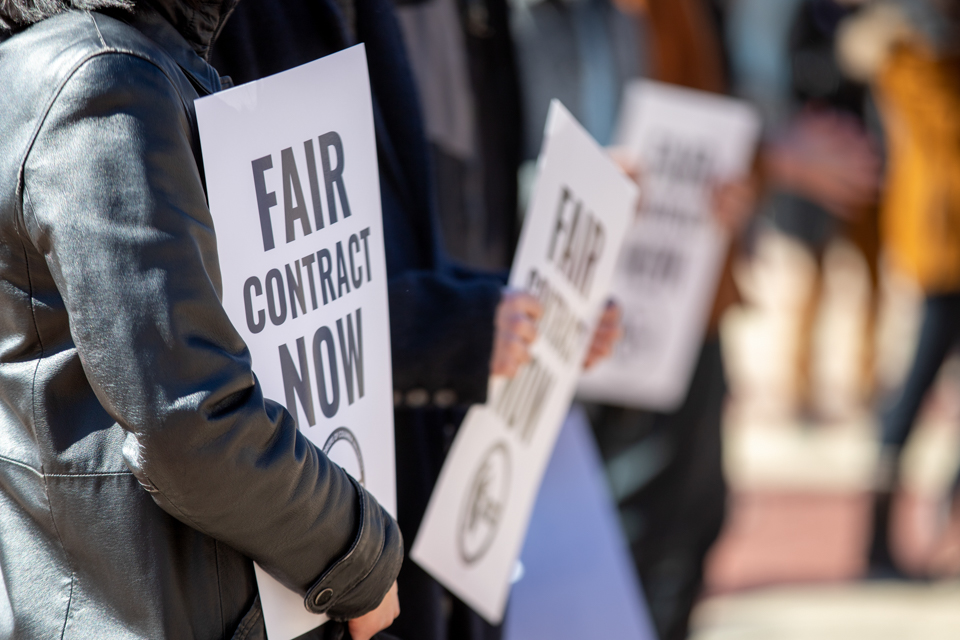 The University response is consistent with a central tension between its decentralized nature and union demands. Not only are Columbia students split into 20 schools, but information and finances are distributed across individual schools and departments. This complicates the union’s request for anonymous data access on its membership body and the accumulation of funds for University-wide policies.

“Decentralization at Columbia is really a curse, and it’s been causing issues for far too long now,” Moseley said. “We really have been seeing this pop up in negotiations. We’re not denying that it’s going to be some work both on the union’s part and the University’s part to bring this contract online and begin enforcing it. It would not be without work, but the issues that arise from Columbia’s federation of schools, from their total chaos behind the scenes, doesn’t help anyone. It’s unfair to characterize the union as the root of these issues in our negotiations.”

About 10 demands remain on the bargaining table with the issue of union recognition hanging over the proceedings. Even with the union spread out across the globe, bargaining committee members said they believe strongly in the efficacy of their proposed March 15 strike.

“If you can work remotely, you can strike remotely,” Lazickas said. 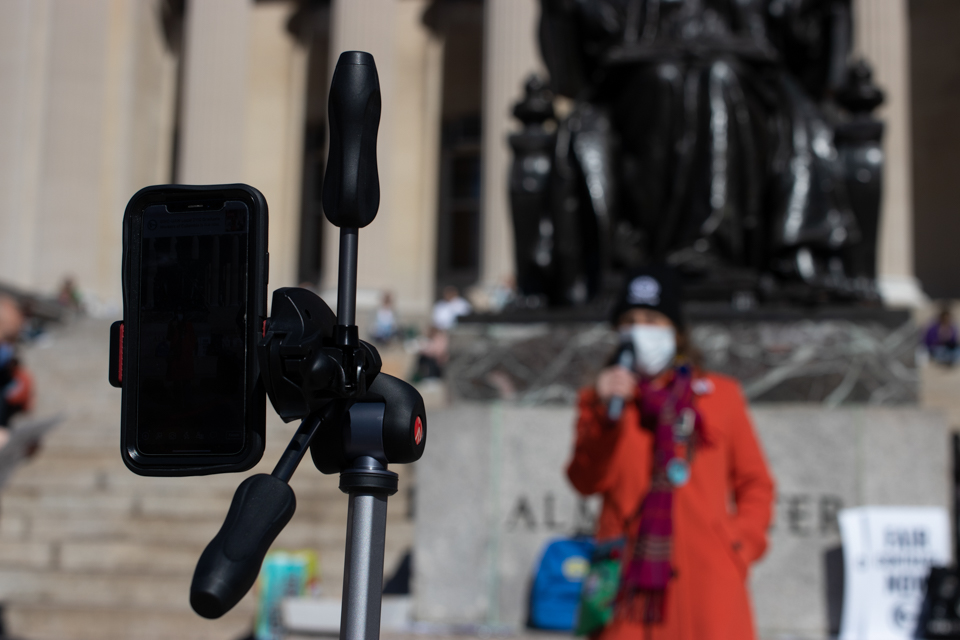 This would be the second ongoing student strike on Columbia’s campus. A coalition of largely undergraduate students, led by Columbia-Barnard Young Democratic Socialists of America, has been striking since January for a tuition reduction. One of the strike’s demands is for Columbia to bargain with GWC and grant full recognition to the unit. Willem Morris, a YDSA organizer, spoke at Thursday’s rally.

“We can see how there’s a mobilization nationwide of people who are trying to do something against University administrations who have predatory behavior,” Ph.D. candidate Izzy Plowright said. “This is inscribed in a wider movement, and that gives me a lot of hope.”

Both sides are conscious that whenever they reach an agreement, they must do so with the approval of their constituencies––for the University team, that means going to the deans, and for the bargaining committee, to its unit. With the pandemic providing even greater urgency and a reminder that two years have gone by since bargaining started, the University and union are looking to reach a contract expeditiously.

“It’s become even more urgent and crucial for us to achieve our contract with mechanisms of recourse for our student workers who are experiencing really tough times,” Moseley said. “During a pandemic, having an issue like late pay is unacceptable, and we really need workplace protections and these mechanisms for negotiation with our employer, now more than ever.”