Student-led Four Women Fund has redistributed over $24,000 to Black womxn in need

Student-led Four Women Fund has redistributed over $24,000 to Black womxn in need 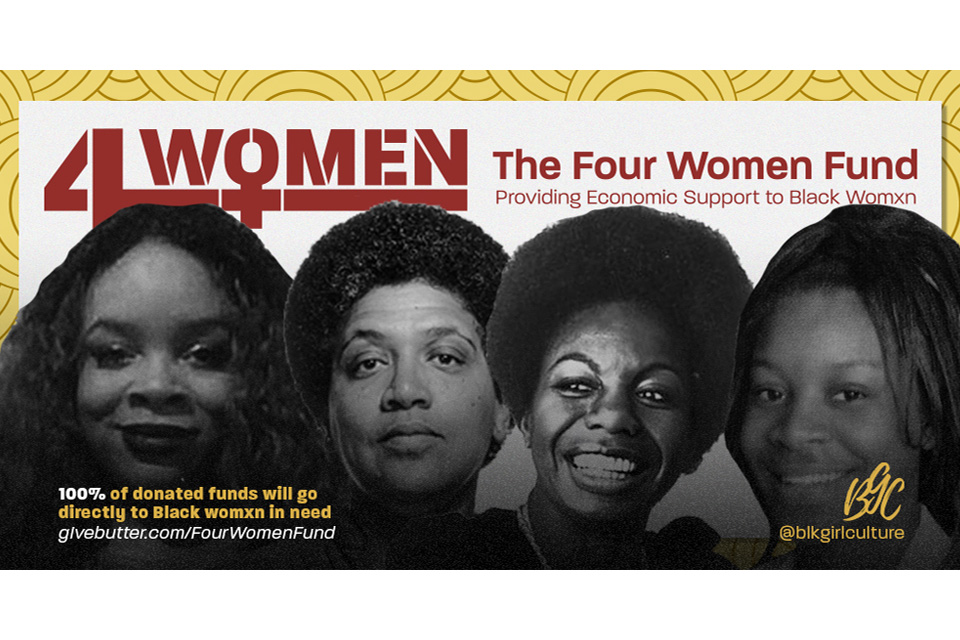 The Four Women Fund / Courtesy Of

From left to right, the four women depicted in the fund’s cover image are Ashanti Carmon, Audre Lorde, Nina Simone, and Sandra Bland.

As conversations around anti-Blackness gripped the nation this past summer, three Columbia students came together to create change within their community: Makeen Zachery, BC ’22; Hawa Sall, CC ’22; and Zoe Jackson, BC ’22, founded The Four Women Fund, a mutual aid fund designed to support Black womxn in financial need.

The Four Women Fund was created as protests erupted across the country following the murder of George Floyd. Since its creation, The Four Women Fund has raised over $20,000 and supported nearly 60 womxn. The fund is meant to help offset the effects of the COVID-19 pandemic that disproportionately affect Black womxn in the United States. Microgrants average at $300 per recipient.

According to Zachery, the resurgence of this past summer’s Black Lives Matter protests played a critical role in the creation of the fund.

“[The Four Women Fund] was created in the wake of George Floyd’s murder, in that time where the Internet decided to embrace racial justice for a little bit,” she said. “We were talking as friends and we thought, ‘What could we do?’ especially being in peculiar positions regarding protests, not wanting to expose our family members but still wanting to be involved. What we thought we could do is just give money to Black womxn.”

The fund is an extension of Blk Girl Community, an online platform created by Zachery in 2014 to allow Black womxn to engage in conversations and create a community within a safe space. According to Zachery, the fund has transformed the platform from a place “where people can seek refuge, but also a place that isn’t solely just conversations but is giving tangible help.”

According to Zachery, being a part of “the Columbia bubble” can often mean losing sight of struggles that are taking place beyond the insular Columbia community. However, the privileges that come with being a student at the University can be utilized to create resources like The Four Women Fund.

“This difficult moment has reminded us that struggle can show up in any of our lives and, as a result, it certainly felt like a responsibility for us to leverage the resources and access that exists around us in our peers at Columbia and the institution itself to help those in need,” Zachery said.

Black women are disproportionately affected by the COVID-19 pandemic, both economically and medically; they are more likely to work frontline jobs and are historically subject to higher rates of medical racism and unequal care in the American health care system.

According to a recent study, the unemployment rate for Black womexn has increased as a result of the pandemic from 5.3 percent to 16.9 percent. About 84 percent of the womxn receiving the fund’s microgrants are unemployed.

“[Black womxn] are the first ones that lose their jobs, that are going to be evicted, they are being disregarded by health care and all these confounding elements lead us to a place where we are rendered invisible by the powers that exist and not only is this country failing everyone, but when it comes to Black womxn, it is particularly failing us,” Zachary said.

The fund’s board uses a ranking system to determine which applicants they will support and in what order. Evaluated criteria includes housing insecurity, unemployment, access to food and medicine, and the amount of dependents the womxn has in their care. Many of the profiles evaluated belong to womxn who are struggling economically as a result of the pandemic.

When describing a former application, Zachary described the necessity of this fund: “This is a woman struggling with house insecurity, food insecurity and who has children that are relying on her, and is unemployed because of the pandemic and she is looking to give her children a childhood that just does not harm them. … These are people that are trying to survive,”

The only source of funding for these microgrants is donations through the fund’s website. According to Zachery, the fund’s board has sometimes been met with reluctance from potential donors because of uncertainty around how the funds are distributed.

“There is this stigma of people thinking ‘What if we give our money to poor people who spend it on something that they don’t need?’ But everyone that applied just says ‘I just want food for my kid’ or ‘I just want to know that I have my rent covered next month,” Zachery said.

For the sake of privacy, the board does not ask the awardees to share how they are going to use the money from the microgrants, but it has been able to evaluate the fund’s impact in some of the responses from awardees.

The fund has been able to extend to large donors beyond the board member’s network. But Jackson emphasized that any and all donations are valued.

“We’ve actually gotten some donations from celebrities—and prominent folks in social justice circles”, said Jackson. “We’ve had people donate as little as five dollars, but the notes that they add are so kind that it can be really meaningful, and even more [so] than a 100 dollar donation.”

The name of the fund was inspired by Nina Simone’s song “Four Women,” a track in which the jazz singer describes four Black women with different backgrounds.

“We thought it’d be a great idea or representation of what we were going to do with the fund because we were helping womxn from all sorts of backgrounds, needs, lives and identities—and this idea of four women really stuck with us,” said Jackson. “And in our logo, we used the images of four women we found very inspiring as well.”

Though the fund’s founding members are grateful for the means to organize for the benefit of Black womxn, they believe their role is the result of larger systemic failures.

“We are both glad and hopeful that we can help them, but it’s also kind of sad and very depressing to know that all these people are in need because the system failed them and it really shouldn’t be on us to help them,” says Zachery. “There’s a feeling of ‘This is someone that could be my family, someone that I could know,’ and I think that’s been motivating us and it will stick with us, even when we are done.”