As reopening approaches, residents come together to address safety concerns in Montefiore Square

As reopening approaches, residents come together to address safety concerns in Montefiore Square 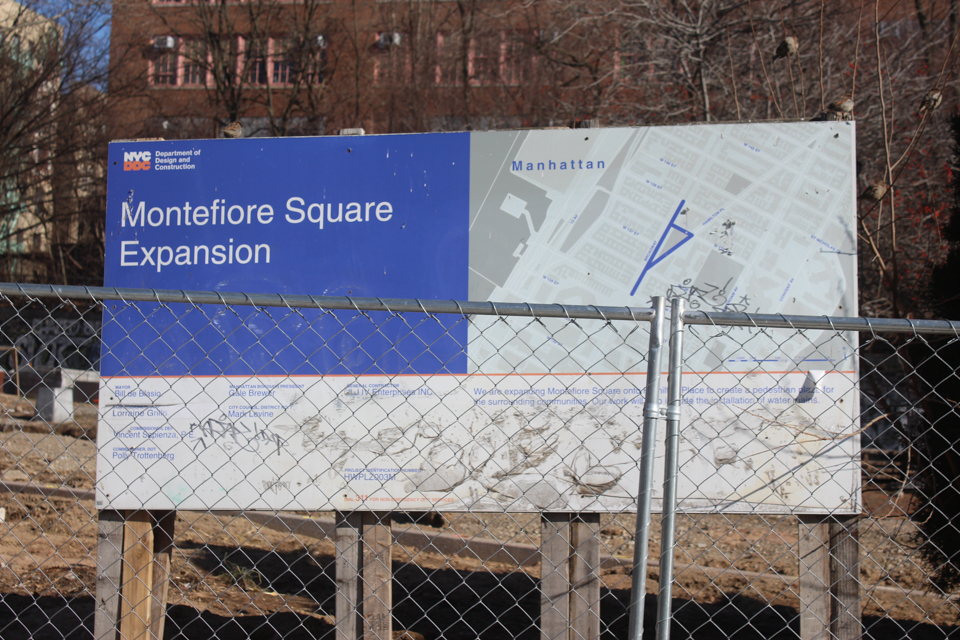 Nestled in Hamilton Heights between West 138th Street and Broadway, Montefiore Square was once a small, lively park that served as a center for community involvement. But as benches were removed and its grassy interior was gated in the 1990s to prevent drug dealing, community members noted that it was more difficult to use and enjoy the park to its fullest extent. Renovation plans, announced in 2019, seemed to offer promise for residents hoping to take advantage of the park.

But as the reopening of Montefiore Square approaches, community members have raised concerns about the recent spikes in drug dealing and unlicensed vending in the area, believing that such activity undermines their vision of the park as an amenity for the community. Residents have expressed hope for collaboration with both the New York Police Department and social service organizations, and their demands have revitalized conversations about how to best address safety concerns in public spaces.

The redesign of Montefiore Square was initiated with the aim of making the space more open and inviting after it became more of a gated corridor than a usable park following the changes made in the ’90s.

“What [the park] really became was a pedestrian corridor for City College students to get from the subway up to City College. In other words, people really couldn’t use it, you really couldn’t be on the grass,” Michael Palma Mir, co-leader of the Montefiore Park Neighborhood Association, said.

While the local safety concerns predate the pandemic itself, community members have reported a recent increase in drug dealing over the past year, which has made some local residents feel unsafe.

Another recent concern has been the unlicensed vending that often takes place in the area. Many of these unlicensed vendors sell secondhand clothes and objects near Montefiore Square. Palma Mir said he has observed some vendors who steal items from the Duane Reade on the Upper West Side and then sell these stolen goods in the streets near the park. But some residents note that the increase in vending may be a response to financial difficulties caused by the economic downturn that was spurred by the COVID-19 pandemic.

“[The neighborhood] had a lot of people who became unemployed. We got a lot of people who, to supplement their income, started street vending. We had a lot of people who were already in a precarious situation and then the bottom fell out. So that’s historically been the case but then the manmade economic crisis exacerbated [it],” Anthony Carrion, co-chair of the Community Board 9 Landmarks Preservation and Parks subcommittee, said. Community Board 9 is a local advisory board that represents Morningside Heights, West Harlem, and the surrounding communities.

Though residents express sympathy for the community members who have had to turn to unlicensed vending amid the economic fallout of the pandemic, they are simultaneously wary that the rise of these vending services will turn the park into a commercial area.

In anticipation of the reopening of the park this summer, Palma Mir and other residents are attempting to address the local drug dealing, unlicensed vending, and safety concerns in order to ensure that the newly constructed outdoor space is able to serve as an amenity for the community and not as a commercial zone for drug dealing and vending.

The efforts of residents to address these safety concerns include varying approaches to the issue. At the February meeting of CB9′s Landmarks Preservation and Parks subcommittee, officers from the NYPD’s 30th Precinct were present and stated their intentions to increase the police presence at the park as the reopening approaches.

One attendee of the meeting, Shannon Richards, asserted his belief in the importance of the police’s involvement in this issue and raised the question of how the community can properly document and report the safety concerns that they are seeing.

“I don’t question that policing presence doesn’t always have to be synonymous with enforcement. In fact, with all due respect, being a Black man in America, my experience is not like many other Black men in America. Most of my experiences with law enforcement have not been about enforcement; it’s been about engagement and safety and community involvement,” Richards said during the meeting.

Though police presence in the lead-up to the park’s reopening is largely seen as necessary, residents also feel that policing cannot be the entire solution to the problem.

“Everybody has an understanding that it’s not just about policing and about monitoring the site. It’s also about providing services. It has to be multi-pronged to the best of our abilities because it’s 2021—we know not to repeat the drug wars from the ’60s, ’70s, and ’80s. We don’t deal with it that way,” Carrion said.

[Related: An unthinkable tragedy struck Barnard and its surrounding community. A year later, what has changed?]

For community members, a major aspect of this multi-pronged approach is the cooperation of other city agencies in addressing the problem. In the 1990s, a coalition of city agencies worked to combat drug dealing in the neighborhood and eventually helped to push the activity out of Montefiore Square. Now, as drug dealing in the area once again heightens, residents hope to draw upon this cooperative, multi-agency model from before.

“We need the involvement of all of the relevant city agencies because the problem is not simply one of policing. It’s also a question of folks who have substance abuse problems or mental health issues. It’s a question of sanitation and keeping the neighborhood clean,” Brett Dakin, the founder of Friends of Jacob Schiff Park, said.

Residents especially emphasize the importance of providing social services, specifically mental illness and addiction services, to those in the area who need them. Marti Cummings, a CB9 board member, engages in homeless outreach near Montefiore Square, where they directly interact with people experiencing housing and food insecurity. Cummings believes that funding and providing social services for these local residents is a key component of addressing this issue.

“It’s about having those conversations and not just sweeping things under the rug but really addressing the issues head-on and saying, ‘If we want to have our streets safe, that doesn’t always mean going right to the police. It also means putting funding into our community, into our education programs, into harm-reduction services, and working with organizations in the district that do harm reduction,” Cummings said.

Going forward, Palma Mir and other neighborhood volunteers hope to draw from past solutions and address these local safety concerns using the multi-agency coalition approach. Palma Mir recalled how in the 1990s, the city’s administration proactively engaged in a concerted effort to get the relevant city agencies to work with communities in need. The current city administration, however, does not have such a program where these agencies can meet with communities to address local issues. Now, as community members begin to reach out to city agencies for help with the safety concerns at Montefiore Square, they face a greater challenge than before.

“This administration doesn’t seem to value that cooperation with community stakeholders. They’re not coming out and saying, ‘Hey, how can we help you?’ We have to go to them and say, ‘Can you help us?’ And even then, it’s like pulling teeth,” Palma Mir said.

Though the concerns of safety and drug dealing have recently increased, they have long existed within the area. When looking at the long history of this issue, Carrion references the nationwide ties between drug use and mental health. He believes that the larger, more systemic issue at play within these recent safety concerns is poverty.

“None of these problems would exist if you had, from the outset, a decent school system, if you had fully funded and all kinds of extracurriculars and employment opportunities,” Carrion said. “The issue is that you have to eradicate poverty. Eradicating poverty has to be the central issue because that is the worst form of violence, and everything else that you see is just kind of repercussions of that.”