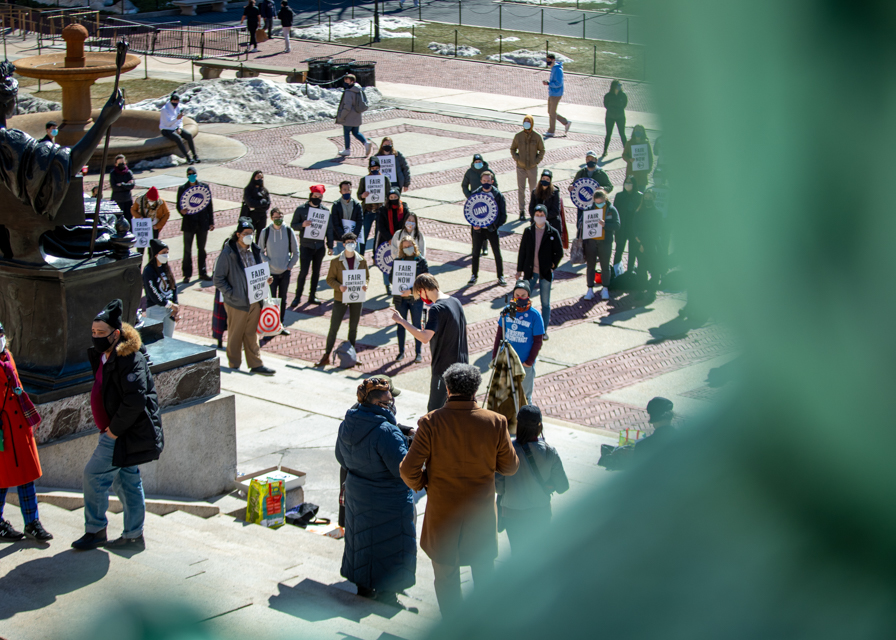 According to GWC-UAW bargaining committee members, the strike is a last resort after years of unsuccessful negotiations with University representatives.

Columbia and the Graduate Workers of Columbia-United Auto Workers are racing to reach an agreement ahead of the March 15 strike deadline. Major last-minute revisions have brought the University and graduate student union closer to negotiating the first graduate student labor contract at Columbia, but both parties remain at a standstill on key issues.

Last March, student-workers of GWC-UAW voted 1,833 to 77 to allow bargaining committee members to authorize the strike if they deemed it necessary. After 65 bargaining sessions and the second anniversary of initial bargaining proceedings on Feb. 25, graduate students and undergraduate teaching assistants have grown tired of waiting for change. According to GWC-UAW bargaining committee members, the strike is a last resort after years of unsuccessful negotiations with University representatives. They maintain that withholding work is their last remaining tool for pressuring the University to listen to their demands.

The likelihood of the upcoming strike loomed over the most recent bargaining session on Tuesday. The University team, made up of deans, administrators, and outside counsel Bernard Plum, announced to the GWC-UAW bargaining committee that student-workers will not be paid for the duration of a strike. GWC bargaining members presented six new proposals during Tuesday’s session—each of which was rejected—on crucial issues including union recognition, compensation, nondiscrimination, and union security.

Student-workers have already begun preparing their classes and labs for the possibility of a strike, which will have no definite end date. Sinéad Carolan, a third-year Ph.D. student in the political science department, teaches two discussion sections a week and grades student papers. She let her students know on Tuesday about her intention to strike.

“A couple of them messaged me in the Zoom chat and were like, ‘Let us know if there’s anything we can do,’” Carolan said. “Especially because the undergrads have also had their own tuition strike and their own complaints of the University this year, I think there’s a lot of understanding among the undergraduate student body.”

Interim Provost Ira Katznelson denounced the union’s intention to strike in an email to the Columbia community on Monday, claiming it would be an additional disruption amid a year of unprecedented upheaval. He added his personal objection as a one-time political strategist for the United Auto Workers. Union member Josie Brown among other supporters sent emails to students in response to Katznelson, claiming that Katznelson’s email was “misleading.”

“We need to be mindful of the price of a stoppage, not least for the thousands of students who have been grappling with non-traditional education via Zoom and hybrid classes,” Katznelson wrote. “Teaching, including work by TAs, has been remarkably effective, sometimes heroic. It would be disruptive to curtail key features of pedagogy at this particular moment.”

Katznelson compared GWC-UAW negotiations to bargaining with the Columbia Postdoctoral Workers-UAW, who achieved a bargaining agreement last year and became the first postdoctoral union at a private university in the United States. The postdoctoral students won substantially higher minimum salaries after they found that Columbia’s compensation of postdoctoral students was “under market” compared to its peer institutions. Katznelson wrote that GWC-UAW’s compensation proposal, which includes increasing compensation by 10 percent with 6 percent improvements in subsequent years, has no comparable basis.

“By contrast, current graduate student stipends in comparison to our peers are at the high end, and we are proud of that position,” Katznelson wrote. “In other words, with regard to compensation, we are at a different starting point in the current negotiation than we were with the postdocs, but for both groups Columbia strives to ensure that the intellectual and economic opportunities of studying and working at Columbia are compelling.”

In response, GWC-UAW members pointed to New York University, where funded Ph.D. workers receive higher compensation. They also argue that Columbia is unwilling to extend other rights achieved by postdoctoral workers, which makes the University’s comparison between GWC-UAW and the postdoctoral union inconsistent.

“The University team has stonewalled negotiations, stating there will be no further discussion on specific topics such as allowing access to grievance and neutral arbitration to enforce non-discrimination and harassment protections, and establishing a union shop—both provisions they agreed to in the Columbia Postdoctoral Workers contract that Provost Katznelson lauded in his statement,” the GWC-UAW bargaining committee wrote in a statement to Spectator.

There is one bargaining session left before the strike, and the University team has indicated hesitation at the prospect of setting up more meetings. The University team claimed that it has already proposed what it considers “3 a.m. on March 15” proposals, claiming these will be its largest and final proposals. GWC-UAW has invited Katznelson to the last bargaining session in the hope that they can reach an agreement.

Ten topics are still considered open articles and must be successfully negotiated to reach a contract. The largest issue complicating negotiations is economic, as both sides are stalled on issues of fees and waivers, appointment guarantees, compensation and payroll, and health benefits. The University team has accused GWC-UAW bargaining members of not recognizing Columbia’s financial strain during the pandemic––including a $700 million budget drop––while GWC-UAW points to pandemic-era federal funding that the University has received and high administrator salaries to question the University’s claims of financial strain.

“Collective bargaining is an iterative process,” Katznelson wrote. “No single round can produce optimal results. This is especially so during the pandemic, which has placed Columbia, and higher education more generally, under great fiscal strain, with responses that have included wage and hiring freezes.”

Bargaining committee members say that the University should express more interest in negotiating some of their non-economic proposals, like language to protect against power-based harassment and appeal findings of internal discrimination cases to grievance and arbitration.

“Their positions on non-economic issues reflect an unwillingness to reconsider current practices in a way that relinquishes any power, and an inability to recognize our need for protections that come at minimal, if any, cost to the University,” the GWC-UAW bargaining committee said.

Just before Tuesday’s bargaining session, the union published in-person and virtual picketing schedules. If an agreement is not met, student-workers plan to picket at Columbia every day next week between 10 a.m. and 2 p.m. Virtual demonstrators will send phone zaps to Columbia and politicians, participate in teach-ins, and attend live-streamed rallies.

If the strike begins, Tiana Reid, a seventh-year Ph.D. candidate in the English and comparative literature department, is planning to stop teaching her Literature Humanities class. Reid participated in GWC-UAW’s week-long 2018 strike that called for the start of bargaining and has been sharing her experiences with union members to talk about any upcoming strike concerns. She said the challenges caused by the pandemic could make a strike more disruptive and could put more pressure on the University to make changes than the 2018 strike.

“We might even have a stronger picket because so many people have been forced to be inside,” Reid said. “We saw this last summer with the protests around the country. There were so many people outside because we had been so stifled by our living conditions.”

Both sides are eager to end this lengthy bargaining period and bring negotiations to a conclusion. Whether or not it takes a strike to reach that first labor contract will be determined in the coming days.

“It has been two years, and we have engaged in this long, drawn-out negotiation process,” Carolan said. “We’re not willing to just kick the can down the road anymore, and I think that’s the signal that we’re trying to send.”