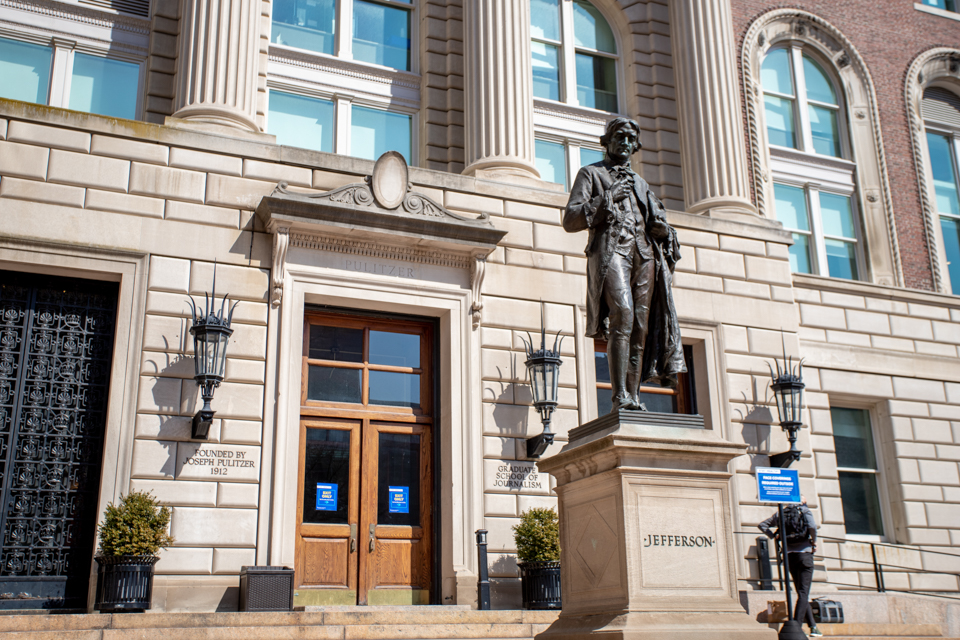 Of the 14,000 arrests made at the Black Lives Matter protests last summer, 56 were journalists.

“It’s the type of relief I can’t even explain,” said Andrea Sahouri, Journalism ’19, following her acquittal.

The ruling followed a three-day trial that gained national attention for what many deemed an assault on press freedom.

Sahouri, a breaking news reporter for the Des Moines Register, was arrested in May 2020 while covering protests in response to the murder of George Floyd. After identifying herself as press numerous times, she was pepper sprayed and zip-tied by Des Moines Police Department officer Luke Wilson. She was charged on two counts of failure to disperse and obstruction of official acts. In October, 250 affiliates of the Journalism School signed a letter calling for prosecutors to drop all charges against her.

Of the 14,000 arrests made at the Black Lives Matter protests last summer, 56 were journalists. Yet by the time of Sahouri’s trial, just seven reporters still faced prosecution. Her case has received condemnation from a number of high-profile human rights organizations, including Amnesty International. As a Palestinian-American, Sahouri believes her race played a role in Polk County’s decision to prosecute, as other white press corps members nearby, including members of the KKCI TV station team who captured the footage used as a key exhibit in the trial, were not detained.

Polk, the largest and most reliably Democratic-voting county in a state rapidly shifting to the right, is facing calls from the American Civil Liberties Union of Iowa to undergo a review of the decision to pursue the charges against Sahouri. The tenure of John Sarcone, the county prosecutor, has emerged as a locus of political tension in Iowa. He has run unopposed as the Democratic candidate for all his 30 years in office.

Carol Hunter, the executive editor of the Register and a witness in Sahouri’s trial, wrote on Sarcone’s history of dismissal of law enforcement bias in a 2018 editorial. When Iowa’s incarceration of Black citizens at a higher rate than a majority of other states was pointed out to Sarcone, she noted that he responded, “Guess what? They are committing the crimes.”

Sahouri’s portfolio at the Register includes investigations into the lack of DMPD transparency regarding citizen complaints against officers. Over half of the settlements paid by the city have been paid for officers with repeat offenses of excessive force. This issue has been exacerbated by a lack of public data because Iowa law shields police misconduct from public eyes and gives special defense privileges to accused officers. The Iowa Senate voted this month to expand those rights, pushing legislation that would widen the conditions for police officers’ immunity from lawsuits.

The DMPD has yet to review another incident of journalist assault in which Iowa Capital Dispatch reporter Katie Akin was also pepper-sprayed at the Floyd protests after identifying herself as press 17 times in about 30 seconds.

Bruce Shapiro, the executive director of Columbia’s Dart Center for Trauma and Journalism, notes that Sahouri’s arrest is a troublesome continuation of the shift in American politics that has brought a global pattern of decimated press freedom to domestic newsrooms. Shapiro says that Trump in particular has made it an “open season on journalists in the United States.”

“We think of reporters in the national spotlight being subject to harassment, or war reporters being in physical danger, but when you have a young local reporter at the Des Moines Register facing arrest while covering a protest; when you have reporters at the Annapolis Gazette murdered in their own newsroom; and when you have all kinds of attacks on the press being central to the country’s politics in the last four years, that really challenged the way American journalists think about themselves,” Shapiro said.

The Dart Center physical safety advice includes writing one’s blood type and the number for a newsroom lawyer on the inside of the wrist; wearing flak jackets to avoid stray rubber bullets; and not wearing black clothing that may be mistaken for a protestor’s.

Shapiro and his colleagues at the Dart Center have conducted over 100 trainings in newsrooms across the country regarding strategies for building journalists’ resilience and threat assessment skills in the face of the unprecedented stresses of the past year.

“A journalist who can no longer report because she’s injured or … disabled by post-traumatic stress disorder is censored as effectively as a journalist who’s put in jail,” Shapiro said. “So if we take press freedoms, the search for accountability, and the search for better journalism seriously, we need to take seriously the safety and resilience of those professionals.”

The question of the best practices required for protest coverage was underscored during Sahouri’s trial, as both courtroom and public debate unfolded concerning why she did not have a press badge on at the time of her arrest. She attests that this was because the Register was in the process of acquiring one for her and there was conflicting advice on whether openly wearing press identification may attract unwanted attention.

Shapiro sees the rise of serious questions of physical and online safety not just for large legacy publications, but for small, local newspapers as a disturbing trend.

“For about 20 years, news organizations would send reporters to conflict and crisis areas overseas and train reporters in first aid and other kinds of safety and threat assessment strategies,” Shapiro said. “This is the first year that a lot of American news organizations have had to wake up and recognize that there are actual, real threats to local reporters in the United States, the bastion of press freedom, and that part of being a responsible newsroom and a responsible employer is providing some baseline training.

Overseas, steep declines in media freedom have encroached beyond authoritarian states to include swaths of liberal democracies. Freedom House, the non-governmental organization of record regarding the classification of states to regime types, reported that 19 percent of its countries with “free” status underwent declines in press freedoms in the last five years.

Discussion about the assassination and dismemberment of Washington Post journalist Jamal Khashoggi in a Turkish embassy in 2018 has reemerged under President Joe Biden as a test of the administration’s goal to center human rights in the American foreign policy agenda. While the recent declassification of an intelligence report was an official acknowledgment that Saudi Arabia’s Crown Prince Mohammed bin Salman was behind the attack, many critics still decry the lack of accountability for the American ally as a failure to defend free speech.

In cases like Sahouri’s and Khashoggi’s, Bruce believes that the end goal goes beyond the silencing of one particular journalist or dissident. The Internet and proliferation of social media have enabled corrupt, violent, and authoritarian actors to circumvent traditional media.

“Everybody needed the reporter … because everybody needed to get their story out,” Shapiro said. “The only real value of journalists in that equation is as someone to be kidnapped to raise money through ransom, but more often as with Jamal Khashoggi, as a corpse to spread fear and terror.”

Despite the erosion of free speech at a global scale and her 10-month ordeal, Sahouri sees her verdict as an important refutation of an unjust arrest.

“They made the decision to uphold democracy, a just democracy, the freedom of the press, First Amendment rights, the list goes on,” she said.

Shapiro remains steadfast in his belief in the press’s power, but cautions that iterations of Sahouri’s case are an evergreen possibility.

“Whether it’s COVID-19, institutional racism, economic inequity, all the roil of political polarization—journalism and reporting actually are a crucial part of the pathway forward,” Shapiro said. “We don’t know how the story will play out in the courtroom or in the street or online, but we know that in each of those venues, it will play out in ways that put high demands on journalists and may lead to repetition of threats and dangers.”