Over 60,000 students applied to Columbia this year. Will the 51 percent spike decrease the achievement gap?

Over 60,000 students applied to Columbia this year. Will the 51 percent spike decrease the achievement gap? 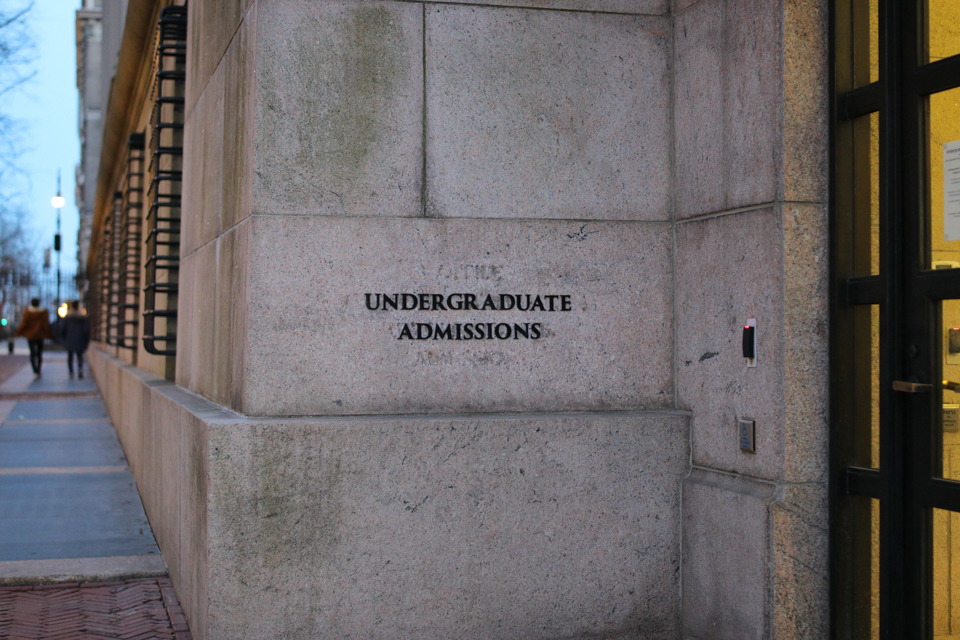 Every year in late March, all eight Ivy League universities simultaneously release undergraduate admissions decisions to tens of thousands of eagerly waiting high school seniors. For many, Ivy Day—as it has been dubbed by the admissions community—represents the end of a long, stressful, and taxing application process. With a single click, students’ dreams of attending the Ancient Eight either come true or are shattered.

However, this year, Ivy Day was moved from its traditional late March date to April 6 due to a spike in applications across the Ivy League. Columbia College and the School of Engineering and Applied Science announced a 51 percent increase in applications received during the 2020-21 admissions cycle on Wednesday, having received over 60,000 applications compared to 40,084 the previous year. The effects of this spike on the achievement gap, a pervasive issue in American education whereby first-generation, low-income, and underrepresented students are systemically left out of elite institutions, is yet to be determined.

Jessica Marinaccio, the dean of Undergraduate Admissions and Financial Aid, cites “the appeal of Columbia’s generous financial aid program and the unexpected benefit of moving to all-virtual admissions outreach” as the catalyst for the surge, along with Columbia’s one-year test-optional policy that did not require applicants to submit SAT or ACT scores with their applications.

The rise in applications seen at Columbia is paralleled at other elite institutions like Harvard University, Penn State University’s primary campus, and Colgate University. According to Christine Chu, a former assistant director of undergraduate admissions at Yale University and Georgetown University, this widespread spike is the result of not just test-optional policies, but “uncertainties generated by the pandemic” that may have pushed students to apply to more colleges than they would in a normal year.

Recent years have seen national discussions regarding the accessibility of elite college admissions. In 2014, the organization Students for Fair Admissions sued Harvard for racial discrimination against Asian applicants. Although the judge ultimately ruled in favor of Harvard, the lawsuit exposed the secretive inner workings of elite college admissions offices and opened a national discourse surrounding holistic admissions. In 2019, several of Columbia’s peer institutions were implicated in an investigation known as Operation Varsity Blues that exposed fraudulent admissions practices involving hundreds of thousands of dollars in bribes to admissions officials.

Some, like Sindy Lopez, an analyst at the research nonprofit Ithaka S+R, hope the new test-optional policy will increase the representation of marginalized applicants, particularly because evidence suggests that standardized tests systematically discriminate against poorer applicants and applicants of color. Lopez studies low-income students’ access to higher education.

“I think the research would agree that socioeconomic status is definitely something that’s correlated to your SAT and ACT scores, so wealthier students will definitely have advantages in terms of increased test preparation—multiple sittings on exams, for example, which isn’t something that lower-income students have access to,” Lopez said.

These discrepancies can have major impacts on student body demographics, especially at institutions like Columbia. Davis Jenkins, a senior research scholar at the Community College Research Center and a research professor in the education policy and social analysis department at Teachers College, believes that standardized testing requirements impede low-income students’ access to elite universities.

“Selective institutions, although there’s been some effort, have really had problems recruiting students from low-income backgrounds,” Jenkins said. “A big reason for this is these admissions tests like SAT and ACT, which are better measures, I think, of race and socioeconomic status than anything that is a valid indicator of one’s readiness for college.”

While the change in testing requirements might positively serve some underrepresented students, Aaron Pallas, the chair of the social analysis department at Teachers College, doubts that going test-optional will have any major impact on the demographics of the class of 2025.

“It’s also the case that many schools have developed durable relationships with particular high schools where they’ve seen that these particular high schools send them students who are successful, so it’s very likely they’ll continue to rely on those kinds of signals of student quality,” Pallas said. “I would not expect to see the relaxing of the entrance exams having a major shift in who winds up getting admitted.”

Christopher Nuñez, CC ’24, is familiar with the additional stresses that standardized tests can add to the college application process. Nuñez, a QuestBridge Scholar and Gates Scholar, is a first-generation college student. He found that a lack of information and resources surrounding standardized tests increased the pressure he placed on himself in high school dramatically.

“When you start comparing yourself to someone who’s had this private tutor for five days a week for an hour, and you’re just doing practice problems on Khan Academy, and you start directly comparing yourself to them, I think it’s harmful for yourself because you start to think of yourself as lesser, even though, at that point, it’s just a difference in resources,” Nuñez said.

Experts believe that Columbia’s decision to go test-optional incentivized underrepresented students to apply this year. According to Lopez, research conducted prior to the pandemic indicated that after adopting a test-optional policy, institutions saw incremental increases in applications from underrepresented or low-income students.

However, even though these tests could lead more underrepresented students to apply, these students also belong to demographic groups that have been disproportionately affected by the pandemic. Jenkins worries that even if more of these students apply and are accepted to elite colleges, economic factors may influence their decision to matriculate.

“My concern is that these students and their families who come from low-income backgrounds have been disproportionately hurt by the pandemic, and I’m concerned about the ability of these students, even with financial aid … to come, even if they have a full ride at Columbia or other selective colleges, in part because people are just having to find work just to make ends meet,” Jenkins said.

Nationwide, college tuition has risen faster than the national median income over the past 15 years, and Columbia, which has faster-than-average tuition growth, now claims the highest cost of attendance of any college in the United States. As tuition rates have increased, socioeconomic diversity at Columbia has stagnated in the past 10 years, and fewer Columbia undergraduates receive financial aid today than they did 30 years ago. Columbia, which has a smaller endowment than its peer universities, is more tuition-reliant when it comes to funding its operating budget. This reliance on students who pay full tuition, especially in conjunction with the University’s expensive large-scale expansion project in Manhattanville, has driven the increased cost of attendance, leading to outcry among the student body.

Further, elite colleges with massive price tags have much to gain from appearing selective and drawing “better” students than their peers, thus allowing them to charge more for what appears to be a superior education. Pallas believes this competition drives the use of standardized tests as admissions criteria.

“In practice, these scores are often used to demonstrate an institution’s ability to select high-achieving students,” Pallas said. “There’s a very competitive ranking system out there in which institutions are competing against one another to try to attract the best students. They use things like SAT scores or ACT scores or being in the top 10 percent of the high school class as rough indicators of their selectivity.”

As the allure of an Ivy League degree has increased and acceptance-rates have plummeted, the college admissions process has become a big business. Chu currently works as a Premier College Counselor at IvyWise, a New York-based admissions consulting firm. Although IvyWise offers pro bono counseling services for students with financial need, the market price for the firm’s junior counselors starts at $1,000 per hour.

Companies like IvyWise can increase the competitive edge of wealthier students who have the means to pay for their services prior to applying to colleges. Even though elite institutions claim to exercise holistic admissions processes, it is easy—and common—for the wealthy to gain an admissions advantage.

“There’s no scientific basis on which to use tests. You’re not supposed to be able to study for the SAT. … My buddy from Princeton started the Princeton Review because he recognized it’s a game,” Jenkins said. “Wealthy privileged people like me can send Olive, my daughter, to the Princeton Review [or] Kaplan to get better at the tricks.”

Private firms aren’t the only entities profiting from these systems. The nonprofits that administer the standardized tests themselves are billion-dollar companies that benefit financially from test-mandatory admissions policies.

“CollegeBoard and ACT, especially CollegeBoard, have huge lobbying efforts with state legislators and others. They’re a big business and they’ve become very politically powerful, but it’s had a very deleterious effect on low-income students,” Jenkins said.

Despite the fact that standardized tests are no longer explicitly required, Columbia Undergraduate Admissions still “encourage[s]” applicants to submit them because it “believe[s] this information can be a valuable addition in [its] review process.” Based on data from past admissions cycles, admissions experts believe that students who decide to include their test scores in their applications to test-optional schools have a far greater chance of being admitted than applicants who do not include test scores.

Proponents of more diverse admissions processes posit that the switch to a test-optional model is only the beginning. In order to close the achievement gap present in elite academia, they argue that outreach is essential.

“If we approach this a little bit more humbly, I think we will get a better outcome,” Jenkins said. “It isn’t just by going test-optional. … That’s not enough. We’re going to have to really actively outreach and work with low-income students and families in middle school and high school.”

While the demographics of the class of 2025 are yet to be determined, they could provide support for a restructuring of the admissions process.

“I do think it’s an opportunity for institutions to take a look at their admissions mechanisms, and selective institutions could learn that they don’t need entrance exam scores to be able to enroll students who excel and who do really well and to have a diverse class,” Pallas said.

This year, despite the ongoing pandemic and recession swirling around them, 60,000 applicants are preparing to click the link to their futures. Whether these decisions represent true merit or will continue to bow to systemic inequities is yet to be seen.