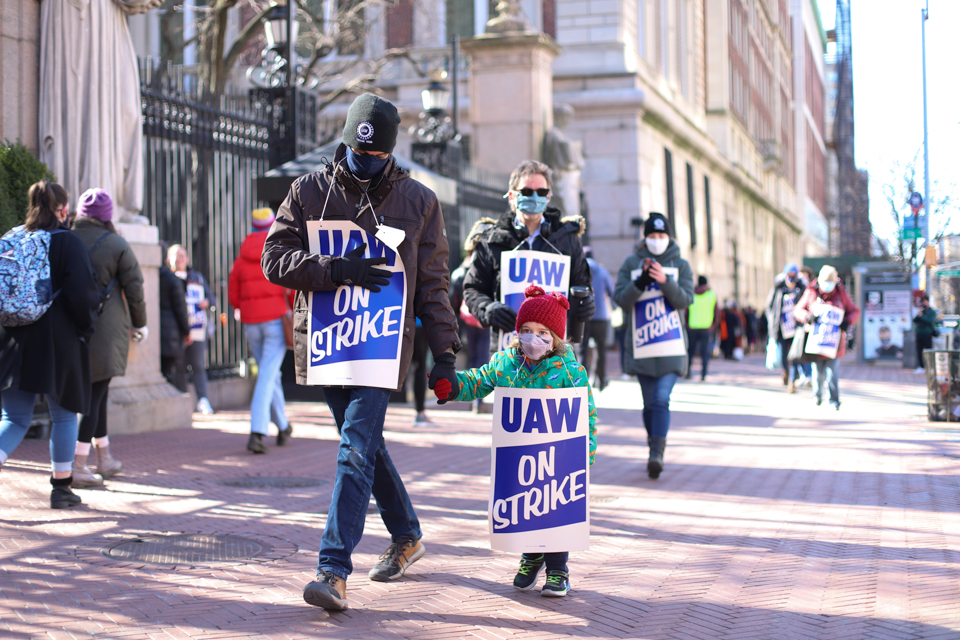 Across work sectors, a quarter of women who became unemployed over the course of the pandemic credited it to a lack of childcare.

Columbia and the Graduate Workers of Columbia-United Auto Workers have spent the past two years at the bargaining table, negotiating issues of compensation, neutral arbitration, childcare benefits, and more. As of Monday, over 3,000 GWC-UAW student workers are officially on strike until a labor contract can be agreed upon between the union and the University. Among the 23 tentative agreements already reached between Columbia and the GWC-UAW is one on how the university will subsidize and support caregivers.

As a result of the pandemic, the previously $2,000 parental subsidy was temporarily raised to $4,000 for the 2020-2021 academic year. Thanks to recent bargaining developments, the GWC-UAW has been able to permanently raise the figure to $4,000. This subsidy ends once a child reaches the age of five under the assumption that elementary school can take over as a parent’s main source of childcare. The GWC-UAW has estimated that around 200 parents will be eligible for this subsidy.

Additional strain has been placed on female graduate students during the pandemic as women often bear the role of primary caregiver. According to a survey by the University of Utah, 28 percent of women reported working less than usual in lockdown as opposed to only 19 percent of men. Women are also 40 percent more likely than men to report that childcare negatively impacted their careers. This decrease in labor capacity due to caregiving has affected Columbia faculty, graduate students, and researchers, creating an additional obstacle to professional growth and advancement. The union’s childcare demands highlighted a long present discrepancy in the resources available to University employees caring for children, one that has been exacerbated by the pandemic.

Departments are now also required to take caretaking scheduling requests into consideration. Anna Waller is a fifth-year doctoral student in the department of theatre and performance and is in charge of researching and bargaining for childcare on behalf of the GWC-UAW.

“You would think people would naturally [schedule around parents] and support parents, but this is just not the case in academia. Academia is more or less openly hostile to parents,” Waller said. “Sometimes when you don’t have a supportive department, you end up in a position where you have to pay for childcare.”

The GWC-UAW also reached other agreements, including a $5,000 reimbursements for expenses related to adoption and access to back-up care programs. These programs include Bright Horizons, which provides short-term care both nationwide and internationally when normal caregiving plans are interrupted.

Many of the GWC-UAW’s other requests were forgone in order to narrow in on its main goal of raising parental subsidization. The union originally asked for an age cap greater than five years old and accessible on-campus childcare. Despite the University’s failure to recognize all of the GWC-UAW’s original requests, Waller still feels like they earned substantial caretaking benefits.

“The University said they gave us more than they ever thought they would because this is an economic ask,” Waller said. “Of course, this is our first contract. Perhaps in three years, although the time is not set yet, we will negotiate another [contract]. It’s possible in the future we will be able to increase benefits.”

According to the Centers for Disease Control and Prevention, two out of every three caregivers are women. Caregiving responsibilities can prove detrimental for female faculty on the tenure track, stunting opportunities for professional advancement. The tenure process and professional development in academia generally is heavily reliant on the amount of research that a candidate is able to produce.

While the pandemic has seen an uptick in journal submissions, studies have found that it has been male researchers who have experienced greater productivity. Female researchers, on the other hand, have been set back—in April and March 2020, women submitted fewer articles than they did during the same months in both 2018 and 2019. Across work sectors, a quarter of women who became unemployed over the course of the pandemic credited it to a lack of childcare. 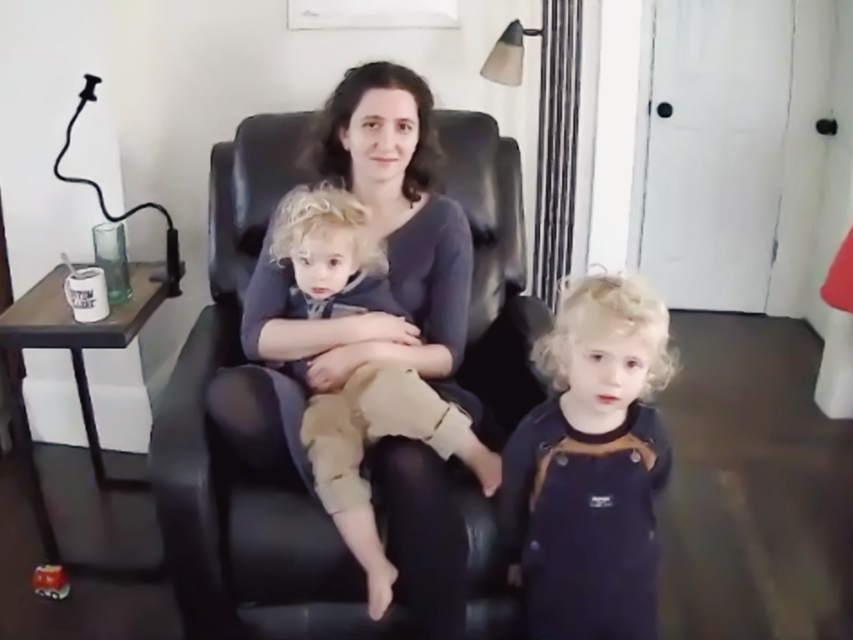 Gabi Levy
Robin Reich sits at home for a Zoom portrait with her two children.

Robin Reich is a sixth-year doctoral student in the department of history and a member of the GWC-UAW. She has two-year-old twins and has experienced firsthand the dual role of caregiver and academic.

Even though her husband works full time in the private sector, Reich struggled to fund her twins’ childcare before Columbia’s subsidy was raised. In the past, her entire salary went into paying for a nanny. Right now, she pays over $19,000 a year in childcare from a provider unaffiliated with Columbia, having been disappointed by the Columbia back-up care program, Bright Horizons.

“The service was somewhat helpful. It’s great in that it’s highly discounted temporary care,” Reich said. “There were a couple times they couldn’t find me anyone because it was last-minute or the person who was supposed to come had to cancel, and then I was out of luck.”

Reich pointed to a larger issue in academia wherein female faculty and caregivers struggle to reconcile the demands of professional growth with the demands of caring for the home and often feel that they must conceal or overlook their domestic obligations. In the first year after having her twins, Reich felt compelled to choose between her newborn children and her career after being unable to take her children to the United Kingdom where she was doing research.

“There’s no way to prove why in academia you haven’t gotten a job,” Reich said. “[It is] very easy for women to get discriminated against in hiring if they have children or are visibly pregnant when they’re on the job market.”

Postdoctoral researchers have the same $4,000 parental subsidy, which was passed in their own bargain with the university in June 2020. Among the postdoctoral parental provisions is also language about parental leave, which was negotiated up to 12 weeks for mothers and 6 weeks for male spouses. The University also gave the Columbia Postdoctoral Workers-United Auto Workers up to 10 days of reimbursement for crisis care.

Alice Sturm, CC ’10, is a first-year postdoctoral scholar in the department of ecology, evolution and environmental biology who has yet to use the University’s childcare resources for her 14-month-old daughter. While the pandemic has taken a toll on caregivers’ capacities to work, Sturm has been able to use this time to take on a full-time class load online while also caring for her daughter.

“I’ve been wanting to go back to school,” Sturm said. “The pandemic made me want to do it just because there were so many more high-quality education opportunities online, and it’s actually easier to balance classes [with a child] than with a full-time job.”

Melissa McKenzie is a fifth-year postdoctoral researcher in the department of systems biology and is the vice president of the Columbia Postdoctoral Workers. McKenzie’s daughter is seven, meaning she is ineligible for the $4,000 subsidy. As the vice president of CPW-UAW and a mother herself, McKenzie advocates for the university to take their fair share of the financial and time-restraint burden.

“People should be able to have their career and to have a family. I think universities, especially [as] an institute of higher learning, have a moral imperative [to support postdocs] who come into their workplace. … They’re not just cogs in a machine,” McKenzie said.

According to Waller, quality child care is a key component to creating more accessible higher education, as well as more representative bodies of work.

“The more time you can put into your academic work, the more you’re rewarded and the more you can move forward in the system,” Waller said. “But if you have caretaking responsibilities, you have to spend time taking care of your children. … If we want all kinds of people teaching, doing research, and creating knowledge, we are limiting that by not making education accessible to people with children and especially women with children. You don’t get their perspective.”