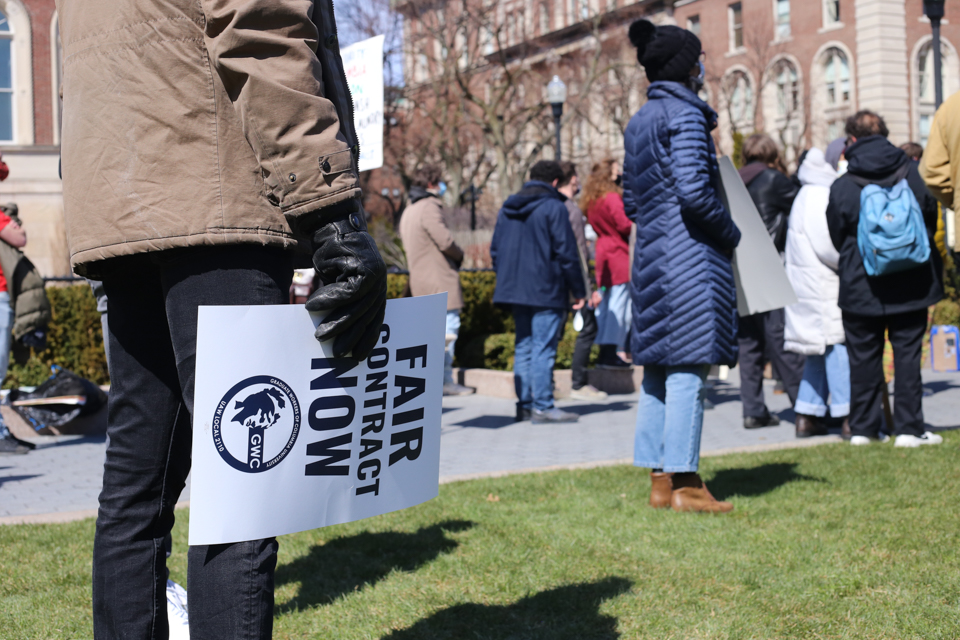 Within the first week of striking by Columbia student-workers for a fair contract, the New York University graduate workers union announced a vote to strike beginning March 23.

Similar to the GWC-UAW’s strike after two years of unsuccessful bargaining, the GSOC-UAW’s announcement follows the union’s nine months of bargaining with New York University. The GSOC-UAW claims that the university administration has refused to concede to many of its demands, including higher wages, expanded healthcare coverage, removal of the New York Police Department from NYU’s campus, and further protections for immigrant and international students. The union’s proposals follow months of membership phone banking, surveys, and town halls.

Amid the coronavirus pandemic, student-worker unions across the nation are beginning to authorize strikes. On Thursday, graduate student-workers at Illinois State University announced their own strike vote, inspired by the protest taking place at Columbia. The Harvard Graduate Students Union-United Automobile Workers has also begun bargaining negotiations for its second contract; it is one of five graduate student unions to have successfully negotiated a contract with its respective university.

“We were eager to see what NYU would bring to the table after our last session, where we presented a petition signed by 1,200 graduate workers in support of our demands. But after yet another disappointing meeting with NYU, we’re coming together to take action,” Arundhati Velamur, a GSOC-UAW bargaining committee member, said. “Our workers refuse the lack of response by NYU and are ready to strike if necessary.”

Like at Columbia, the graduate workers’ demands have been met with support from NYU undergraduates.

“As undergrads, we are appalled by the university’s treatment of grad workers, including our TAs,” Jake Colosa, an undergraduate member of the NYU chapter of the Young Democratic Socialists of America, said. “We know that graduate student working conditions are our learning conditions. Failing to pay grad workers a living wage and failing to guarantee a safe work environment is an attack on the entire NYU community, students and workers alike.”

In order for the strike to be authorized, two-thirds of voters must approve the strike. In 2014, the GSOC-UAW voted to strike with 95 percent of voters in favor.

In March 2020, Columbia’s GWC-UAW authorized a strike in a vote of 1,833 to 77. Currently, the union is striking and stuck at a standstill with the University. The GWC-UAW claims it will continue to strike until Columbia meets its demands, and it has now announced its support of the GSOC-UAW in a statement to Spectator.

To signal the beginning of the vote, the GSOC-UAW will be hosting a rally on March 23 at Gould Plaza with a simultaneous virtual rally on Zoom.