Negotiations remain at standstill between Columbia, GWC-UAW nearly one week into strike

Negotiations remain at standstill between Columbia, GWC-UAW nearly one week into strike 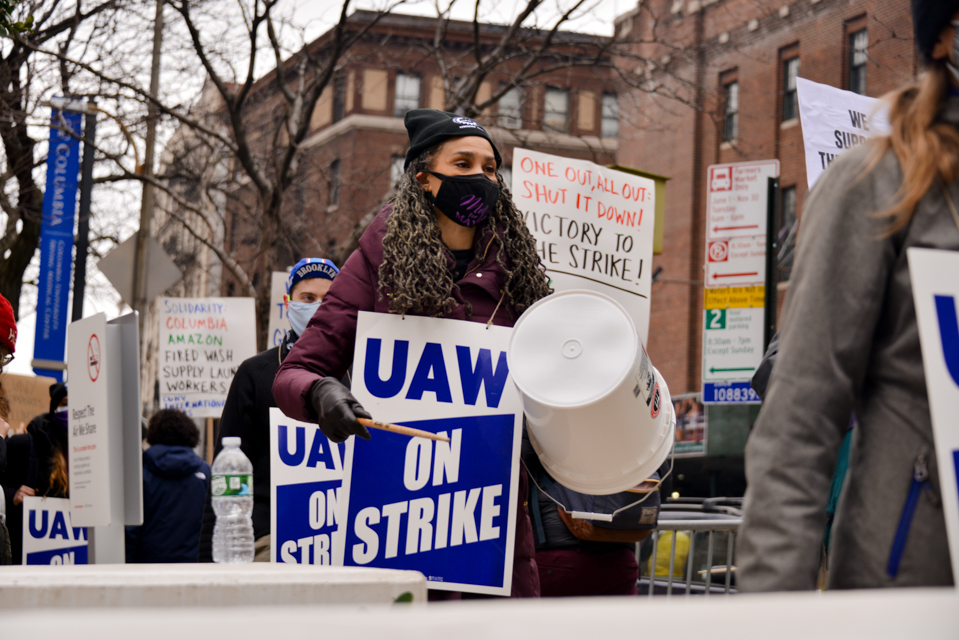 Columbia and GWC-UAW reached a stalemate Thursday while bargaining for their first labor union contract.

Columbia and the Graduate Workers of Columbia-United Auto Workers reached a standstill during Thursday’s negotiations with no proposals presented or positions changed. This concludes a week of little movement at the table while student-workers continue striking for a fair contract.

The strike, which officially began on Monday, is the result of two years of unsuccessful negotiations between the union and the University. A central tension of the strike has been navigating the distinction for student-workers between labor and education. Heading into next week, major differences remain on economic proposals and third-party arbitration for nondiscrimination case appeals. Both sides are feeling the limit of their proposals and are now considering the possibility of introducing outside mediation in the hope of bridging divides and coming to an agreement.

“We’re stuck in a kind of a stalemate,” GWC-UAW bargaining committee member Miles Richardson said. “We’ve made some very substantial moves, we’re waiting for them to move, and they don’t want to move.”

As GWC-UAW members picketed in rain jackets and umbrellas at the Manhattanville campus, tensions were higher than usual in Thursday’s Zoom bargaining session. The University team repeatedly charged the bargaining committee with mischaracterization, and the GWC-UAW accused the University of not addressing its proposals.

Only one proposal was brought to the table this week. The University wanted to clarify its wording on union recognition on Tuesday, proposing to specify that “course assistants” are casual workers, which brings the contract language more in-line with the National Labor Relations Board’s certification of the union. Course assistants were already included in both sides’ definitions of the bargaining unit, but the point of contention remains whether hourly students—including course assistants— who are working more than 10 or 15 hours per week should be included.

The largest issue that remains is financial. The University calculated that over the three-year contract period, union proposals will cost over $29 million more than the University’s proposals. Its team refuses to bargain over individual economic articles, like compensation or fees and tuition waivers, until the GWC-UAW presents a comprehensive financial package with considerably lower demands.

The union, which already cut $11 million worth of demands last week, said it is asking for only its core demands and has received little indication from the University as to where it can be more flexible.

Meanwhile, the University is asking the GWC-UAW to determine how many teaching assistants are represented by New York University’s student union. It wants to back up GWC-UAW’s claims that NYU pays more for its student workers on nine-month appointments. The GWC-UAW said that the number of students does not matter as long as their work is the same as Columbia students.

“It’s an absurd request,” Richardson said. “If they were interested in this, they should have asked about it months ago. If they did that, maybe there would actually have been some chance of doing this, but it’s absurd. It’s just trying to throw it back at us, but that’s not the root of the problem. The root of the problem is do people get paid the right amount for their work?”

The largest non-economic issue remains the union’s request for neutral arbitration in the event of nondiscrimination and harassment appeals. Columbia maintains that it is responsible for these kinds of student affairs, yet the University team has also proposed widespread changes to the Office of Equal Opportunity and Affirmative Action. GWC-UAW representatives say that these changes do not address their central demand for third-party arbitration and leave open the possibility of implicit bias during the arbitration process. There has been no movement on this divide since the start of negotiations two years ago.

The next bargaining meeting is scheduled for March 23. Although it is unclear if both sides will agree on mediation before then, Lee said that the GWC-UAW hopes to hand the bargaining process over to an impartial third-party.

“Mediation is helpful when both sides are not really moving anymore, and I don’t mean moving in terms of counter- proposals. I mean, moving in terms of being really honest and transparent about what you can and cannot do,” Lee said. “I think we laid out for the University where our priorities are, but the University is not communicating in a straight way about what they’re willing to move on.”

Columbia and the GWC-UAW share the goal of getting a contract signed, and neither side wants the strike. With negotiations failing, however, the strike is poised to continue until serious proposals are back on the table.