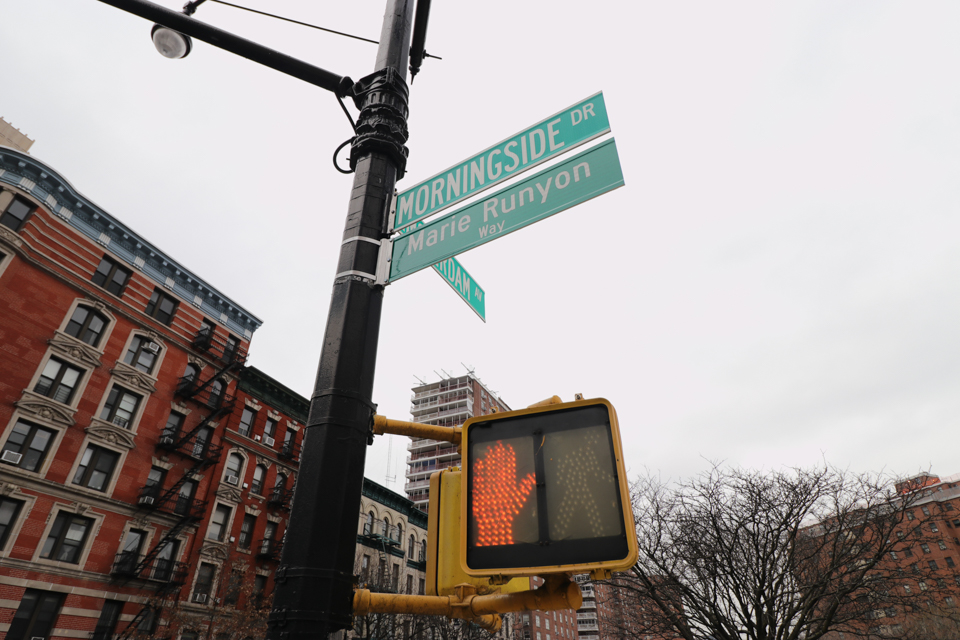 In honor of Women’s History Month, Spectator is publishing a series on notable women of Columbia and the West Harlem community. Marie Runyon, a longtime activist and resident of New York City since 1947, was known for being a prominent progressive in Morningside Heights who fought for decades to prevent Columbia from evicting her and her fellow residents of the University-owned 130 Morningside Drive apartment complex.

Columbia’s history as an aggressive real estate force in Morningside Heights has been well-documented and challenged in the courts for decades. Throughout the 20th century, Columbia sought to acquire surrounding Harlem properties for University space and, in the process, forced many low-income Morningside Heights tenants out of their homes.

The building is located at 130 Morningside Drive, on the corner of Morningside Drive and West 122nd Street. It, along with five others, was designated for redevelopment in 1961 as Columbia’s new site for the College of Pharmaceutical Sciences. However, this building was also Marie Runyon’s home, where she had lived since 1954 as a single mother and a recruiter for the American Civil Liberties Union. Outraged, Runyon found herself challenging an aggressive eviction at the hands of Columbia. She channeled resistance to the University’s efforts by organizing rent strikes and protests with other tenants. Runyon was so dedicated to the cause that she was even willing to write a protest message in her own blood.

“[Runyon] was just a highly unusual human being. She was so dedicated, and she just cared so deeply about issues of the day and people,” Barbara Grissighs, a friend of Runyon, said. “When I first met her back in the ’60s, I was scared to death about her because I never met a bad girl before, and she was a bad girl in my book, thank God. She led; we followed. Whatever she wanted to do, we did.”

Runyon’s fight against Columbia on behalf of 130 Morningside Drive included creating the Morningside Tenants Committee and organizing guerrilla street theater protests, rent strikes, and court cases against Columbia—most of which she won under rent control protections. Even as other tenants moved away after receiving financial settlements by the University as an incentive to move on, Runyon remained steadfast.

Louise Runyon, a poet, a dancer, and the daughter of Marie Runyon, described her mother as an activist who would not settle and who campaigned for housing and other political issues by way of demonstrations, sit-ins, fundraising, and even a roadblock.

“I think in 1961, it was probably my mother’s first demonstration—I know it was my first demonstration. I was 10 or 11,” Runyon said. “There were rocking chairs pulled out to block traffic in Amsterdam Avenue. I remember picketing the Columbia president’s house on Lower Morningside Drive.”

With a reputation as a fighter for the rights of low-income tenants, Marie Runyon received strong support from her Harlem community, which catapulted her into her role as a prominent progressive activist and politician in the city. In 1974, she launched her political career with a run and win for New York State Assembly.

In her tenure as assemblywoman from 1975 to 1976, she continued to fight for the underserved, even showing up unexpectedly at midnight at the Attica prison to ascertain whether the guards were treating the inmates humanely. She publicly denounced notorious Harlem slumlord Adonis Morfesis, who had served jail time for repeatedly failing to provide essential services like hot water and heat to his tenants.

During her time as a state assemblyperson, Runyon continued her work against Columbia’s real estate expansion. Kenny Schaeffer, a housing attorney with The Legal Aid Society, was a tenant lawyer mostly working to fight against Columbia’s evictions and to organize the Morningside Tenants Federation. Runyon was instrumental to his work in Morningside Heights, as she agreed to become a 7A administrator for the 160 and 164 Riverside buildings, pushing Morfesis out of the bidding.

“She really saved those buildings. … She inspired me to stay very involved with the housing movement through the Morningside Tenants Federation,” Schaeffer said.

Runyon also continued her housing activism as the founder and executive director of the Harlem Restoration Project — a tenants’ organization that managed buildings and hired former ex-offenders to rehabilitate apartments—for about 25 years. She was also involved with the American Civil Liberties Union as a membership recruiter and with the National Committee for a Sane Nuclear Policy, the National Conference for New Politics, and the Committee to Defend the Panthers. Throughout the 1960s, she both led students in protests on Columbia’s campus and joined their causes, ranging from organizing against the University’s expansion to protesting against the Vietnam War and racial inequalities.

Tom Gogan, who is also a housing activist in Manhattan Valley and supporter of the squatter movement in New York City, remembered Runyon for her vibrant personality and commitment to meeting issues of low-income tenant rights.

“[Runyon] had a great sense of humor,” Gogan said. “She was a ‘real Southern lady’ [and] carried herself always proudly. She was witty, and she was funny.”

In her late age, she joined the Granny Peace Brigade, which marched for peace, especially in response to the United States’ attack and invasion of Iraq in 2003. She was arrested well into her 90s because of these protests. One of those charges was for blocking access to the armed forces recruiting center in Times Square; she was later acquitted.

Norman Siegel, a civil rights and civil liberties lawyer for Siegel Teitelbaum & Evans, LLP, represented Runyon as she and 18 other members of the Granny Peace Brigade were prosecuted for standing in front of the U.S. Armed Forces office in protest. As Siegel remembers it, the women chanted, “Let us enlist. We are ready to go die, not the young men and women of America.”

Siegel said, “[Runyon] was a quintessential fighter. I think she’s a patriot and role model not just for women, but for men as well. One of the things Marie always told me and told to a lot of people was ‘fight the power.’ Even in these days when I’m in battle, there is Marie in the back of my mind, saying, ‘Fight the power, Norman. Fight the power.’”

Columbia eventually halted all eviction proceedings, which began against 130 Morningside Drive approximately 40 years before. In 2002, after a lengthy court battle, the University renamed the building Marie Runyon Court.

Michael McKee, a tenant organizer, housing activist, and the treasurer of the Tenants Political Action Committee, appreciated the positive impact Runyon had on his own life.

“I became an organizer because of Marie. It wasn’t anything she said to me, but the example she set. She was certainly my mentor,” McKee said. “I never ever saw her ever turn down anyone in trouble or anyone that needed help or advice.”

Her death in 2018 prompted many New Yorkers to reflect on her legacy as a stalwart activist who worked hard throughout her entire life to improve the living conditions of Morningside Heights residents.

“She [was] an inspiration to us all, whether we knew her or not,” Dave Robinson, an executive committee member of the Morningside Heights Community Coalition, said. “The lesson that I took from [Runyon’s] victory was that sometimes people win against powerful institutions.”

Louise Runyon also reflected on her mother’s legacy. She wrote “the broad sweep of my mother’s porch” in her memory:

with broad sailors’ collars, the better to sail …

the proud figurehead, the deep wake