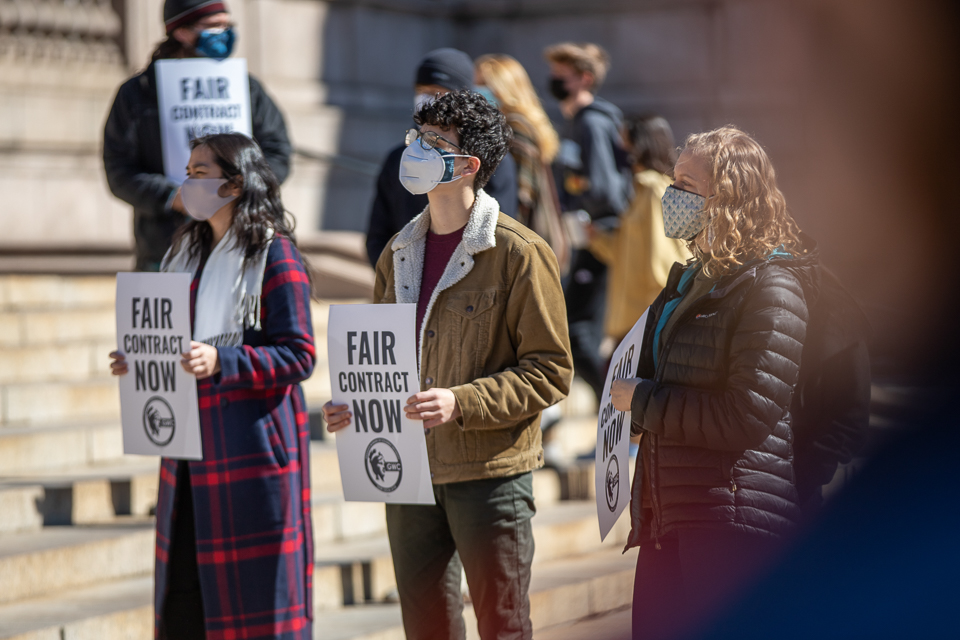 Students are showing support by writing letters and emails to the administration, joining striking student-workers at the picket lines, and donating to funds for striking workers.

As the Graduate Workers of Columbia-United Auto Workers’ strike enters its second week, many undergraduate students on and off campus are voicing their support for the movement, as are other unions and students at other universities.

Columbia-Barnard Young Democratic Socialists of America, the student group behind the tuition strike, has spearheaded these efforts on Columbia’s campus. Students are showing support by writing letters and emails to the administration, joining striking student-workers at the picket lines, and donating to funds for striking workers. Beyond Columbia, the strike has been endorsed by Harvard University’s graduate student union, as well as by numerous local political candidates.

Columbia-Barnard YDSA formally announced its support for the GWC-UAW on its website on March 10, five days before the strike began. A post titled “Response to Provost Katznelson and How You Can Support the GWC Strike” called upon supporters of the tuition strike to also stand in solidarity with the then-forthcoming student-worker strike. According to YDSA co-chair Becca Roskill, SEAS ’22, GWC-UAW has been an important supporter of the tuition strike’s demands.

For its own strike, YSDA has called upon the University to enact a 10 percent decrease in its cost of attendance and a 10 percent increase in financial aid, defund Public Safety, halt its expansion into West Harlem, and grant union recognition for master’s and undergraduate student-workers. The tuition strike has amassed over 4,400 signatures since last semester.

The YSDA-led tuition strike and ongoing student-worker strike are set against the backdrop of a nationwide rise in college tuition—one that is growing faster than the national median income over the past 15 years—and a University that now has the highest tuition of any college in the United States with faster than average tuition growth.

In support of the student-worker strike, YDSA has shared scripts that students can use to “block up” the email addresses and phone numbers provided by interim Provost Ira Katznelson for students to report students who are striking. They call these “the University’s strike-snitching hotlines” and have urged students to file false reports, create fake graduate student names and course title, and then “[emphasize] the real problem is how your instructor has been barred from teaching because the university has failed to provide dignified conditions for them to work under.”

In addition to YDSA’s initiatives, many individual students have made efforts to support the striking student-workers by posting about it on social media and signing petitions. Tatiana Ziff, CC ’24, urged her classmates not to report striking instructors after recent emails from Columbia College Dean James Valentini and School of General Studies Dean Lisa Rosen-Metsch asked students to notify their departments.

“If we, as students who drive this university forward, side with the teachers, the teaching assistants, and the graduate students in their pursuit for better working conditions, … the school has to listen,” Ziff said. “At the end of the day, our voices matter a lot.”

“Watching my classmates walk up to these [picketing] graduate students and ask ‘Hey, how can I help out?’ I think that interaction is really powerful,” Ziff said.

Columbia College Student Council Class of 2024 President Erick Zent brought snacks to those picketing on campus. He argued that this strike affects undergraduate students in addition to graduate student-workers. Discussions on union recognition for undergraduate “course assistants” took place during bargaining meetings last week. A point of contention that still remains is whether the threshold for inclusion should be 10 or 15 hours per week for hourly students. The union is also pushing for undergraduate teaching assistant salaries to be increased to $26 per hour.

“I think it’s really important for undergraduates to understand that we also have a major stake in the contract that’s being decided right now,” Roskill said. “Because one of the items on the table is whether undergraduates will be part of the bargaining unit. … This is really an important moment if we want to be protected as a class of labor in the University.” As the University continues to argue that the union’s demands are too expensive to accept, many have pointed to not just its $11.3 billion endowment, but also University President Lee Bollinger’s $4.6 million annual compensation.

“I think nobody’s directing [any] anger and frustration toward the grad students. I think everybody recognizes the fact that they need a livable wage and they need health care. … Our frustration is definitely directed toward admin,” Zent said.

As they find ways to support the strike, many undergraduate students are voicing compassion for these student-workers.

“We want to see [student-workers] succeed,” said Townesend Nelson, CC ’21 and co-chair of Columbia-Barnard YSDA. “We want them to be paid a fair living wage, to … have the ability to support their family and their kids.”

As the strike enters its 11th day, negotiations remain at a standstill and various undergraduate courses and office hours remain canceled. However, regardless of disrupted classes and uncertainty surrounding grades, students remain sympathetic.

“The student-workers who are participating in the strike are extremely concerned for the wellbeing of their students,” Roskill said. “Striking and disrupting their education is the last thing that they want to do. But at this point, it’s out of their hands.”