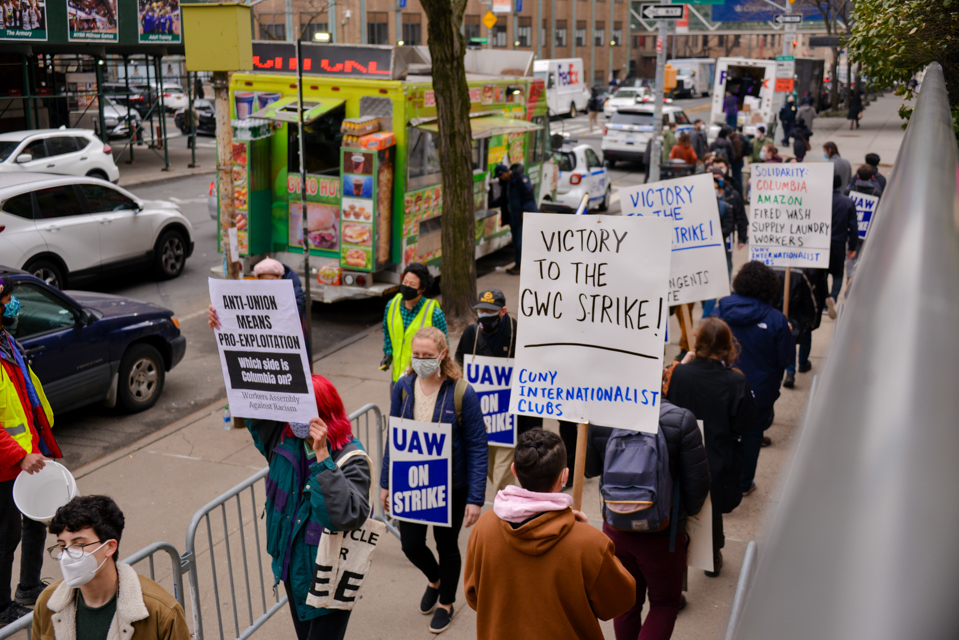 GWC-UAW’s current strike, which has entered into its third week, is continuing the union’s tradition of setting precedents for the broader student labor movement.

The Graduate Workers of Columbia-United Auto Workers started bargaining over two years ago. Three years before that, a 2016 National Labor Relations Board case involving the GWC-UAW secured the right for graduate student unions to exist at private universities. GWC-UAW’s current strike, which has entered into its third week, is continuing the union’s tradition of setting precedents for the broader student labor movement.

As student workers note the pandemic’s adverse effects on already existing inequities in working conditions, GWC-UAW has found solidarity with other universities’ graduate student unions as they share the common goals of fair wages, third-party arbitration for harassment cases, increased opportunities for tenure-track positions, and more.

While GWC-UAW is still fighting for its first contract, many peer institutions are back in negotiations one year after signing. There now exists hope that these new negotiations will produce contracts that address the impact of the economic downturn caused by the ongoing pandemic.

Harvard Grad Students Union-UAW Local 5118, for example, has returned to the bargaining table with Harvard University before the expiration of the one-year contract it signed at the start of the pandemic. The HGSU-UAW is working to revise the workplace article to include the home as a workplace, among other demands.

On March 25, Graduate Labor Organization at Brown University posted a 10-foot long receipt of costs that members had accumulated while working during the pandemic. GLO, which has the right to reopen its three-year contract with Brown, launched a Raises and Rights campaign to help publicize its demands for greater pay and COVID-19 safety measures. The Georgetown Alliance of Graduate Employees is currently wrapping up a period of impact bargaining with Georgetown University over new COVID-19 agreements. Its three-year contract, which was first negotiated last year, allows both parties to negotiate over major pandemic-related developments that were not present at the time of signing.

“Organized groups saw it as an opportunity to, not capitalize, but to rectify an already deeply imbalanced and flawed system because people are really not making ends meet anymore,” Rithika Ramamurthy, president of GLO, said. “I can’t even imagine if, as a grad worker in Providence, I’m having trouble balancing my budget at the end of every month, what that would be like to do in New York City. I can’t imagine it.”

Despite the pandemic exacerbating graduate students’ financial situations, Columbia has attributed its unwillingness to negotiate a financial package with the union to the financial losses during the pandemic. The University has lost $700 million over the last year, even as its endowment has grown.

“No single round can produce optimal results. This is especially so during the pandemic, which has placed Columbia, and higher education more generally, under great fiscal strain, with responses that have included wage and hiring freezes. Regarding compensation, there are lines we are unable to cross,” Interim Provost Ira Katznelson wrote in a statement earlier this month.

The pandemic has also further laid bare the dire prospects of a tenure track job in academia. Even prior to the onset of the pandemic, these elusive positions have been steadily decreasing. In 2019, for example, Columbia’s English department was unable to place any Ph.D. students into tenure track positions. The academic job market has constricted now that universities are under financial duress and many, including Columbia, are enforcing hiring freezes.

According to Gary Rhoades, professor of higher education at the University of Arizona, graduate students are now facing the reality of working hard during a pandemic with little future pay-off.

“Over the past 30 years, the prospects for graduate students who graduate for a tenure track position have gone down because more and more hiring is in non-tenure track positions,” Rhoades said. “What I call them is would-be apprentices, who are hoping for the master or the mistress’ job at the end of the apprenticeship. But what’s happened is, they’ve realized more and more that they’re really a low-wage, exploited workforce. There’s not necessarily going to be a tenure-track position at the end of their apprenticeship.”

GWC-UAW is part of United Automobile Workers Local 2110, which has seen increasingly greater activity among its union workplaces. Not only is GWC-UAW on strike, but New York University’s graduate student union, GSOC-UAW, is currently conducting a strike vote. Last winter, the Museum of Fine Arts in Boston and Film at Lincoln Center joined UAW Local 2110, and nonprofit Studio in School is beginning to organize under its local UAW branch. President of UAW Local 2110 Maida Rosenstein partly credits these developments to a younger generation of union supporters.

The pandemic falls within a greater context of national reckoning with racial and social issues. HGSU-UAW President Brandon Mancilla has called Harvard’s strike, which began in December 2019, the “#MeToo strike.” Like GWC-UAW, HGSU-UAW was advocating for access to grievance procedures and neutral arbitration for discrimination and harassment. Although the union won the right for union representation throughout the complaint process and working groups for race-based and power-based harassment, third-party arbitration for all harassment cases remains to be fought for in their second union contract.

“The younger academic employees who are in these graduate employee unions and the postdoc unions, a good proportion of them are international as well, they’re drawing on the social movements and the issues of broader society––whether that’s #MeToo, or Black Lives Matter or reacting against the xenophobia against international folks,” Rhoades said. “Those are becoming really important points of organizing.”

The connections that graduate student unions have formed on social media allow them to engage in more active solidarity with other movements. Jeremy Canfield, an organizer with GAGE, said that he was in contact with GWC-UAW since his first day organizing at Georgetown. They aid each other with signal boosting, signatures or call-ins, and help with general campaigns.

“It’s both because we care about them as workers, as people, and want them to have a just and a fair contract that lets them have economic independence––lets them have a fruitful term of employment while they’re working as a grad assistant––but it also is something that helps both of us down the road,” Canfield said.

K-SWOC organized a 24-hour strike on March 16, demanding that Kenyon College give them the right to unionize. This was the first known across-campus labor strike among undergraduates at a private, American educational institution. Kenyon still refuses to recognize the union.

Sigal Felber, an undergraduate student at Kenyon and member of the K-SWOC Steering Committee, said that GWC-UAW lent support from the very start. GWC-UAW helped with publicity and walked the committee through the implications of the 2016 Columbia decision and higher education organizing.

“It demonstrates that strikes work, and standing in solidarity,” Felber said. “Within the union at Columbia is great, [but also] then across the country to us. We don’t exist in a vacuum. No worker exists in a vacuum. There’s always someone else that has your back.”

All unions attempted filings at the NLRB during the Trump administration in a show of great solidarity, as they all feared that the NLRB would overturn the critical 2016 case whereby GWC-UAW challenged the precedent and reaffirmed the right for unions to exist at private universities and engage in collective bargaining. This allowed universities to operate more according to their own terms because they did not need to fear appeals to the NLRB.

Under Trump’s presidency, the NLRB proposed a regulation that would have overturned the 2016 decision had the board not fallen short of passing the proposed statute. The Biden administration said on March 15 that it will be withdrawing the proposed regulation, ensuring that Columbia’s case remains the precedent going forward.

With the precedent having changed, eyes are now on a labor bill making its way through Congress called Protecting the Right to Organize Act. The PRO Act is a package of five pro-labor provisions that include a right to arbitration and federal mediation during bargaining negotiations for a first labor contract. The PRO Act has passed the Democrat-controlled House but stands in the balance of the Senate, where it likely faces the filibuster.

“The more graduate unions that are fighting for these work protections and wages, the stronger the labor movement is nationally. It isn’t just about grads. It’s about unionism and the labor movement becoming stronger, more radical than it’s been in the past, and just more widespread,” Ramamurthy said. “The grad worker movement is just one piece of that larger wave that we’re seeing now, so hopefully we pass the PRO Act, and we can get to work.”

With signs pointing toward an increasingly robust labor movement in private sector institutions, both GWC-UAW and Columbia know that every article in their contract matters.

The same legal framework which has historically denied unionization at private, nonprofit universities, and which was overturned by GWC-UAW, actually has its roots at Columbia. In 1951, clerical workers in Columbia libraries joined together in a union, and the University refused to negotiate with them. With an eventual NLRB decision in favor of Columbia, the board said it did not have jurisdiction over nonprofit educational institutions, and this was the precedent for the two decades that followed.

“There’s a lot more graduate worker unions in the private sector than there were in the past, and it’s going to be considered a lot more normal and usual for graduate workers to unionize,” Rosenstein said. “I think it’s too bad that Columbia does not fundamentally accept that.”

The pandemic has made reaching an agreement even more urgent, but some say that it is unclear what the long-term impact on unions will be. In his forthcoming book titled “For Labor to Build Upon: Wars, Depression, and Pandemic,” William B. Gould IV argues that calamities like World War I, World War II, or the Great Depression generally aided unions.

“The jury is still out what’s going to happen as the result of this pandemic, where I think there is a great dependence upon labor and the possibility of labor being able to exercise a great deal of strength,” Gould said. “The problems of labor, along with hostility of the Trump government and other factors, is that the unions have not put sufficient resources into organizing the unorganized. It’s possible that the present pandemic, labor law reform could produce a kind of symbiosis, through which unions are re-energized and regain their position. But, the verdict is still out on that.”