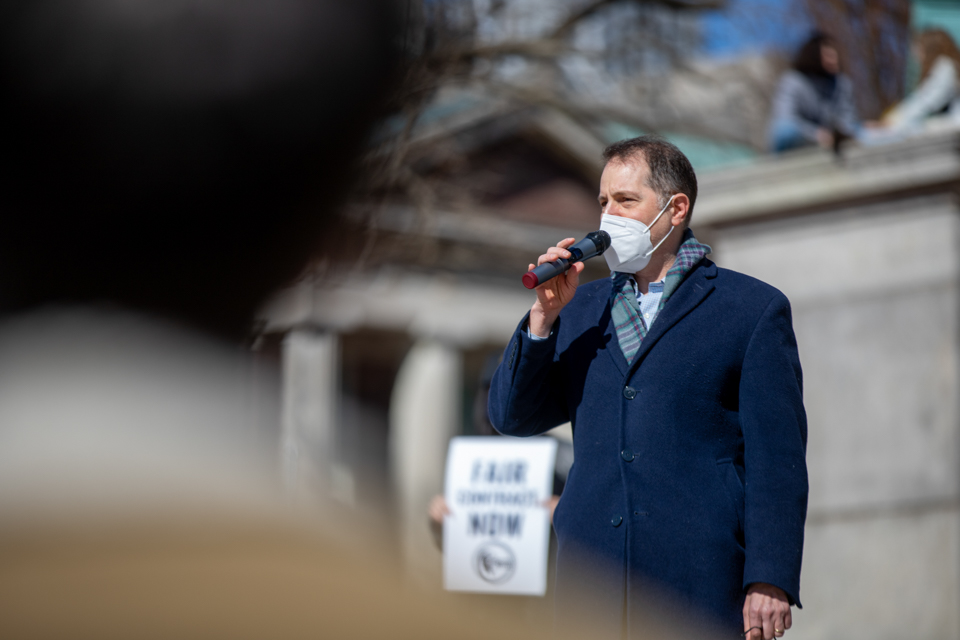 The New York City Council is the city’s legislative body and has 51 members, each of whom represents a district of the city. Council members are elected for a four-year term, renewable only once. Beyond their legislative powers, they are responsible for approving the city’s budget, and they focus much of their attention on land use.

Levine has a reputation for focusing on issues such as affordable housing, equity for parks and low-income neighborhoods, and safer streets. But according to Curtis Arluck, a Democratic district leader in New York’s seventh district, Levine’s biggest piece of legislation was the 2017 Right to Counsel law, which guaranteed legal services to city housing tenants facing eviction. Citizens whose income falls below 200 percent of the federal poverty level—starting at $25,750—are entitled to free legal assistance.

“[Right to Counsel] is very important, because a lot of landlords bring on mass eviction proceedings … and in the vast majority of cases, they’re kind of for made up reasons. And the housing court is really very complicated. And you need to have an attorney just like you would in a criminal case. So Mark was instrumental in that,” Arluck said.

Laura Friedman, the president of the Morningside Heights Historic District Committee, has praised Levine’s work on increasing the safety of parks, specifically in the wake of the murder of Barnard first-year Tess Majors in Morningside Park last year.

“He was quick to get out there and make sure that this didn’t turn into a racial thing. But instead, it was an issue of security in the parks, making sure our parks are secure,” Friedman said.

Some residents also believe that Levine’s work during the pandemic has been strong, particularly in his role as chair of the Health Committee.

“He worked hard to get information out there to make sure we were protected to get as much equipment, protective equipment, that we needed, and all sorts of things. So he’s responsive, he’s intelligent, he moves issues forward,” Friedman said.

Both Arluck and Friedman also praised his work concerning rezoning, which is a contested issue in many neighborhoods across the city.

“He got us the attention of the [City Council speaker] Corey Johnson. … The Department of city planning had just turned down our request to rezone this neighborhood—they had literally written a letter [to deny the request]—but Mark got Corey Johnson to call the mayor and had them rescind that letter. That was Mark, through Corey,” Friedman said.

However, not all members of the community believe that he has been a successful City Council member. Monica Dula, an attorney and board member of Community Board 9, described his mandate as “noneventful.”

“Here’s what he did: He made sure car rental companies got lots of parking spaces … which meant residents who have cars could not park. He’s also made sure that real estate developers got lots of help when they had any problems—the people in his office would help them. [But] in terms of working for the community, he has done nothing,” Dula said.

Despite Arluck and Friedman’s praise, Dula believes that Levine’s efforts in rezoning have not benefited the community.

“I guess you have breadth and depth. And in terms of breadth, he could do more. He—Manhattan has over a million and a half people—represents them. He goes all over Manhattan, talking to people hearing their concerns and fighting for their concerns, he can be involved in more things. And I think he will be better known to more people than in his current position. But in terms of actually being able to enact legislation, I think there’s less because the borough president does not have any legislative power.”

Being a borough president requires staying in touch with many communities’ issues and understanding them at large. However, according to Dula, Levine has not been in close contact with the district’s community during his tenure as a City Council member, which raises speculation about how effective he would be as borough president.

Community members expect him to work on several issues in Manhattan if he is elected as borough president, while still giving focus to West Harlem. One of the most pressing issues is public health. Specifically, Dula believes that Levine has been inefficient in providing enough vaccines and advocating for healthcare in the district.

“This district has consistently had some of the highest COVID rates in the city—we should have had a mass influx of people from the Department of Health working on bringing the rates down and making sure that we had access to vaccines early,” Dula said.

According to Arluck and Friedman, overdevelopment and affordable housing also remain pressing issues in Manhattan, and they expect him, if he is elected, to advocate for policies tackling both problems.