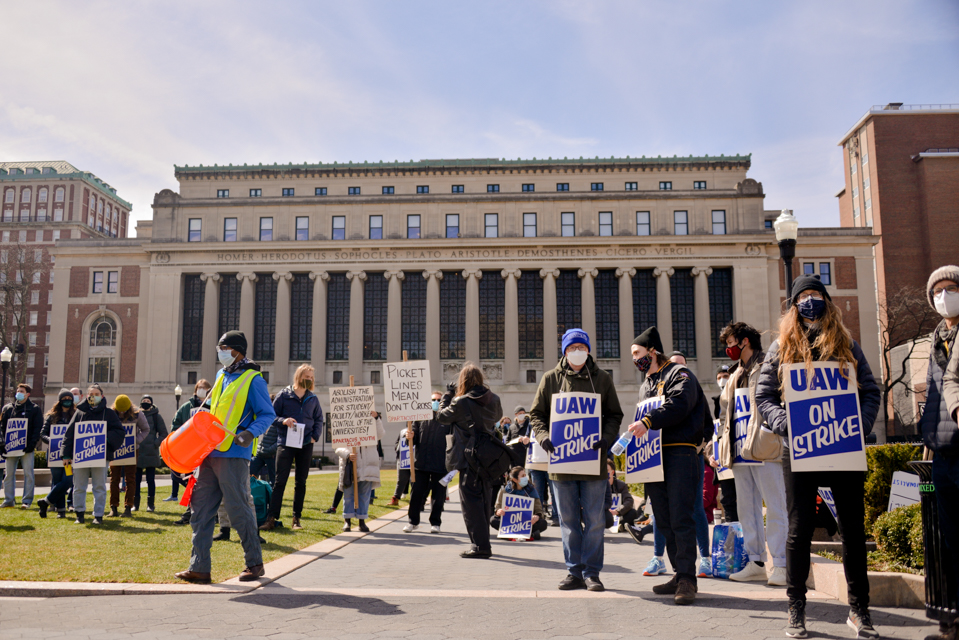 Since the strike began on March 15, many graduate instructors have cut off formal communication with their students and have stopped holding classes.

Lit Hum texts have been scrapped. Essays in University Writing are being graded without feedback or guidance. Some professors are discussing canceling courses altogether. As Columbia’s student-workers and teaching assistants strike for a third consecutive week and negotiations remain at a standstill, many undergraduate students have seen some of their classes grind to a halt.

Since the strike began on March 15, many graduate instructors have cut off formal communication with their students and have stopped holding classes, which has dramatically altered the educational experience Columbia is offering to its undergraduate population.

Prominent figures like New York Attorney General Letitia James have canceled appearances on panels to show solidarity with the Graduate Workers of Columbia-United Auto Workers union. And many recitations—which have become even more valuable for students as online class sizes increased during the pandemic—simply are not happening.

“I feel really behind now,” said Chase Bryan Craig Cutarelli, CC ’23, who believes the University should compensate for the strike by offering more courses this summer. “But again, I don’t trust the University at this point to do anything that really makes sense.”

In an email to students Wednesday, Columbia College Dean James Valentini and Dean of Academic Affairs Lisa Hollibaugh said that although the University still has not reached an agreement with the union, the University will not allow the strike to hinder students’ academic progress or prevent seniors from graduating.

“For all students, we will not allow this to impede your academic progress and your completion of degree requirements,” they wrote. “In addition, we are working with the faculty who oversee your academic programs to determine the best approach to grading in any affected courses, so that we honor the work you have invested in your term so far.”

Columbia currently charges its students the highest tuition in the nation for what has long been touted as a prestigious education. But during a semester already forced online by the pandemic, the apparent learning loss resulting from the strike is forcing many to question the quality of a Columbia education. Although the University administration has already said its first priority in mitigating the strike is “undergraduates’ completion of their coursework,” the lengthy strike is a result of the University’s refusal to agree to pay for $30 million worth of demands from the GWC-UAW.

While many undergraduates have expressed solidarity with the union’s longtime demands for livable wages and neutral third-party arbitration in harassment and discrimination cases, the University’s yearslong refusal to concede to those demands has left students and their graduate instructors—many of whom teach required classes as part of Columbia’s Core Curriculum—in an atmosphere of uncertainty.

“We don’t get further time to talk about concepts,” said Charlotte Cassidy, GS ’23. “As I understand it, certain grades won’t be happening until the strike is over.”

Exactly how the continued strike will affect grades, course syllabi, and the overall educational quality of this semester—which is already affected by remote learning—is unclear. Some graduate instructors have even discussed canceling their courses if the strike continues—raising questions about how that credit could be redistributed, or tuition dollars refunded.

“I think canceling class is a possibility, but from the little that I have had the chance to talk about, cancellation is seen as an extreme outcome, and probably the most harmful to both sides,” Juan David Cadena Botero, GSAS ’21, wrote in an email to Spectator.

Even if the strike ends quickly, some instructors say credits earned this semester will be considered differently than those from previous years.

As high-profile figures like New York Democratic Senator Chuck Schumer express support for the strike, a growing number of speakers have canceled appearances at Columbia. On Wednesday, the Columbia Law School Democrats canceled an event with former Democratic Representative Ben McAdams, a Law School alumnus, in solidarity with the strike. On Monday, the Lehman Center for American History went so far as to postpone its academic programming for the rest of the school year. In a normal year, these events enrich the academic experiences of both undergraduates and graduates—now, they are disappearing.

Related to these losses is the financially hemorrhaging Faculty of Arts and Sciences that, under University President Lee Bollinger, has suffered due to Columbia’s increased prioritization on becoming a global research institution. Over the past decade, projects such as the Manhattanville expansion have been funded at the expense of humanities programs like the Core—which is now taught almost exclusively by graduate and postdoctoral students—whose labor is less expensive than that of tenure-track faculty members.

The strike hit Labanieh’s UW class as it was about to start Progression 3, a research paper considered by many undergraduate students to be a rite of passage at Columbia and a necessary introduction to college writing. During the unit, students learn from Columbia librarians how to search databases, cite sources, and use their research to add to an academic conversation. But because of the strike, none of that has happened, Labanieh said. Though her students have still been submitting assignments during the strike, they’re mostly communicating with her on a limited basis through her personal email, and no classes are being held. She is unsure what the grading process will look like if the strike continues for another week—let alone the rest of the semester.

“Of course, various expectations will be modified,” she said. “I’m not going to allow the undergraduates that I care for to be punished because of Columbia’s bad behavior.”

Another staple of the Core is Literature Humanities, a yearlong course taken by first-year students. Will Glovinsky, GSAS ’21 and who teaches Lit Hum, said he had to take several texts off his syllabus in the last three weeks. His students will not read “Don Quixote” or several French and Russian stories from the 19th century.

“At this point, if we get back into the classroom, we’ll probably only have four or five classes left, so it’s going to be really tough,” he said.

Exactly how many classes have stalled over the past three weeks is unclear. GWC-UAW has more than 2,000 members and within the Core specifically, the percentage of Literature Humanities, Contemporary Civilizations, Art Humanities, and Music Humanities classes that are taught by graduate students range from 21 to 35 percent.

Despite the University’s assertion that academics will not suffer as a result of the strike, interim Provost Ira Katznelson already acknowledged the educational setbacks a strike would bring. In an email to students sent on March 8, seven days before the onset of the strike, he used the prospect of learning loss to discourage union members from striking in the first place.

“We need to be mindful of the price of a stoppage, not least for the thousands of students who have been grappling with non-traditional education via Zoom and hybrid classes,” Katznelson wrote. “It would be disruptive to curtail key features of pedagogy at this particular moment.”