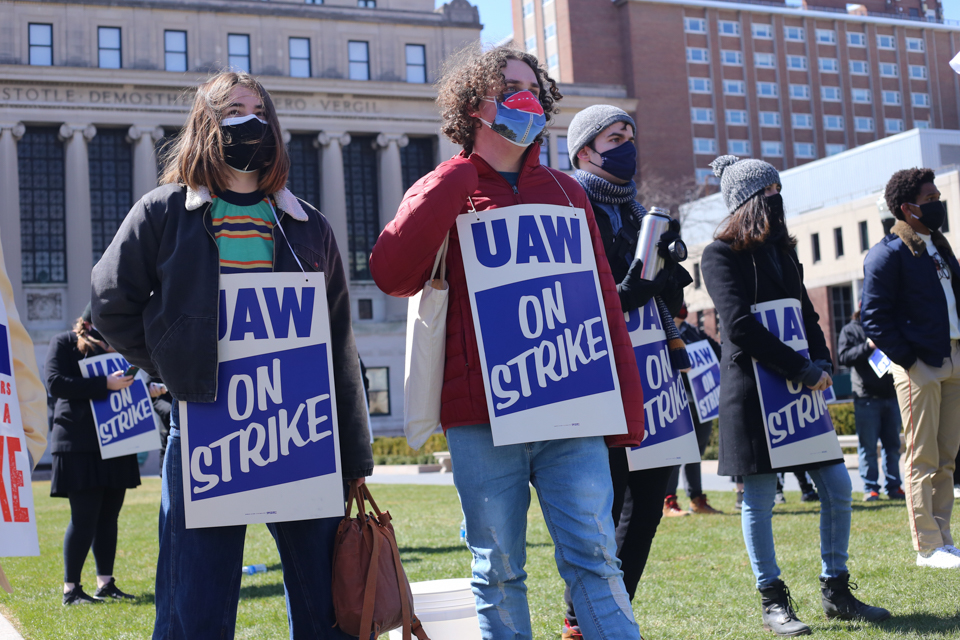 GWC-UAW’s strike will be put on pause starting Monday, April 5.

Student-workers are expected to return to work on Monday, April 5, after the Graduate Workers of Columbia-United Auto Workers’ bargaining committee voted 7-3 on Friday to pause the strike. The committee accepted the University’s offer, which called for mediation with a corresponding strike pause. Student-workers, who have been striking since March 15, retain the right to strike at any point.

This development is highly divisive within the union. Hundreds of student-workers debated the proposal for hours during Friday’s general body meeting, while other members contributed to the discussion over email. The bargaining committee, a team of ten representatives elected to represent the over 3,000 student-workers, also spoke with organizers, reviewed surveys, and fielded feedback before making the final decision.

“This has been one of the more contentious decisions that we’ve had to make. I think people have a lot of time, a lot of money, and a lot of emotion invested in this, and it’s very important to everyone that we get this right,” bargaining committee member Miles Richardson said.

Joanna Lee was one of the bargaining committee members who voted against accepting the proposal. She said the majority of committee members did not want to prolong the strike, which would have been entering into its fourth week.

“It was very clear to me that many other members of the bargaining committee were unwilling to continue striking, no matter what,” Lee said.

Bonnie Siegler, a third-year doctoral student in the sociology department, helped circulate a poll during Friday’s general body meeting to gauge student-workers’ opinions. She said that currently, of 370 responses, only 5.9 percent of workers were in favor of the bargaining committee’s ultimate decision. The largest proportion, 33.5 percent of participants, said they wanted a concession in exchange for pausing the strike. In response, the bargaining committee said that this poll was not necessarily indicative of the over 3,000 student-workers in the unit.

“There’s an imaginary silent majority, to be clear,” Siegler said. “We don’t think that that is real. It’s just a strategy to get people in these meetings to feel like they’re not being representative.”

Lexie Cook, a sixth-year doctoral student in the Latin American and Iberian Cultures department, is a member of GWC-UAW and is not in favor of the decision for mediation. She hoped the Committee would at least take advantage of the opportunity to pause the strike with a demand for recovering lost wages or greater flexibility on an open article.

“There was no attempt to get a concession, and the idea that you would not even take advantage of that small moment of leverage to do that is unthinkable,” Cook said. “It’s not even strategically absurd. It’s an absolute betrayal of all of these people who have lost weeks of wages who have made huge sacrifices to go on strike.”

Amelia Spooner, a fourth-year doctoral student in the history department, is a member of GWC-UAW and believes the decision is an example of the union leadership’s failure to consult with rank and file members. According to Spooner, the bargaining unit is structured so that the ten members of the bargaining committee “have no real requirement” to consult with members of the union, especially when a strike is paused instead of called off. Spooner, Cook, Siegler and others are attempting to contact student-workers across the bargaining unit to decide on next steps for dissatisfied student-workers.

“We have been left out systematically from the very beginning, in the elaboration and research and writing of this contract. And so it’s no surprise that there’s a gap between what we want and what they want,” Spooner said.

The University team, led by outside council Bernard Plum, extended the proposal for mediation and a strike pause during Thursday’s bargaining session and confirmed GWC-UAW’s acceptance of the proposal on Saturday morning.

“We have always believed that a meaningful agreement can be struck that advances the interests of our graduate workers and strengthens the University both academically and as an employer. The GWC-UAW’s acceptance of our offer to pause the strike immediately and enter mediation brings us an important step closer to that outcome,” a University spokesperson said in a statement.

One of the bargaining committee’s main motivations in responding within a day of the Thursday proposal was making sure student-workers had enough advance notice of their return to work on Monday. As a precondition to accepting mediation, the bargaining committee ensured that student-workers will not be required to make up three weeks of work, and they can maintain their typical workload. Student-workers are expected to be paid for additional work, but will otherwise remain uncompensated for the time that they were striking.

“It’s time-sensitive, and so we wanted to make a clear decision quickly. We took all of this together, and what’s important is that we haven’t ended the strike. We’ve paused it,” Richardson said.

GWC-UAW is not currently bound by a no-strike clause, which means student-workers can continue striking during the pause––however, they will no longer be eligible for UAW funding assistance if they choose to continue striking. The union hopes to still conduct informational pickets, and the bargaining committee plans to actively evaluate the efficacy of mediation as it takes place within the next few weeks.

Mediation is common during bargaining negotiations, and first, the GWC-UAW Bargaining Committee and the University will agree upon a mediator who acts as a neutral third party. A mediator does not have the power to end the strike or resolve open articles, but will help facilitate conversation. During the 73 bargaining sessions that have taken place between the University and GWC-UAW since negotiations began over two years ago, the union’s economic demands—which currently would cost $45 million more than the University’s proposals—have prevented the two parties from making significant progress.

Richardson said GWC-UAW plans to hold open mediation sessions, which will be available for members to attend, like the bargaining sessions. Unlike during negotiations, however, where regressive bargaining is seen as a “sign of bad faith,” the difference with mediation is that sides are not bound by their proposals. He said GWC-UAW hopes this new format will encourage the University team to present more proposals.

“It allows them to be a lot more free with us than they can be in normal bargaining. That’s part of why we see it as a path forward, because it allows them to make offers more freely,” Richardson said. “They keep saying they have wiggle room, but we don’t know what that actually means. And we’re hoping that mediation gives a way to do that, but if they just keep parroting the same lines, then we’re going to be back on strike again.”

The union first proposed mediation during a bargaining session on March 18, four days into the strike when negotiations were at a standstill. The University team was hesitant to begin mediation, saying that the time used to educate a mediator was better spent finding a solution at the bargaining table.

Three weeks later, no major articles have been closed, and student-workers on strike lost two weeks of pay. The issues that remain to be settled are wage increases, access to third-party arbitration in cases of harassment, summer stipends, and health benefits, among others. The hope is that mediation will end the stalemate and that the GWC-UAW and the University will finally achieve their first labor union contract.

“We tried to get to get a solution that would help everyone, and we’re hoping that this will lead to an agreement quickly that is amenable to both parties,” Richardson said. “And if that’s not the case, then we’re going to go back on strike, and we’re going to keep fighting for a fair contract.”