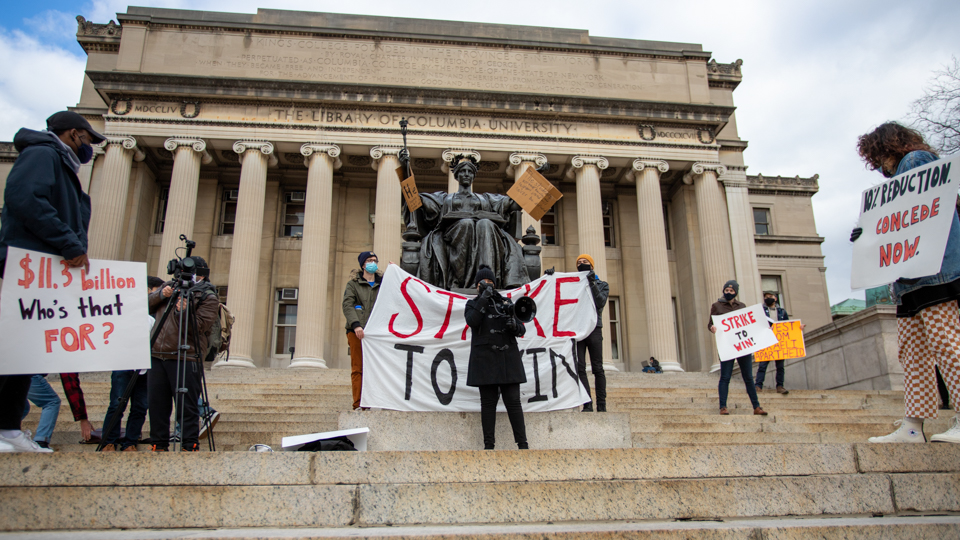 The strike was ultimately unsuccessful––as the University refused to lower tuition rates––but organizers say this is only the beginning.

Over the past two months, students across the University have been withholding tuition payments or signing on in support of the strike with the hope of winning a 10 percent tuition reduction, among other demands. These demands went unrecognized by the University.

In a vote organized by the YDSA, a majority of supporters were in favor of continuing the strike, but not enough actively striking respondents were committed to continue withholding their tuition. YDSA co-chair Emmaline Bennett, TC ’22, estimates that only about 100 students were withholding payment by the strike’s end. The exact number of strikers have remained unknown throughout the strike, with organizers relying on internal polling to gauge support.

Strikers came from across the University, with an especially strong showing from master’s students from Teachers College.

As of April 5, the first day of fall 2021 registration, students who owe $1,000 or more to the University are blocked from registering for classes. Additionally, for graduating students with unpaid tuition and fees of $1,000 or more, the University can withhold diplomas and transcripts until payments are made.

Sarah Knispel, SSW ’21 and an organizer for the tuition strike, is in her last semester of a two-year master’s program in social work. She has been withholding payment since the first day of the strike, on Jan. 22, and does not plan to stop. She said she is prepared for a diploma hold, although most of her tuition is paid by loans and financial aid, so she owes the University less than $1,000.

Her goal now is for Columbia to pay for the remaining expense, a goal that she believes is in-line with the motivating belief behind her decision to strike—that education should be free or affordable for all students.

“I know Columbia could forgive me that last little bit that I owe them, and I’ve still sacrificed two years of my life, my credit score, my entire life savings, and I’m going into the job market $60,000 in debt,” Knispel said. “I’m going to keep withholding. I’m going to see how far I can push the administration to do one thing right.”

In addition to tuition payments, most student strikers incurred a $150 late fee after intentionally skipping a payment deadline on Jan. 22. Although many received late fee waivers from financial services, YDSA is also prepared to distribute nearly $10,000 in crowdsourced funds to offset late fees.

One of the strike’s economic demands was for Columbia to forgive all late fees during the pandemic. Organizers are considering it a victory that the University did not charge additional late fees for skipping later payment deadlines on Feb. 18 and March 18. In addition to reducing tuition by 10 percent, YDSA called for an increase in financial aid by 10 percent and replacement of “student responsibility” with grants.

YDSA co-chair Townesend Nelson, CC ’21, like other organizers, considers the strike’s greatest victory to be Columbia’s announcement of the formalization of its non-investment policy for some oil and gas companies, which happened to coincide with the first day of the strike. The commitment came after years of organizing from some of the YDSA’s coalition partners, the Sunrise Movement at Columbia and Extinction Rebellion Columbia, as well as referendums from Barnard and Columbia College students. The University’s announcement of the non-investment policy did not point to the tuition strike as a cause of its decision.

The announcement also fell short of YDSA’s demand for complete fossil fuel divestment as well as divestment from specific companies “involved in human rights violations in Palestine,” but Nelson said it at least demonstrated the administration’s awareness of the power of the strike.

“Since then, Columbia has basically remained pretty aloof,” Nelson said. “We know that they obviously know about the strike––I mean, they were making these announcements of divestment on the very day we went on strike. But, since then, Columbia has just continued to neglect the thousands of students withholding tuition, and we haven’t won any concrete concessions since.”

The University never sat down with organizers or directly acknowledged the movement, but some YDSA organizers still see the tuition strike method as potentially effective. Tuition remains one of the only leverage points that students have each semester, and that power will always be there for future campaigns.

The Columbia-Barnard YDSA is hopeful because it has also seen greater long-term support for its mission. The club, which is over two years old, gained 58 new members throughout the strike for a total of 73 members. YDSA is currently polling its members for support for a fall 2021 tuition strike.

“There’s no other route through which we can win these demands except through collective action. The problem is just that we need to organize more people in order for that collective action to really force Columbia to do what it is unwilling to do, which is simply to listen to students’ demands,” Bennett said.

The YDSA is ending the tuition strike on the same day that the Graduate Workers of Columbia-United Auto Workers is pausing its labor strike after accepting the University’s proposal to bring in outside mediation for the remainder of negotiations. One of the open articles that the GWC-UAW and Columbia will be debating is whether to grant union recognition to casual hourly student-workers who work between 10 and 15 hours per week.

“We were able to build up much more solidarity between different sectors of the University and make it so that these tuition-related demands would not come at the expense of graduate workers,” Bennett said. “And, pushing for the narrative that we can both give graduate workers their demands and reduced tuition, and that is actually very easy for Columbia to do.”

However, organizers hope to play the long game. They said support for the tuition strike as well as the prominence of the organization grew significantly, with 4,700 students ultimately signing on in support.

“This was always going to be a stepping stone in order to get more people involved and get people to recognize the tuition strike as a viable tactic, as something that can organize a lot of students,” Nelson said. “One of our biggest obstacles this semester was people not taking it seriously or not really thinking it was legitimate that students could actually pull off something like this, and I think we have more than proved our point.”