As most student-workers return to work, the religion department continues to strike

As most student-workers return to work, the religion department continues to strike 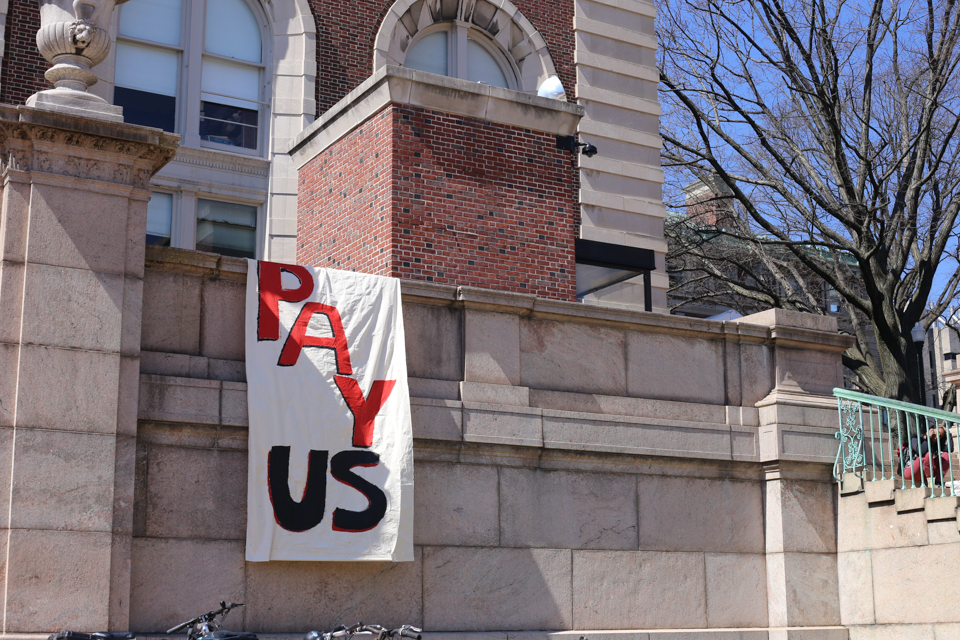 The religion department’s graduate workers have decided to continue striking, despite the GWC-UAW’s bargaining committee decision to accept the University’s proposal to pause the strike and enter into mediated negotiations.

In spite of the Graduate Workers of Columbia-United Auto Workers bargaining committee’s decision to pause the union’s strike, the religion department’s graduate workers have decided to continue striking.

On Friday, the GWC-UAW’s bargaining committee voted 7-3 to accept the University’s proposal to pause the three-week labor stoppage and enter into mediated negotiations. Department faculty were notified that student-workers were expected to resume their work on Monday. The pause, however, is voluntary, as striking is a legally protected decision that individual workers can continue to exercise. Graduate workers in the religion department have expressed disappointment with the bargaining committee’s decision to accept the University’s proposal without requesting any concessions in return. On Monday, they declared that they will continue striking until their demands have been met.

Along with the initial demands of the strike, which include improved health benefit plans, increased child care subsidies, wage hikes, and third-party neutral arbitration of misconduct investigations, the religion department is now also demanding the back pay of lost wages.

Within the union, representation has been a point of contention, as some workers claim that there is a disconnect between the spirit at the picket line and the actions of the bargaining committee. After the bargaining committee’s decision to pause the strike, an informal poll was circulated among the union’s rank-and-file members to gauge support for continuing the strike for back pay and major concessions. The 429 responses indicated 193 in favor of the motion, 45 percent of those who voted, but fell short of the self-imposed quorum of 350 yes-votes to mark a consensus.

For the religion department, the resolution to diverge from the strike’s pause is largely due to frustration over the bargaining committee’s decision to not demand back pay when accepting the University’s proposal to enter into mediated negotiations.

“The overwhelming demand was if you pause, you must get back pay or some other concession from the University. That’s not a decision that the bargaining committee made. We find that completely unacceptable,” Sam Stella, GSAS, said.

By virtue of the strike, a substantial amount of pending academic work has accrued. Canceled classes have created holes in course syllabi and the three-week absence of teaching assistants left many exams and assignments ungraded. Student-workers will now have to address this ungraded work in addition to coursework that was originally scheduled for the remaining three weeks of the semester.

Rather than automatically receive back pay for the three weeks of work that the union was on strike, graduate students have been given the option to make up the work that was missed while on strike and receive compensation. Miles Richardson, GSAS and a GWC-UAW bargaining committee member, called the decision by the University a “positive” development for the union.

“The bargaining committee made it very clear to Columbia that members of our unit will not make up work without pay because we’ve been on strike for three weeks,” he said. “Members of our unit were worried that if they went back to work, they’d be asked to do that much work in not a very large amount of time.”

The University’s proposal for compensating the workers’ withheld payments is conditioned on clearing the backlog of work before the end of April. The three-week payment will be allocated in lump sums and is separate from the attestations that non-striking student workers have been submitting throughout the strike. Specific instructions on the attestation period will be sent to those student-workers through their University email addresses.

“Student Officers of Instruction and Research who were on strike can choose to make up the work they missed and receive compensation for it in the amount lost during the strike. Those who choose to do so will have a one-time attestation window later in April that will require submitting a short description of the activities the student officer performed to make up the work,” a University spokesperson said in a statement.

Rank-and-file members who continue to strike are encouraging colleagues to abstain from the attestation portal, where student workers can verify their return to work to receive their wages. This move, they reasoned, “will help protect our fellow workers who continue to strike, and delegitimize a system solely designed to deprive [the graduate workers] of pay.” It also emphasized rejecting any make-up work as they continue to campaign for back pay.

“They’re simply asking us to do overtime, as it means between now and the grading period, we’re doing twice the amount of work that normally would be for the time that we lost,” said Stella.

While some workers scattered across departments have also continued to strike, the religion department’s coordinated decision to continue to strike autonomously stems from inter-departmental solidarity. According to Stella, the department’s student-workers are a tight-knit set of individuals who frequently converse over Whatsapp group chats and maintain strong communication with faculty. When departmental faculties were notified by the University that workers would be returning, the 14 religion department graduate students currently on appointment quickly congregated to solidify their stance.

“We got together and we had some sort of informal and impromptu Zoom meeting in which we discussed what we do. We need[ed] to let our faculty know whether we’re actually returning or not, and we need[ed] to make that decision together so that we can be prepared for whatever comes next. And overwhelmingly, there was a strong sentiment that we should continue striking,” Stella said.

Workers in the religion department are distributed across the globe and may face difficulty financing child care and securing leases. Additionally, financial relief is scarce—the decision to strike autonomously means that the workers do not have access to the UAW Strike Fund. The Columbia Workers Solidarity hardship fund remains active, having currently amassed about $180,000.

“I did not get into this job because I wanted to stand in the way of undergraduate education,” Connor Martini, GSAS and a graduate worker in the religion department, said. “I am here to facilitate that. I’m very invested in my students; I’m very invested in being a teacher. It’s my absolute favorite part of my job. But the conditions under which we are asked to perform that labor and the kinds of relationships the University wants to have with us is unsustainable is demotivating, is not decent, is not human.”

While religion remains the only branch with a department-wide strike, there is at least one student-worker on strike in 10 other departments. Mediation talks are set to begin at 3:30 p.m. EST on Thursday.