Somewhere between Broadway and Amsterdam Avenue, amid the bustling urban rush, lies a little world of peace. Located at 521 W. 134th St. between towering residence buildings, a garden welcomes visitors, enclosed by stout green bushes and a gray wired fence. Inside, children play games, adults grow and water various plants, and senior citizens lounge about on wooden benches. This is the Space of Grace Community Garden—a sanctuary for many residents of West Harlem amid the quick pace of city life.

Established four years ago on a vacant lot by the 134th Street Block Association, the Community Garden has grown into a cherished space where residents can socialize, unwind, and participate in leisure activities together. However, since the lot on which it is located is presently owned by a private company—the August Aichhorn Center for Adolescent Residential Care—rather than the city, the garden is unofficial, and residents fear that it will be displaced.

The founders of the garden initially received permission from the owners of the August Aichhorn Center to establish a garden on their lot. However, if the property is ever put up for sale or comes under different ownership, the garden’s future would hang in the balance, dependent on the whims of whoever comes next.

In order to take official ownership of the lot and ensure its permanence, the Space of Grace Community Garden, in partnership with Community Board 9, has opted to petition the New York State Attorney General’s office to be recognized as an interested party in the acquisition of the property. The garden’s leaders’ need for assistance with legal matters concerning the lot is what prompted them to reach out to CB9 two years ago and initiate the development of their joint plan.

Jonathan Thomas, co-chair of the Landmarks Preservation and Parks Committee of CB9, explained their underlying hope—that the petition would make way for the city to purchase the lot, which could then be turned over to Space of Grace as “community stakeholders” and then established as a permanent garden.

“In the past, the city has bought land to include as community gardens, so we know those options are available in general,” he said.

Community gardens first began to sprout up across New York City in the 1970s when a financial crisis forced many buildings into foreclosure, leaving a slew of vacant, abandoned lots on newly-acquired public land in its wake. Not only were the lots an unbecoming sight among the vibrant city landscape but they also became conduits for violence and organized crime.

Though it was created four decades later, the Space of Grace Community Garden was founded under similar circumstances. According to Maria Velez, a member of the garden’s committee which consists of eight volunteers from 134th Street who plan and organize activities, the garden was originally created in response to a period of shootings that caused many residents to fear stepping outside of their homes.

“People were afraid to leave the house, and they didn’t feel safe sitting outside,” she explained. “So we had a tenants association meeting. We thought it would be a good idea to use that space to get the people to come out and feel safe again, feel safe outside.”

Today, the garden has grown into much more than just a safe haven where residents can comfortably gather with one another outside of their homes. It has become a thriving center of cultural activity for the community, providing activities and opportunities for people of all ages.

“The Community Garden is great for the community. It entitles all sorts of benefits—health-wise, mental health-wise,” Thomas commented. 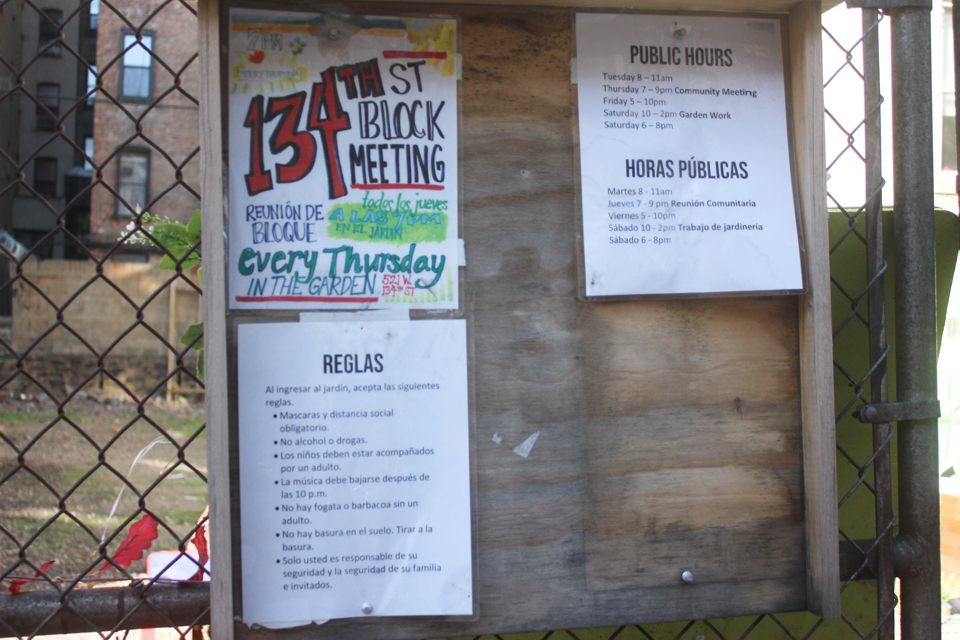 Not only has the Space of Grace Community Garden served the residents of 134th Street but it has also welcomed members of other neighborhoods and communities, as well as volunteer groups seeking to help expand the garden.

“People come from the next block too because last year a lot of people found out about the garden space from 133rd Street of Manhattan,” Velez added. “They just like to come around to sit and be peaceful.”

A national nonprofit called The Mission Continues, which provides military veterans with service opportunities in under-resourced communities, has also lent a helping hand to the garden in its development of new initiatives. This year on Martin Luther King Jr. Day, The Mission Continues organized a day of service for the garden. Volunteers came together to construct garden beds, a performance stage, and a shaded pergola.

The continued expansion of the Community Garden is another motivation behind Space of Grace and CB9′s resolution to petition the Attorney General, besides simply ensuring the garden’s permanence. While the garden committee has attempted to procure new tools and facilities for the garden, many of their efforts have been hampered because the garden is located on private property.

For instance, Velez and the other committee members reached out to GreenThumb, the country’s largest urban gardening program—which is sponsored by New York City’s Department of Parks & Recreation—in hopes of enlisting their guidance on several issues, but were ultimately turned away because the garden is not city property.

“We cannot really get help from the city or from anywhere else because [the vacant lot] is a private land,” Velez said.

The committee once asked GreenThumb for assistance in acquiring a permit for a part of a fire hydrant so that they could move toward establishing a source of water in the garden.

“[GreenThumb] said that because we’re on a private property, the owner would have to do that,” Velez explained. “So we just try to learn from wherever we can.”

If the petition moves forward and Space of Grace is able to acquire the vacant lot to register the garden legally, their hope is that GreenThumb will then be open to assist with the garden’s financial matters and provision of services. Until then, committee members will have to drive the growth of their garden largely by themselves.

Regardless of what lies in store for the future, Velez has big aspirations as to what the garden can provide for the community now. This summer, the garden will become a library for young children, providing them with free books to keep them steeped in learning between the warm, sunny days. It will become an expansive, living canvas for artists, lending its walls to two young women who will dress its slabs of brick and gray in brilliant murals of color. It will once again become an amphitheater for the band of musicians who lit up the neighborhood with joyful tunes last Halloween, joining the community together in a little world of peace amid the chaotic urban rush.

“I think most of the people that are hanging out in the garden, are people who just want a safe space to be,” said Velez. “A safe, peaceful space to be.”