Monday afternoon’s “Rally for 3rd Party Arbitration” on Low Steps. The proposed contract does not include access to neutral, third-party arbitration.

The Bargaining Committee for the Graduate Workers of Columbia–United Auto Workers announced Monday that after over two years of bargaining with Columbia for the union’s first labor contract, it is ready to present the contract for a ratification vote.

The Bargaining Committee voted 7-3 to recommendthe proposal, and it is now up to rank-and-file student-workers to vote on the contract. If approved, all members of the bargaining unit will be expected to adhere to the no-strike clause in the contract, which means student-workers currently on strike will no longer have legal protection. If the contract is rejected, the Committee will return to the bargaining table, and negotiations will likely continue into the new school year. The University team indicated during Sunday’s mediation session that it had presented its final offer.

“We are pleased to have reached a historic tentative agreement with the GWC-UAW that advances the interests of our graduate workers and strengthens the University academically and as an employer,” Katznelson wrote in a statement. “This full and fair agreement remains subject to ratification. In all, it marks a significant milestone in the University’s relationship with our graduate students, who contribute to the overall success of the University.”

It was important for the Bargaining Committee to win raises over two percent because GWC-UAW Local 2110, the union branch that GWC-UAW belongs to, sets union dues at two percent of gross pay. The union does not currently collect dues because formal membership does not start until the first contract is ratified.

As a result of financial hardship caused by the pandemic , the University is offering increases in summer stipends for doctoral workers on nine-month appointments with a $1,000 COVID-19 relief payment. Student-workers in their first five years of their program—or sixth in English and theater—can expect $5,000. In summer 2022, stipends for student-workers on nine-month appointments would then fall back to $4,500 and slowly subsequently rise to $4,750 in summer 2023, and then back to $5,000 in 2024, following the union’s acceptance of the offer. Doctoral students on nine-month appointments in their sixth and seventh years of study can expect a $1,000 stipend in the summer of 2021, but will not see a summer stipend for the following three summer terms.

The Committee also worked with Columbia to carve out new economic support systems for the unit. Bargaining Committee member and doctoral student Miles Richardson, who helped lead the campaign for increased health benefits, worked with the University team to establish a new health fund that totals $200,000 and intends to cover any out of pocket expenses, such as unexpected emergency room visits and getting dental crowns. The fund increases to $225,000 in the second year and $250,000 in the third year of the contract. Workers enrolled in the Columbia Student Health Insurance Plan will also receive a 25 percent discount on self-pay fees for additional services at Columbia Doctors Dentistry, which is up from 10 percent prior to the contract. Fully-subsidized dependent and individual premiums will be made available for doctoral workers in all schools and programs.

For the first time, student-workers on 12-month appointments are given two weeks of paid sick leave. The contract also provides grounds for student-workers to fight issues of late pay; if the University is unable to pay on time, then student-workers can take to arbitration. The contract doubles the parental subsidy from $2,000 to $4,000 and includes a side letter on COVID-19 funding extensions, which commits the University to providing additional resources for doctoral students whose research might have been postponed due to the pandemic.

“A lot of what this contract does is address the economic precarity that a lot of members of our unit face, and it’s a concrete improvement to them,” Richardson said. “When it comes to the final vote of whether to ratify or not, it’s a question of, ‘Do you want these protections now? Or do you want them at some indeterminate time in the future?’”

On the non-economic front, international student-workers also gained more rights. They now have the right to work remotely if they are stuck outside of the United States and to be reemployed after a lapse in immigration status or authorization.

Columbia has agreed to the National Labor Relations Board’s certification of the bargaining unit, which includes doctoral, master’s and undergraduate students, with the notable exception of casual employees who work less than 15 hours per week.

The GWC-UAW won the right to a union shop, where all eligible student-workers must contribute to the union, and failure or refusal to pay will result in penalty fees that will be paid to the Health Benefits Support Fund.

The most significant non-economic article that the two sides debated over was third-party, neutral arbitration for discrimination and harassment cases, and this demand was ultimately not met. However, the Bargaining Committee has sought to profoundly change the Office of Equal Opportunity and Affirmative Action, which is Columbia’s own system that hears these complaints, to make it more transparent and accessible.

If the contract is ratified, these changes will impact all students who file with the EOAA, regardless of union membership eligibility. Last month, the University announced that a new, independent appellate review panel made up of non-Columbia individuals will review cases. The union had added two new grounds for procedural appeal, if new evidence or a procedural mistake influenced the verdict.

“This submission represents a great enhancement, offering means to achieve the goals articulated by the GWC-UAW. Once in place, Columbia would have a more compelling process. That would be a great achievement for us all,” Katznelson wrote in a March 24 email to the University community.

During this week’s sessions, GWC-UAW was able to secure even more changes to EOAA. Complainants will now be able to appeal sanctions if they disagree with the EOAA’s determinations. If the EOAA finds that a student-worker should switch faculty advisors, the University is required to provide transitional support.

Student-workers can also view all evidence within their own cases, although the University maintained that they cannot make their own recordings. Members of the GWC-UAW also have the right to union representation as well as to receive status reports 60 days after the start of an investigation and every 30 days afterward.

“These changes are a response to the needs that we have heard time and time again from our unit. At the same time, they are just the beginning; these changes do not foreclose winning increased protections later, and gives us a solid ground to build on,” the Bargaining Committee wrote in a statement. “The contract serves as a basis for us to keep fighting both inside and outside the contract to make our unit more accessible for parents, international workers, and those with medical needs, and others who need it most. Our work has only just begun, and we look forward to building on this agreement.” 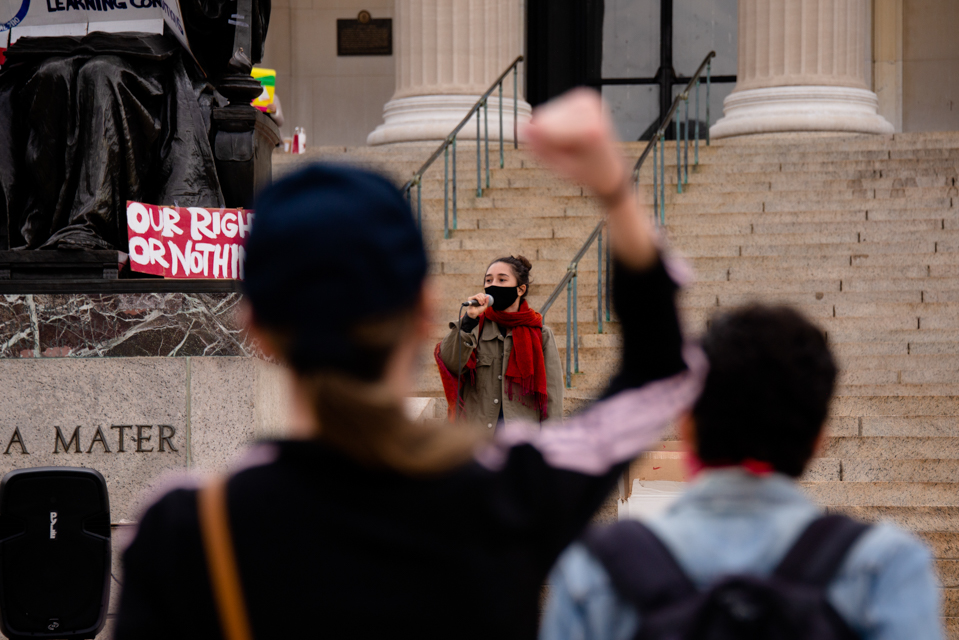 Just earlier on Monday afternoon, GWC-UAW organizers staged a small “rally against discrimination and harassment” at Low Steps, where teaching assistant and MBA student Katie Brehm spoke out against the EOAA. The issue is highly contested within the unit, and for that reason, the contract provides a clause that allows the GWC-UAW and Columbia to check in after 18 months in order to review the efficacy of this contract. The University will also have to consult the union if it makes any significant changes to Title IX procedures.

“Through their first contract, GWC has won a new precedent in higher education labor organizing by bargaining directly over EOAA protocols that extend beyond the unit to affect each member of the university community. On Monday, they continue their fight to strengthen procedures that will offer real recourse in building a more inclusive university,” organizers of the GWC-UAW rally said in a press release.

Both sides considered third-party, neutral arbitration as the largest outstanding issue at the table. Amelia Spooner, a fourth-year doctoral student in the history department, said the Bargaining Committee’s concession has been disparaging for strikers who made this demand their central focus. She said that student-workers have felt increasingly discouraged because of the disconnect between the Committee and the unit.

There is tension between some rank-and-file members and the Bargaining Committee over reaching a contract through mediation in the first place, with rank-and-file members claiming that the Committee is acting undemocratically. The GWC-UAW and Columbia have been negotiating the contract for over two years, but when bargaining discussions failed last month, the parties agreed to enter into mediation with federal mediator Andrea Cancer.

The union announced its intention to strike beginning on March 15, and for three weeks, student-workers had been taking to physical and digital picket lines. Local political candidates marched in solidarity, and even Senate Majority Leader Chuck Schumer tweeted in support of the strike. The Bargaining Committee, however, ultimately voted 7-3 on April 2 to pause the strike in order to test the efficacy of mediation.

Individual student-workers and graduate students in the religion department have continued striking despite the pause, and three members of the unit have filed a complaint with UAW Local 2110. The complaint was also filed by one student-worker of the sister union, the Union of Graduate Employees at New York University, which is also on the verge of striking.

They consider the complaint “a last resort” measure to reform not just the Bargaining Committee, but the system that supports it. They said that throughout the bargaining process, the union has made decisions without consulting the unit.

“We see ourselves as taking advantage of a mechanism that was put into place for good reasons, which is to create accountability within the organization of UAW and to ensure that these kinds of infractions do not continue,” Cook said. “Not because they’re infractions, but because they damage unions. Because they hurt the labor movement. They hinder the really important collective power that people are able to build through unions, and so that is my vision of this charge.”

It is much more difficult to maintain bargaining power over the summer, since fewer members of the unit are on campus or conducting work. The deadline to submit grades for graduating students is in less than two weeks, so student-workers are under pressure from the academic calendar to if they hope to reach an agreement by the end of the academic year.

After over two years of bargaining negotiations, student-workers have the chance to establish themselves as a formal union. The impending ratification vote will indicate if the contract successfully meets the union’s demands.

The ratification vote will begin on Wednesday, April 21 at 9 am and will close on Friday, April 30 at 5 pm.